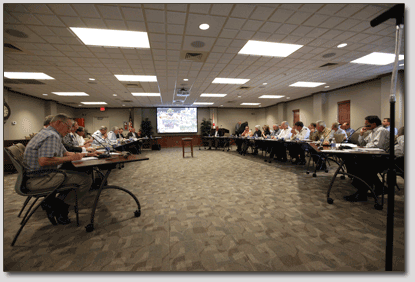 Over the past few years, many senior officials in Pacific Island Countries and Territories (PICTs) have noted an increased number of regional coordination and governance mechanisms, and regional meetings.  This is particularly true in the health sector where regional approaches have proliferated and, along with them, invitations to a multitude of meetings.  Given the capacity constraints and small size of many PICT ministries, the multitude of invitations to a growing number of meetings has become a source of concern.

Along with Chris Morgan and Rob Condon, we examined regional health mechanisms and meetings in the Pacific in a project supported by the Nossal Institute for Global Health’s Health Policy and Health Finance Knowledge Hub.  The Quintilateral Group of development partners in the health sector in the Pacific (World Bank, WHO, NZAID, AusAID and SPC) acknowledged the lack of analysis of the situation in the Pacific, and collaborated with us on the study.

Of most concern was the high number of separate meetings that PICT officials were expected to attend on HIV and sexually transmitted infections (STIs).  Thirteen of the 66 meetings concerned HIV or STIs including meetings organised to manage Global Fund planning, separate meetings to review Australian/New Zealand HIV funding, specific WHO Asia-Pacific technical meetings as well as US government annual meetings for the US-affiliated countries in the North Pacific.

Over the past few years, AusAID has directed substantial amounts of its Pacific health funding to regional mechanisms often managed by the Secretariat of the Pacific Community.  Funding for HIV and non-communicable diseases in particular have been channeled through SPC and then individual countries can access the funding.  In the process, SPC’s health team grew considerably but many PICT interviewees regarded the model as inefficient and ineffective.

The high number of regional health meetings represents a substantial time and cost impact on senior health officials with some spending as much as 50% of their time out of the office. PICT officials lament being constantly invited to meetings, with some citing several invitations in the same week by the same agency.  Whereas larger MOHs generally have several officers to cover each technical area, smaller countries often have just one or two staff managing across sexual and reproductive health, HIV and communicable disease control. The smallest PICTs may have just a single public health officer. A representative quote from one PICT interviewee stated that the meetings “eat into his ability to carry on core business.”

As an example, one health official had twelve trips scheduled for 2010 which included a remarkable five visits to the continental USA, each consuming up to two weeks of the individual’s time. Over the course of the first five months of 2010, another individual was out of the country for 41 days which equates to approximately 27% of the individual’s time.  The duration of the meeting is often only one portion of the time out of the office for health officers given infrequent flight connections between scattered island states. One interviewee noted that for a three day meeting inFiji, he is out of the office for ten days revealing the extended opportunity costs of regional travel.

The interviews revealed that, according to one PICT official, there is a “growing uneasiness, a sense that things are getting out of control”, concerns about high transaction costs and duplication, and the view that good regional governance is, as another interviewee expressed it, “a challenge and a struggle.”

PICT representatives were more positive about some meetings than development partners, noting the opportunity to learn from Pacific counterparts if the meeting format promotes open information sharing, or if the meeting is on a specific technical or programmatic topic relevant to their work.

However PICT officials noted that several existing mechanisms are poorly facilitated and can be intimidating; they preferred meetings that encouraged open discussion. Informants noted that continuity of staff presence is sometimes poor and that follow-up in-country is often insufficient, due to a lack of capacity and/or difficulty in adapting regional discussions to national priorities.

The study highlighted the continuing tension between regional and country-level approaches for technical assistance and development funding.  Substantial amounts of health funding to the region has been delivered to the regional level through regional organisations with concerns about effectiveness, funding amounts and the scale-up of regional management systems at the expense of on-the-ground impact.  In a sign of positive momentum, a number of the bilateral and multilateral organisations in the region have started to shift to a more country-focused approach.

Based on our interviews, we found that PICT officials seek meetings that provide broad opportunities for sharing experiences and critique meetings driven by only one development partner for one particular agenda.  They seek mechanisms that reflect national priorities and more effective and inclusive consultative processes. There was general consensus that there should be consolidation of some mechanisms – particularly those created for various HIV-related funding sources.  Many also called for the development of independent facilitation capacity to improve meeting legitimacy and effectiveness.

The proliferation of mechanisms and meetings has been particularly pronounced in the health sector globally and perhaps this situation is not of as much concern in other sectors such as education or water.  But there seems to have been a fundamental misunderstanding in the Pacific between issues that require a regional response (such as cross-border influenza prevention or regional health worker accreditation) and issues that affect multiple countries in the region (such as diabetes) that require national responses (and which of course could benefit from some cross-country sharing of experience).

There have been some suggestions that AusAID and other partners might shore up their country-level engagement rather than relying on regional mechanisms (which are easier for donors to manage and therefore seen as preferable by some).  But much more needs to be done including merging or cancelling some of these regional mechanisms.  A country-focused context-appropriate approach would be more in line with the country ownership objective espoused in our aid effectiveness commitments.