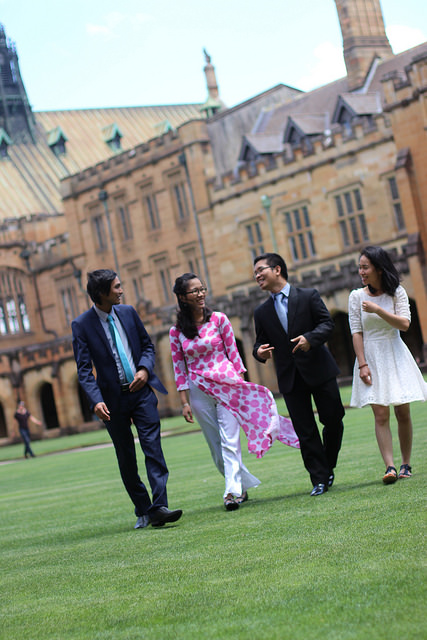 The recent ODE evaluation of the contribution made by Australia Awards scholarships to women’s leadership should be applauded. It is important to think through how effective the awards are, what data and methods we have to assess their effectiveness, and what buried factors might deflect their best aims.

Research around women in political roles [pdf] confirms that there is a relationship between women’s leadership and other desired outcomes, such as an increase in community services including health services, sanitation, and child care. However, as the ODE report recognises, the scholarships’ contribution to getting women into leadership roles is harder to prove. The report finds that scholarship programmes do contribute to women’s professional advancement. However, high rates of unemployment and low rates of promotion are continuing challenges for women. The scholarships help partially by increasing the recipient’s ‘soft’ skills (e.g. confidence, self-belief, open mindedness). Actually getting promoted is another thing. The report also finds some contradictions around advancing women via the private sector as opposed to the public sector.

Initially the report finds that women working in the private sector or civil society were more likely to report professional advancement and promotion and leadership possibilities. We can compare this with the research done by Joel Negin and colleagues on the impact of scholarships on strengthening the health system in Kenya, Uganda and Mozambique, which had similar findings with some variations. There, women found it difficult to get work in specialised areas in public health. Many had to move to different jobs a few times before they found a suitable position. The same study found that alumni considered soft skills and personal attributes to be the most important things gained.

Both the ODE report and the study by Negin et al. found that alumni associations are important. However, they need to be deployed much more effectively to produce their full benefit. The networks they facilitate are welcomed socially (which can have spin-off effects, for example, on recruitment) but they often lack clear purposes beyond that. Although they have a function in diplomacy terms, they need to be better resourced and run (including regularly updating their databases). The recommendations for using short courses like workshops/seminars as well as mentoring/coaching relationships to support and build alumni networking and engagement should be tailored to facilitate women’s leadership.

These findings are not only contrary to previous findings (e.g., Webb, 2009, Negin et al.), but also contradict some of the findings of the report. Throughout, the private sector was championed as the place for women’s professional advancement. Some of the recommendations were made based on the success of women in the private sector. For instance, recommendation 2 – increasing scholarships to the private sector – is counter-intuitive considering the public sector is the more deprived in terms of skilled human resources. Both need to foster a different way of seeing women as leaders.

The report is also slightly deficient in thinking about the relationships to men. This matters because returning women do not operate in a vacuum, especially when they return to societies that have strong patriarchal leanings and customs. Although some men were included, it is not immediately clear how many men were interviewed from the various cases. There are positives here for women if the scholarship process has the potential to change the viewpoint of male scholars on gender equity. This might lead to recognising that male domination, rather than women’s lack of capacity, is the main cause of women’s lack of representation in actual leadership roles.

I applaud the report for discussing the structural barriers that have slowed women’s progress in some countries. It clearly lays out the existing disparities between men and women. This, and thinking about how to address the remaining barriers, is an important starting point for achieving equality for women. Creating equal opportunities for women is the cornerstone of bringing about lasting change in communities. Addressing structural barriers forces us to confront complex issues regarding gender equality and pushes us to consider a more coherent and ‘all of society’ approach.

Scholarship programs themselves have to operate within the structural conditions, but it is hard sometimes for them to locate concepts such as an inequality-producing, existing gender order. For example, can scholarship schemes realistically reconfigure gender roles or the sexual division of labour in the recipient countries? Maybe that is beyond their reach or remit. That would be a very radical agenda if it was made an explicit and overall aim.

Certain aspects of the evaluation could have been improved or made clearer. As noted, there needs to be clearer thinking about the link between scholarships and professional advancement on one hand, and scholarships increasing women’s leadership on the other. The report offers evidence on promotion and numbers, but that is not the whole story in itself. This connection is made more complex by the fact that some women may have had promotion opportunities before receiving a scholarship. Equally assumed, but more complex on examination, is the idea that promoted women will act so as to increase gender equity overall. Their personal views and politics must be taken into account. They may want to remain in power, and be respected by men (Margaret Thatcher is a good example of this), but they may not pursue a progressive agenda.

Returning to the issue of prior positioning, we would need to establish a baseline (for example, knowing if promotion opportunities existed before the scholarship). There is also the problem of the counter-factual case – whether these women would have been promoted anyway. Here the quantitative data was deficient. It is thus not easy from the report to isolate the specific influence of the scholarship from other factors in the global tracer study analysis.

The inclusion of Africa in the tracer study analysis and the report in general is quite superficial. Only eight African women who attended the “women in leadership” forum were interviewed, and it is not clear how the men in the study were selected. The impression is that the analysis included all regions, but gave little space to Africa.

Other complex questions cannot be readily addressed using our current state of reporting. For instance, is it true that the scholarships are life-changing for women’s lives in developing countries? Are the scholarships mostly empowering women of a particular (elite) social class? If so, how does this affect leadership and social equity issues?

The availability of scholarships in specified sectors of the economy also has unintended consequences. Prioritising agriculture and extractives indirectly skews gender ratios. While both industries have comparatively high rates of women working in artisanal roles, relatively few of these women meet the eligibility requirements of the scholarship program. Furthermore, women often deliberately choose other areas, such as public health, because they are more family-friendly.

The report is a useful starting point, but much more work is needed to realise real and lasting change on the ground.

Rose Amazan is a lecturer in Contextual Studies at the University of New England’s School of Education. This post is based on her presentation given at the Australian aid evaluations forum held at ANU on 20 April 2016.

Rose Amazan is a lecturer in Contextual Studies at the University of New England’s School of Education.