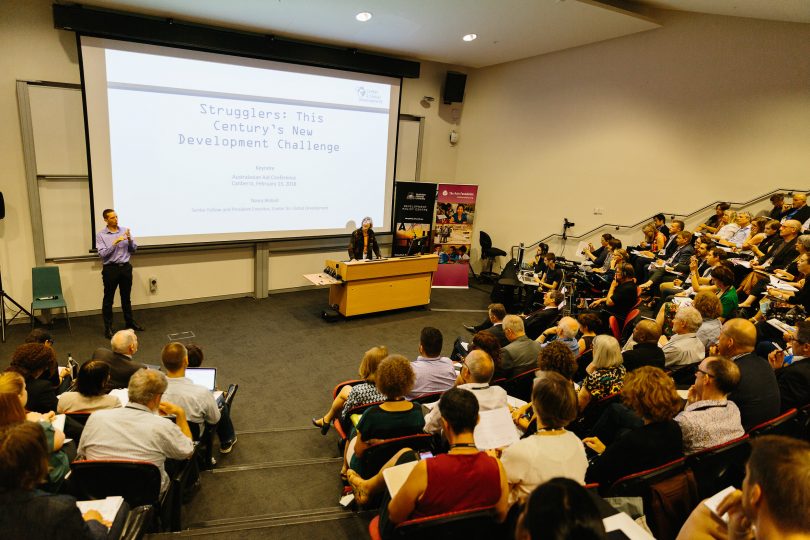 Mohamed Bouazizi is the man whose protest sparked the Arab Spring in December 2010. Bouazizi, shown in the second slide here, was a typical “struggler,” as in the title of my keynote speech at the Australasian Aid conference several weeks ago: “Strugglers: this century’s new development challenge.” Below is a rough summary of my talk. (I have modified the slide titles slightly to better convey the gist of my remarks.)

Bouazizi was a street vendor in his early 30s in a small town in Tunisia who triggered uprisings in the Arab world by immolating himself. He was not poor — in fact, he gave to the poor in his town. He supported a younger sister, hoping she would finish secondary school and attend university. But the police regularly harassed him, whether for a bribe or for the permit he allegedly needed to sell produce from his vegetable cart in the open market. The day he took his own life, the police had destroyed his cart and seized his electronic scale and the produce he had bought the day before on credit, depriving him of the assets on which his livelihood and that of his family depended. His protest was apparently a reaction to an acute sense of injustice in a system in which the institutions of the state brought predation rather than protection for people struggling day to day to earn a living.

Who are strugglers exactly? In crude income terms, a struggler is a member of a group (see this 2013 paper) wedged between the world’s poor (living on $1.90 a day or less, the World Bank international poverty line) and the secure middle class (at least $10 a day in household income per capita, PPP). The probability that a struggler will fall back into poverty is high (slide 4).

Like Bouazizi, strugglers have fallen between the cracks in development — they are a forgotten majority, the new poor of the twenty-first century. They comprise about 60 percent of people living in developing countries today and are likely to still comprise about 60 percent in 2030. They are heavily concentrated in middle-income countries, including upper- and lower-middle-income countries, using World Bank country classifications (slide 8).

Most strugglers have primary education or more, and most are probably informal workers in peri-urban and urban areas, working without the regular paystubs that provide a sense of security to workers in the formal sector. Except in Latin America, they benefit little from public pension and health insurance programs; in many developing countries they are net payers to tax systems, unlike the traditional poor, who are more likely to receive cash transfers.

As a group, strugglers have benefited more from growth since 1990 than any other income group (the elephant graph, slide 16). Perhaps as a result, they probably have high expectations for a better future for themselves and their children. Like Bouazizi, who hoped to see his sister enter university, many have middle-class aspirations — if not for themselves, for their children. They are strivers as well as strugglers. But they live anxious, stressful lives, in which a health crisis for a family member, or a sudden increase in bus fares, or the loss of their minimal “capital” to thievery or a local weather disaster, can mean a choice between the monthly rent or adequate protein in their children’s diet.

What are the implications for students of development? One has to do with good governance and accountable states. Strugglers, unlike members of the secure middle class, have little capacity to pay taxes and hold accountable their own governments. But the middle class is still small in most countries of the developing world — between 5 and less than 50 percent almost everywhere. Most developing countries are “struggler” states.

Another implication relates to jobs, productivity, and adequate livelihoods. What can governments do to support increased productivity (and thus earnings) of the billions of struggling people, including children, who are informal workers — short of providing them with credit, training, and police protection in their homes and on the street? Would increased provision of tax-funded social insurance help? For development advocates and thinkers, this challenge is immediate and pressing — compared to the slower-evolving prospect of job-stealing robots and artificial intelligence in the rich world.

For other policies to ponder through a struggler lens, including the role of outsiders, see slides 28 and 29. And please weigh in with comments, concerns, and ideas.

Sources are shown on slides. Many thanks to Kyle Navis for help with the presentation.

This blog post was originally published on the Center for Global Development’s blog, and is based on the keynote address at the 2018 Australasian Aid Conference. Watch the livestream replay here.

Nancy Birdsall is President Emeritus and a Senior Fellow at the Center for Global Development.