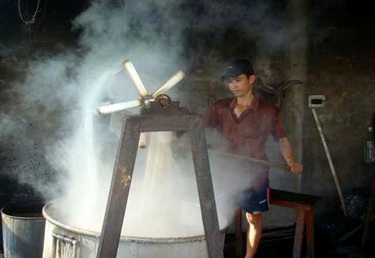 A new Devpolicy Discussion Paper “Crafting Sustainability: Managing Water Pollution In Viet Nam’s Craft Villages” reports on the underlying causes of pollution in Vietnam’s Red River basin, and policy options to redress these. The Discussion Paper presents the findings of a three-year AusAID-funded study by ANU and the Institute for Policy and Strategy for Agriculture and Rural Development in Hanoi.

Like many small and medium enterprises (SMEs) in the region, craft enterprises are usually small, informal, with low margins, many competitors and a low capacity and willingness to invest in new technologies. They are often founded on very limited or insecure access to critical resources such as land and capital, making investment in better technologies a very difficult prospect. Relationships between craft producers and government at various levels also tend to be low on trust. Although social relationships within craft villages are strong, specific rules and processes do not yet exist to deal with pollution and waste management, and may need facilitation by civil society or government if any form of community collaboration on waste management is to proceed.

The study finds that current government policies treat craft villages in much the same way as larger scale industry, focusing on direct regulation, pollution fees for individual polluters and public education. However, such approaches are failing, given the economic significance of crafts for rural livelihoods and weak state capacity to monitor and regulate countless small-scale, dispersed and interdependent craft producers. Craft producers, like other industries, want to know that they are not acting alone, but that other producers are also bearing the costs associated with pollution reduction. Yet they lack confidence in the government’s capacity to evenly and fairly implement policies to regulate pollution in other villages and provinces. Furthermore, issues such as forced land acquisition in the urban periphery (e.g. on the outskirts of Hanoi) creates an uncertain future for craft producers. Some have already lost workshops to urban development, which further diminishes their willingness to invest in low pollution technology or waste treatment.

The study makes the overarching point that  rural industries are qualitatively different to large-scale industries and require different strategies to manage their environmental impacts. Addressing pollution in craft villages needs more than tight regulation. A more tailored and integrated approach to craft village pollution abatement is needed, which takes account of the capacities, resources and livelihood imperatives of small-scale craft producers. There is a pressing need to facilitate effective coordination and collaboration between entrepreneurs and government, based on stronger relationships and trust. Improved intra-government coordination is also a priority, both horizontal and vertical at different levels of government. In particular, the role of commune authorities in environmental management has so far been marginal, yet amongst government actors local officials arguably demonstrated the clearest understanding of the issues, impacts and imperatives around the problem of craft village water pollution.

Dr Sango Mahanty is a Research and Teaching Fellow at the Australian National University, with a focus in natural resource management, studies of Asian society and environment policy.