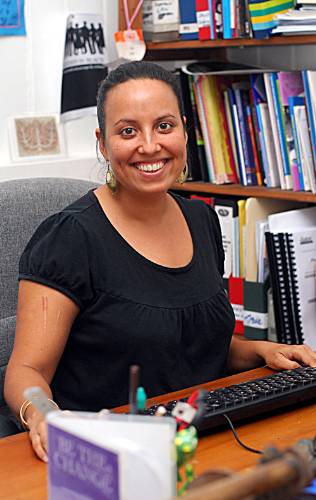 Whilst in Fiji recently, Tess Newton Cain met Tara Chetty of the Fiji Women’s Rights Movement (FWRM). You can listen to a podcast of their conversation here or download the full transcript here. But for the edited highlights of what they discussed, read on.

FWRM participation in the constitutional process in Fiji

We started our discussion with how the FWRM had been working within the context of the processes around developing a new constitution for Fiji. The FWRM has been part of a wider Women’s Forum, which undertook a range of activities with particular focus on promoting women’s participation in decision-making. They achieved considerable success in relation to the Ghai draft (e.g. inclusion of special temporary measures to ensure more women in Parliament). However, its rejection by the interim regime and replacement with a radically different document posed a significant challenge. Working within the wider People’s Forum, the members of the women’s forum continued their work of creating a “democratic space in a non-democratic context”:

“So the People’s Forum, which was made up of all different sectors, became a sort of people’s constituent assembly where we debated — we had been looking at the Ghai Draft — but then very quickly mobilised to have a look at the government draft as well and compare them, and of course we came out with some big concerns about the absence of women in the government’s draft and the paring down and limiting of rights in the government’s Bill of Rights.”

A particularly significant aspect of how the women’s forum reacted to the dislocation of the process by the interim regime was its ability to caucus and mobilise quickly. They moved rapidly beyond mere reaction and shared a gender analysis of the revised draft to help others respond knowledgeably to the government draft in a very short time-frame

The very particular political context in Fiji presents a major opportunity to move away from ‘business as usual’ when it comes to promoting women in politics:

“I think that any point of disjuncture, when the social contract is being renegotiated, provides an opportunity. The Pacific as a region has the lowest (among the lowest) representation of women in formal decision-making. As we’re embarking on kind of a return to democracy and we’re creating a new framework, perhaps now it is really important to keep pushing this: this is the moment to push this agenda.”

In terms of methods available to capitalise on the opportunity, focus is now shifting from what goes into the constitution to working with political parties to support female candidates, up-skilling women who are seeking election and raising awareness among the voting public about inclusive leadership and representation.

However, there are also some very significant challenges to be faced. In particular, the military-run state is inherently hostile to women and has demonstrated a particular antipathy towards ensuring women participate as elected representatives. In addition, prevailing social norms in Fiji are essentially conservative. Although there are women chiefs, women generally occupy subordinate positions in Fijian households.

As is the case elsewhere in the Pacific, gender-based violence is a serious issue in Fiji. It is a very particular manifestation of the same social norms that undermine the status of women more generally and social acceptance of women as political representatives. Within civil society, the Fiji Women’s Crisis Centre provides the lead in this area. Their work has indicated that the machismo associated with military rule, combined with a political crisis, plus the associated socio-economic problems has likely worsened gender-based violence. Not only that, but there has been a ‘rolling back’ of positive measures such as the effectiveness of ‘no drop’ policies as a result of militarisation of the police services.

The wider political landscape in Fiji

The impact of a prolonged period of military rule on the amount and nature of political engagement is very significant. In particular, young people are highly disengaged from political processes and activism because it is not something they are familiar with:

“…most of their experience has been in a military state, so they don’t have experience of what it means to be an active citizen in a democracy. And they are really going to be facing serious challenges in trying to make decisions about picking leaders and their expectations of what a democracy is as voters.”

Although there are certainly pockets of young people involved in pro-democracy work in Fiji, there is still a lot to be done to try and engage that group in the wider process in the lead up to the 2014 elections.

The future role of Fiji in the Pacific region

Despite current political and economic difficulties, Fiji continues to be a hub for the Pacific as a whole. Its exclusion from the Pacific Islands Forum has meant that it has focused on other relationships, including within the Melanesian Spearhead Group whose influence is growing. Other countries in the region look to Fiji and observe how it is conducting itself politically and diplomatically:

“It’s really important to take Fiji back to democracy and to try to get that democracy working from a human rights based perspective … because of its influence across the region.”

Tess Newton Cain is a Research Associate at the Development Policy Centre. Tara Chetty is Program Director at the Fiji Women’s Rights Movement.