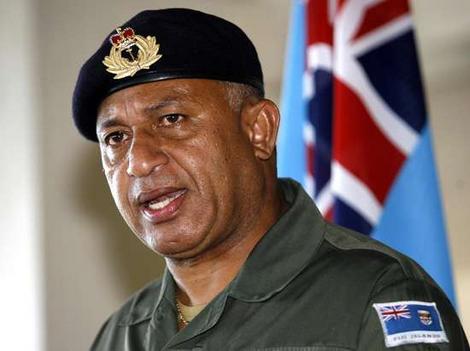 This time last year, I offered Pacific predictions for 2012: you can see them here. Looking back, I didn’t do too badly, so I thought I’d have another go this year. There will no doubt be many other highlights and key moments but here I identify some of what I think will be the big ticket items, under the headings of politics, economics, and regionalism.

In 2013, citizens of a number of countries in our region will go to the polls. Parliamentary elections will be held in the Federated States of Micronesia on March 5th and in French Polynesia across two rounds scheduled for April 25th and May 5th. Nauru is expected to have both parliamentary and presidential elections this year, with the dates yet to be confirmed.

Following last year’s national elections, Vanuatu has a new Parliament and a ‘new’ coalition government, which bears some resemblance to the last one. The sudden death of Harry Iauko (the influential minister for infrastructure and public utilities) at the end of 2012 necessitates a by-election in the Tanna constituency. In addition, a number of election appeals are before the Supreme Court (including one lodged by veteran MP and former Finance Minister Willie Jimmy to challenge the eligibility of the prime minister to contest the elections). Whilst it is possible that the opposition may lodge another motion of no confidence early in the year, the coalition government’s majority is so small that any by-elections as a result of election appeals to be heard in March (plus the one on Tanna) could have a significant impact in their own regard. Provincial elections will be held in Vanuatu on February 12th. Notably, SHEFA province (which includes the island of Efate but not Port Vila which has a municipal council) has determined that 25% of the seats are reserved for women candidates.

There were also of course elections in 2012 in PNG. The wash up from these was discussed in yesterday’s Devpolicy blog post.

The particular case of Fiji is discussed below but constitutional reform is going to feature highly in Papua New Guinea in 2013 and there have also recently been calls for aspects of the Vanuatu constitution to be amended. A draft federal constitution for Solomon Islands was prepared during 2011 and during 2012 there was a series of provincial and overseas consultation conventions. It has now moved into its ‘finalisation’ phase, which includes a national convention scheduled for this year.

And so to Fiji. This time last year, the lifting of the public emergency regulations by the interim regime was greeted with cautious optimism. Fast-forward to 2013 and the year could not really have got off to a worse start. After what looked like twelve months of fairly solid progress along the road back to democracy, the recent furore, which started with the release of the draft constitution prepared by Professor Yash Ghai’s constitutional commission, may have jeopardised the entire process. The interim prime minister and the president have made recent announcements stressing that the process is still continuing, that there will be an amended draft constitution by the end of January for consideration by the constituent assembly (whose members have yet to be announced), that there will be a new constitution in place by the end of the first quarter and that elections will indeed go ahead next year. Fiji may well have a new flag by the year’s end but, in the absence of tangible steps towards the reinstatement of democratic government, this is unlikely to satisfy many who had anticipated so much more.

In 2013, while the Pacific region as a whole is expected to slow, Melanesia will continue to leave the rest of the Pacific behind in terms of economic growth (see graph below). Vanuatu is expected to do particularly well on the basis of renewed growth in tourist arrivals. Growth in PNG (discussed here) and Solomon Islands is projected to slow, but will likely remain above 4%, better than anywhere outside of Melanesia. 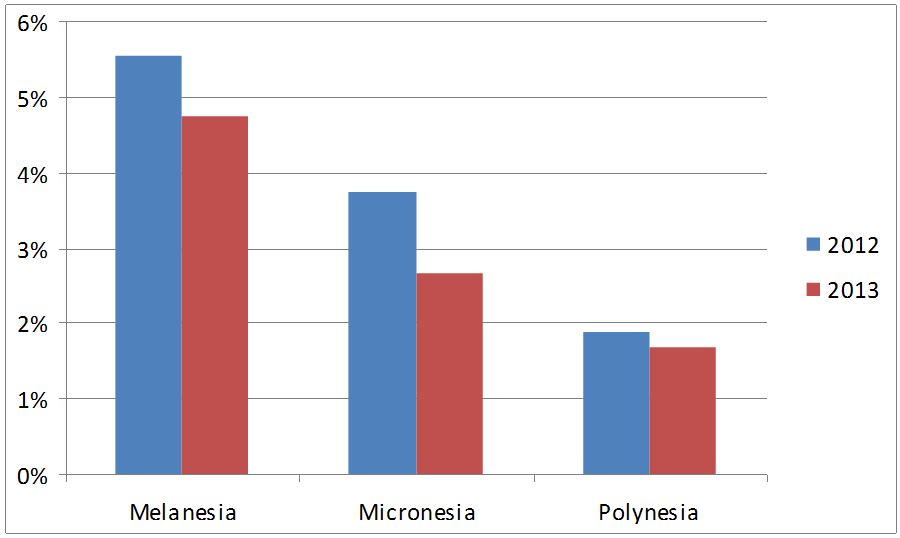 Fiji will unfortunately remain the Melanesian non-performer. The interim regime in Fiji has forecast growth of 2.5% for 2013 but the ADB is more conservative at 1.7%. It’s not all bleak in Fiji. It is generally acknowledged that the Bainimarama government has pushed through a number of pro-business initiatives. And investment in the Fiji economy is recovering, and with it GDP growth, though only so far to modest levels. Moreover, as has been noted elsewhere, political instability has had a damaging effect on investment overall and recent events are not likely to improve that situation in the short term. And the recent cyclone and floods are likely to hurt agriculture and tourism.

Outside of Melanesia, tourism improved in Samoa in 2012, giving some hope for 2013, but December’s Cyclone Evan will damage both agriculture and tourism prospects. The ADB is maintaining its expectation of 2.5% growth for Samoa, arguing that there are likely to be short term impacts both positive (increased remittances to assist with recovery and rebuilding-focused stimulus) and negative (agricultural losses and possible downturn in tourist arrivals).

Not much happened on the regional trade front in 2012 (with little progress on either EPA or PACER Plus) and expectations are low for 2013. On labour mobility, the latest numbers from Australia’s Seasonal Worker Program (1, 237 for 2012 up till end-November) suggest the numbers have stabilised at around 100 a month (compared to NZ’s more than 500 a month under its Recognised Seasonal Employer scheme). What to watch for in 2013 is whether some of the new sectors introduced into Australia’s SWP take off (sugar cane, cotton, aquaculture).

It is possible that the most significant thing to happen in terms of Pacific regionalism in 2013 is the review of the Pacific Plan to be undertaken by a team led by Sir Mekere Morauta. It is likely that this process will (re)open a number of conversations about the future of regionalism, the ongoing significance (or otherwise) of the Pacific Islands Forum and what, if anything, should be done about the (still not officially released) report of the review of the Pacific Islands Forum Secretariat (PIFS). The availability of a website portal where people from around the region can make their own submissions to the Pacific Plan review team is innovative. However, whether the generally moribund Pacific Plan can be revived remains to be seen.

Sub-regionalism will likely continue to be a focus of a great deal of political, diplomatic and economic activity during the course of 2013. Whilst it is to be expected that the Polynesian Leaders’ Group and the Micronesia Chief Executives’ Summit will continue to develop their approaches and mandates in the coming months, it is undeniable that, for a number of reasons, all eyes will be on the Melanesian Spearhead Group (MSG). The MSG celebrates its 25th birthday in 2013 and has elected to meet in New Caledonia to celebrate that milestone. We can expect to see further progress on trade negotiations between the member states, including removal of tariffs on imports and implementation of the agreement regarding movement of MSG citizens within the sub-region.

Recent developments indicate that ‘the Fiji question’ is likely to dominate all else within the workings of the MSG and at the regional level. What happens in Fiji over the next few months has the potential to cause a huge amount of division within the Pacific Islands Forum and/or the MSG with ramifications that could seriously hamper any attempts to (re)develop regionalism as a meaningful strategy to support development.

The evolving roles of individual Pacific island countries and the region as a whole in the wider geo-political and diplomatic space will continue to be watched with interest. Once again, developments in Fiji will be keenly observed. Close to home, Canberra and Wellington have only very recently returned from non-engagement with the regime and, given very recent events, this has prompted criticisms in some quarters. Further afield, Fiji will take up the influential position as chair of the G77 plus China grouping (numbering 132 countries) and will no doubt be looking to capitalise on that as much as possible.

Note: thank you to Professor Stephen Howes of the Development Policy Centre for his assistance with the economics section, especially the graph.