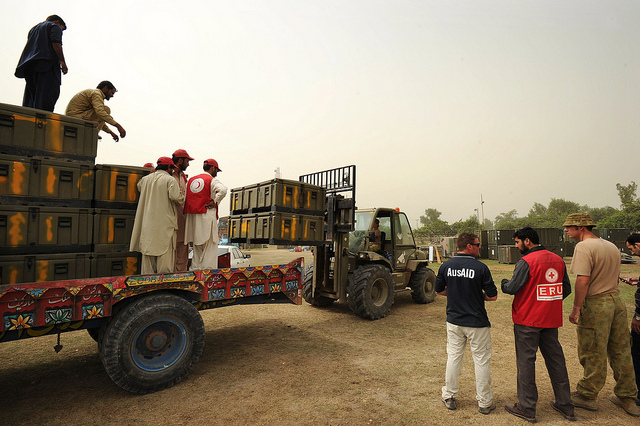 With a steady evolution of global events over the last six decades, today’s aid architecture has become far more complex, involving a range of actors, structures and processes. In Pakistan, the aid establishment is now substantial. As of 2013, there were 32 official bilateral and 12 official multilateral donor agencies (plus 18 UN agencies) operating in Pakistan, managing some 2094 project activities (OECD, 2015). At the recipient end, 38 divisions of 33 federal ministries and around 150 provincial departments and their executing agencies in the four provincial governments interact with these 44 official donor organisations to manage foreign aid in Pakistan. Further, some rough estimates suggest that there were around 100 INGOs, 200 consultants and some 15,000 to 20,000 NGO/CSOs operating in the country. The presence of these numerous actors in the country, their contrasting priorities for the development process, and overlapping project activities add up to the complexity of aid delivery in Pakistan.

In my research paper for the 2017 Australasian Aid Conference – titled ‘The Aid Policy Network in Pakistan: Actor-Network Analysis’ – nine strategic groups of actors in the aid policy network in Pakistan were identified. All these actors or groups of actors play roles in managing the aid policy process based on their position in the network, policy interests and the resources they carry. Since there is a need to understand the network structures and processes shaping foreign aid decisions, the paper offers a renewed understanding of the complexities, interdependencies and constraints involved in managing the aid policy process in a recipient country such as Pakistan. In so doing, it contributes to the understanding of aid effectiveness.

Exploring the complex linkages and interdependencies between actors of the aid policy network, my research suggests that carrying an important or less substitutable resource (such as a large volume of funds) does not necessarily guarantee an influential role within the network. For instance, despite being the largest official bilateral donor to Pakistan, China was not considered as influential as other major bilateral donors. This was perhaps due to the limited involvement of Chinese officials in policy forums and public policy debates concerning the Millennium Development Goals (MDGs), and restricted communications with other development partners. Similarly, in strategic bilateral relations, Asian and Gulf bilateral donors were sometimes considered to be more trustworthy development partners than USAID and the Western (OECD-DAC) bilateral donors. This perception of the respondents was widely based on the trade and economic sanctions Pakistan faced in the past at the hands of Western donors.

After decentralisation, Pakistan experienced a large-scale restructuring of governance at the provincial level during 2011-2013. As a result of this, 17 federal ministries/divisions, which previously interacted with development partners on the MDGs, have been devolved to the four provincial governments. These new institutional arrangements will have an impact on managing aid policy processes and network interactions. This would lead to extensive engagements with numerous actors, capacity constraints at the lower tiers, readjustments of coordination and collaboration practices, and higher transaction costs. More interestingly, at present four different political parties have governments in the four provinces of Pakistan. Each province, led by a different political party (or alliance), thus has different political manifestoes and development priorities. Eventually, this has made the aid delivery system in Pakistan even more fragmented and complex, operating at multiple levels.

Last but not least, many of the problems of international development aid are known to the actors involved in the aid delivery system in Pakistan. However, there has been a lack of collective action on practical steps to make foreign aid more effective that adds to the complexity of the aid policy process. Evidence suggests that donors tend to be pro-active and aid seems to be supply-driven in Pakistan, partly due to the absence of an inclusive actionable development policy framework and the limited capacity of the state. This provides opportunities for donors to dominate the policy debate and pursue their own priorities.

To make the aid delivery system work better, an enlightened donor approach based on more demand-driven economic and technical assistance is required. An indigenous version of the “foundation model” could make development aid efforts more productive under the provincial devolution and localization of the Sustainable Development Goals. Nevertheless, the federal and provincial governments need to work on formulating policy frameworks under their respective development agendas and to build public sector capacity in a bid to make aid efforts more productive in Pakistan.

He will be presenting the research summarised in this post at the Australasian Aid Conference, 15-16 February 2017. Find out more and download the conference program here.