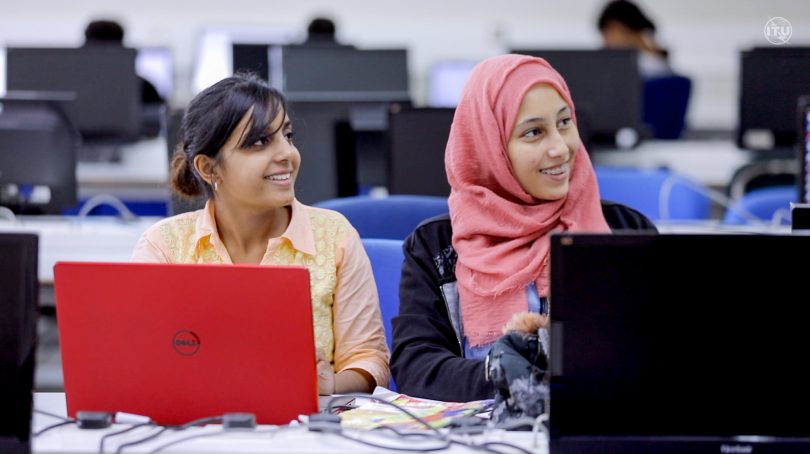 While it is common knowledge that the COVID-19 pandemic has reversed decades of progress on the Sustainable Development Goals, the backsliding on key areas had already begun prior to early 2020. In 2019, the United Nations reported negative trends in the following areas: “rising inequalities, climate change, biodiversity loss and increasing amounts of waste from human activity that are overwhelming capacities to process them.” For these trends, particularly increasing inequalities, it seems that the pandemic has entrenched them further, with specific concerns raised over rising gender inequality in the Global South.

Even prior to the pandemic, the gender and geographical disparity in the knowledge production sector was evident. The percentage of female researchers improved across all regions, except for Central and Eastern Europe, from 2014 to 2017 (Figure 1). The progress in regional averages also translates to a rise in the global percentage, from 28% to 30%, during this period. This is a win for female researchers worldwide. However, it is important to acknowledge that, for regions like East Asia and the Pacific, and South and West Asia, females account for only a quarter or less of all researchers at 2017. 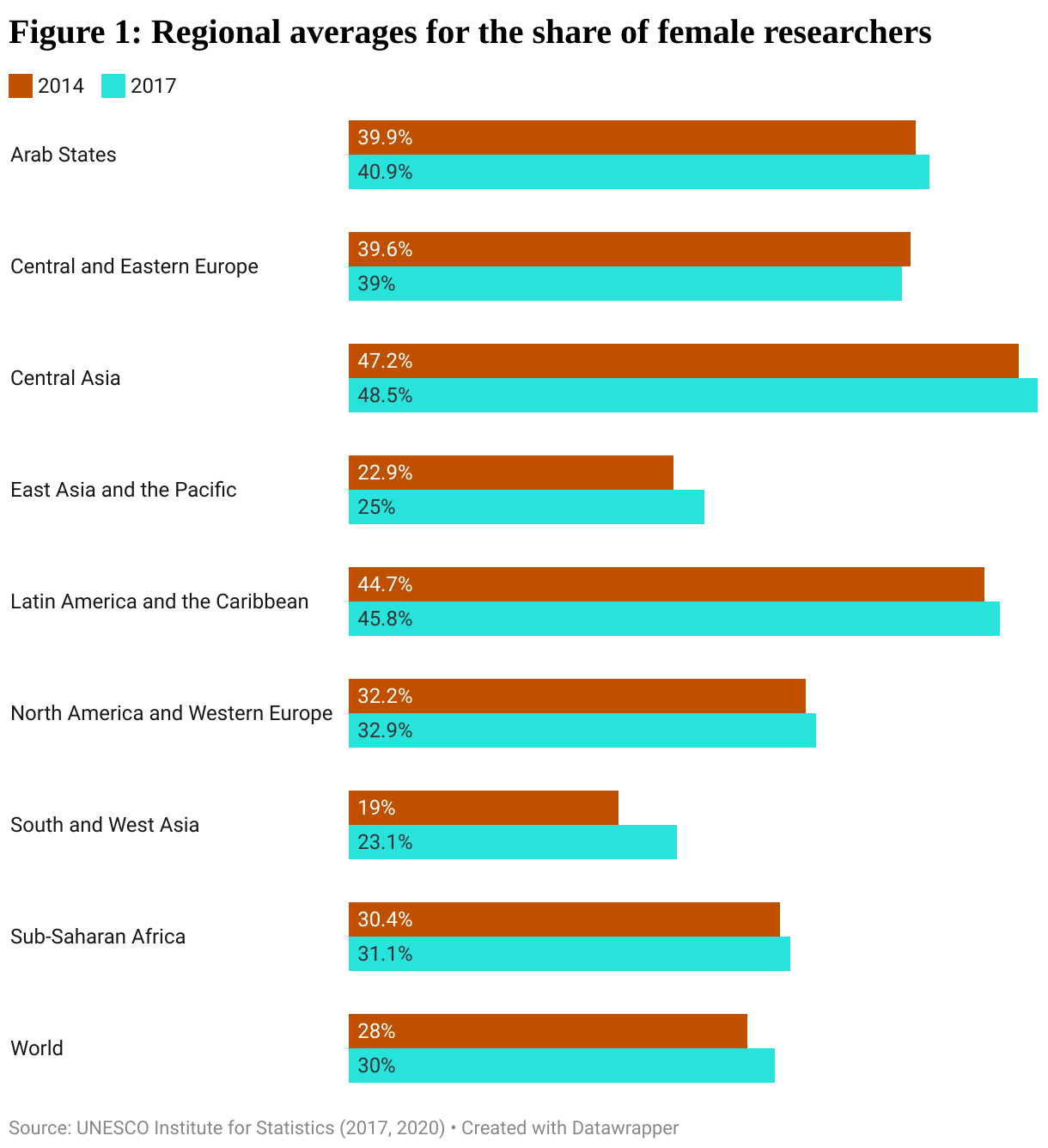 The rapid change in technological development, or 4IR (the Fourth Industrial Revolution), is another area of rising inequalities, leading to a widening technological and economic divide between both the Global North and the Global South, and men and women. The gender gap is particularly evident in science, technology, engineering and mathematics (STEM) and artificial intelligence (AI).

In South Korea in 2019, women accounted for only 21% of people working in STEM research and development. Similarly, in Australia, women accounted for less than 30% of the academic research workforce in STEM. Figure 2 shows the relationship between the female share of STEM occupations and the female share of STEM tertiary graduates in 2020. Research has demonstrated that gender norms and stereotypes contribute to inequities in tertiary education, particularly in STEM. 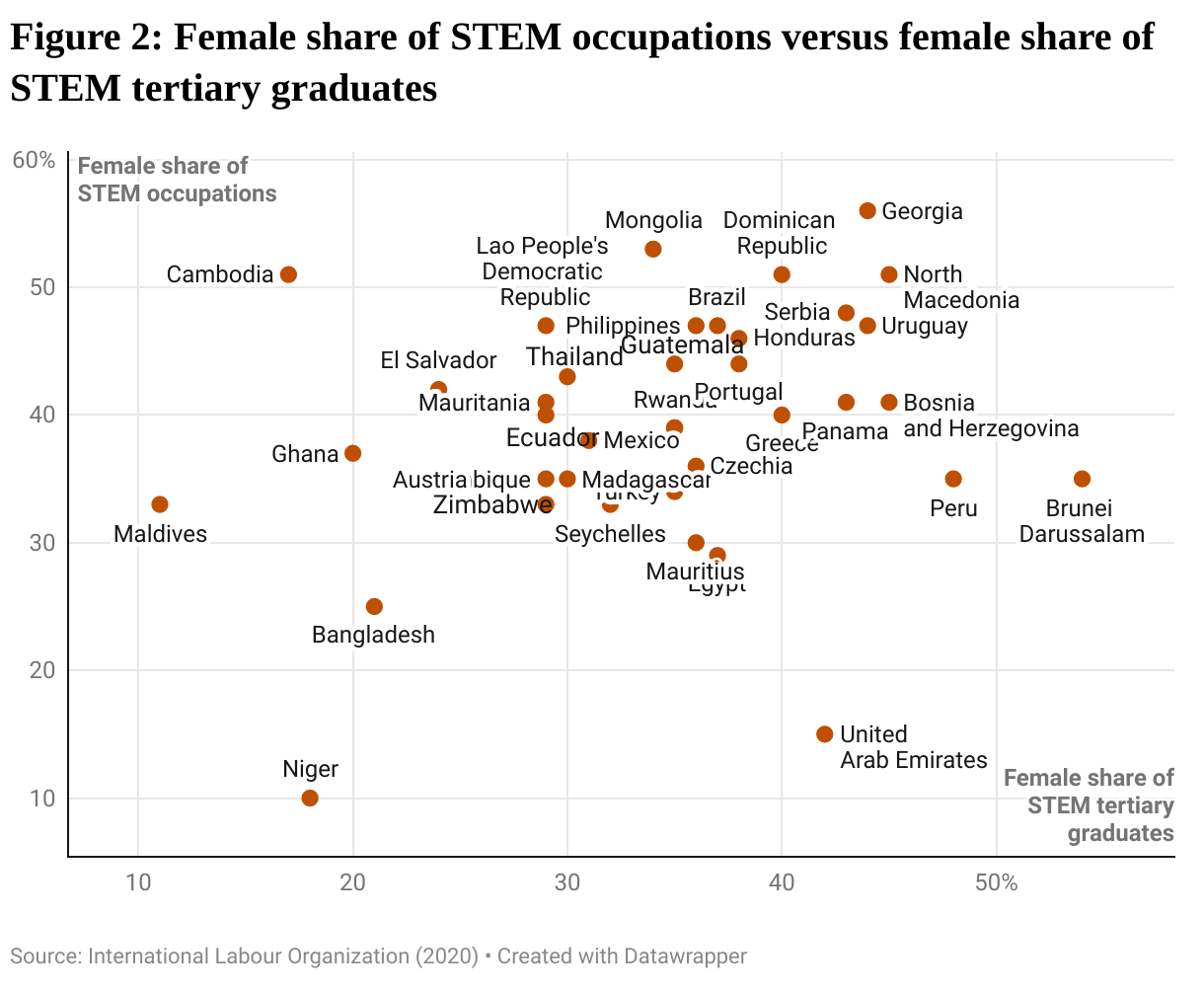 As women enter the workforce, they are also met with ‘glass ceilings’ and ‘sticky floors’, the latter being a phenomenon in which women and ethnic minorities are stuck in low-paying jobs with little to no possibility for lateral or vertical career moves. These career impediments also pervade the STEM field. It is evident that there are more deep-seated and systemic factors at play.

While the trends mentioned above preceded COVID-19, the pandemic has served to further embed them. In South Korea, 137,000 women lost their jobs in 2020 compared to 82,000 men, and married women were disproportionately affected. The Australian context is similar, with 8% of women having lost their jobs at the peak of the pandemic compared to 4% of men.

A dramatic rise in women’s care burden was noted in countries worldwide, including Bangladesh, Lao People’s Democratic Republic, Mongolia, Pakistan and Vietnam, where women have struggled to juggle caring and domestic work with employment and income-generating opportunities. In many cases, this has resulted in an erosion of their resilience, raising concerns over their ability to bounce back in the long term. In South Korea, a similar trend was observed, with over 56% of women reporting increased care work during the first half of 2020.

The pandemic has sharpened the focus on these systemic inequalities. As climate-related disasters increase in frequency, especially in the Global South, the world is likely to witness more shocks and crises in the future. With these impending threats, policymakers and institutions must rethink and reshape their approach to inequality in order to build more resilient societies.

First, the issue of gender inequality must be tackled throughout the life cycle by looking at the existing challenges that women face, including lack of access to services and education, unpaid care work, and uneven power relations between genders. COVID-19 has exacerbated these prevailing issues, and will continue to hamper women’s empowerment if not addressed immediately.

Second, an intersectional framework should be employed to understand how different identity markers, such as gender, race and class, overlap and impact different people’s ability to bounce back from disaster. This approach should be considered in all local and international policy decisions. In addition, greater investment in data and information infrastructures must be made to improve access to data disaggregated by age, sex and other identity markers.

Third, further investment in inclusive digital infrastructure is required, to allow people to participate more directly in policymaking, particularly those who are often excluded from these discussions.

Lastly, access to information and communication technology must also be improved, especially in areas with high concentrations of vulnerability and poverty, since women and girls, persons with disabilities, indigenous peoples, and other marginalised groups are most likely to feel the impacts of the digital divide.

If we adopt these approaches, we can move towards a more data-oriented, science-based, and people-driven recovery, and build resilience against future shocks and crises.

This blog is based on the first presentation given at the 2022 AAC Speaker Series, a new monthly online event co-hosted by the Development Policy Centre and The Asia Foundation. Watch Professor Eun Mee Kim present The Fourth Industrial Revolution, COVID-19, and women.

Niki Baroy is a Research Assistant at The Asia Foundation and a Social Researcher at the Western Sydney Regional Information and Research Service (WESTIR). Before starting her Master of Development Studies at the University of New South Wales, she served as a public-school teacher in her home country under Teach for the Philippines.