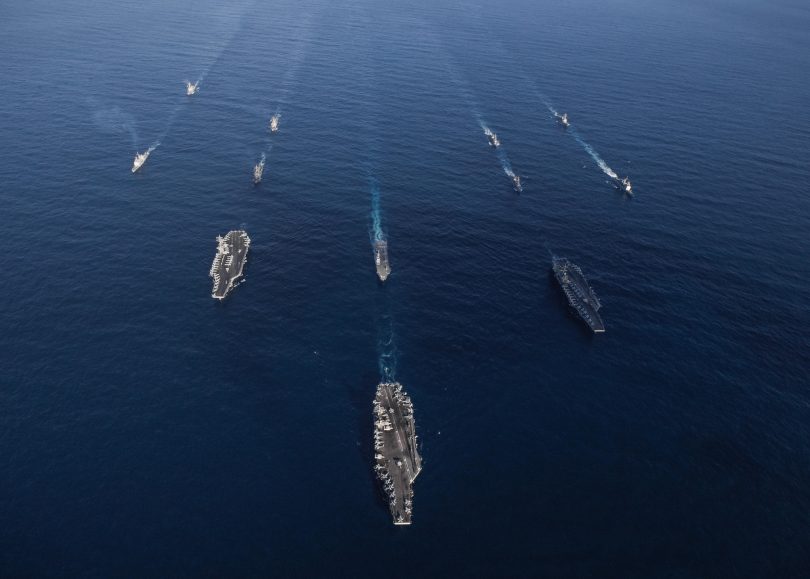 Ships from the US Navy and Japan Maritime Self-Defense Force in the Western Pacific (US Pacific Fleet/Flickr/CC BY-NC 2.0)

Recent months have seen an intensification of diplomatic activity in the Pacific Ocean, as traditional powers and new friends alike have redoubled their courtship of island administrations. Much of this activity has been driven by geostrategic anxieties, as the distribution of power in the world shifts.

Most pointedly, rapid economic growth in China has seen an expansion of that country’s power and influence, fueling speculation China will seek a greater say in regional and global affairs.  In response, traditional powers on the Pacific rim are looking to shore up commitment to the rules and norms of the existing international order. Competition between the United States and China (and dramatic points of contention, such as the dispute over territorial claims in the South China Sea) form a backdrop to renewed interest in the Pacific Ocean.

However it is far from certain that Pacific island countries share the same geostrategic anxieties, and diplomatic agendas, of traditional powers on the Pacific-rim. Indeed some island leaders are uncomfortable being ‘relegated to the status of pawns in a power play-off by larger states’.

Two distinct frames have emerged for considering the international affairs of the Pacific islands: the ‘Indo-Pacific’ (a geostrategic concept largely defined by Pacific-rim powers), and the ‘Blue Pacific’ (a collective diplomacy strategy adopted by island states themselves). These are considered in turn below.

US-led maritime security in the Indo-Pacific

Pacific island countries increasingly find themselves viewed by Pacific-rim powers as a sub-set of a broader region,  the Indo-Pacific. This framing – used particularly by strategic thinkers in Washington, Tokyo and Canberra – alludes to a recast role for maritime democracies in the Indian and Pacific Oceans; as states that will maintain balance in the regional order and reaffirm the ‘principles and values on which the regional order should be based’. As a sign of the times, the US military’s ‘Pacific Command’, based in Hawaii, has been re-named the ‘Indo-Pacific Command’.

Much of the recent diplomatic engagement with Pacific island countries is focused on security issues. At this year’s Pacific Islands Forum for example, leaders will consider a regional declaration to deal with ‘new and emerging security threats’. Canberra will establish a new Australia Pacific Security College to ‘complement’ this security declaration. The US has already indicated it will support the College. Australia has also launched a new $2 billion Pacific Maritime Security Program, which will see increased aerial surveillance in the Pacific Ocean, and 21 new military patrol boats donated to Pacific island states.

Security cooperation in the Pacific generally occurs in the broader context of US leadership. In June this year, US marines were embedded on Australian warships visiting island ports as part of operation ‘Indo-Pacific Endeavour 2018’. In the same month, a new ‘Pacific Security Cooperation Dialogue’ was held in Washington between officials from Australia, New Zealand and the United States. At ministerial consultations in Washington in July, both Australia and the US emphasised the importance of information sharing, maritime security and domain awareness in the Pacific islands.

Collective diplomacy of large ocean states in the Blue Pacific

Renewed maritime ‘awareness’ is important for Pacific island states too. In recent times they have repositioned themselves as large ocean states, rather than ‘small island states’. This re-framing is no ambit claim either. Fourteen independent Pacific island states are custodians of a huge swathe of the world’s ocean and have exclusive economic control of significant marine resources, notably the world’s largest tuna fishery. They also control access to seabed minerals that are sought after by many. Pacific islands also have interests and agendas that differ from neighbouring metropolitan powers. And they have agency.

Island leaders have endorsed a Blue Pacific strategy that calls for inspired leadership and a long term foreign policy commitment to act as one ‘Blue Continent’. Island nations have demonstrated they are prepared to leverage their collective oceanic presence – and UN votes – to shape multilateral initiatives that have implications for all of humanity. As former US President Barack Obama has pointed out, “we could not have gotten a Paris Agreement without the incredible efforts and hard work of the island nations”. Fiji is currently president of climate talks at the UN. Likewise, Pacific island countries are demanding action to protect the world’s oceans. In 2017 the inaugural UN Ocean Conference – held in New York – was co-hosted by Fiji and Sweden. Fijian ambassador Peter Thomson is currently the UN Special Envoy for the Ocean.

If traditional powers want Pacific islands to endorse their vision for a free and open Indo-Pacific they will need to take the concerns of island states seriously. Here a key challenge will continue to be climate policy. The US has withdrawn from the Paris climate treaty; Australia is the world’s largest coal exporter, and is planning to increase coal exports; Japan is promoting coal-fired power. These policies undercut shared efforts to limit global warming and ultimately threaten the physical security of Pacific island countries. A failure to seriously address climate change may prove an ongoing stumbling block to alignment between the Blue Pacific and any broader vision for the Indo-Pacific.

This blog is based on a recent working paper published by the School of Government, Development and International Affairs at the University of the South Pacific, and was first published by Griffith Asia Insights.