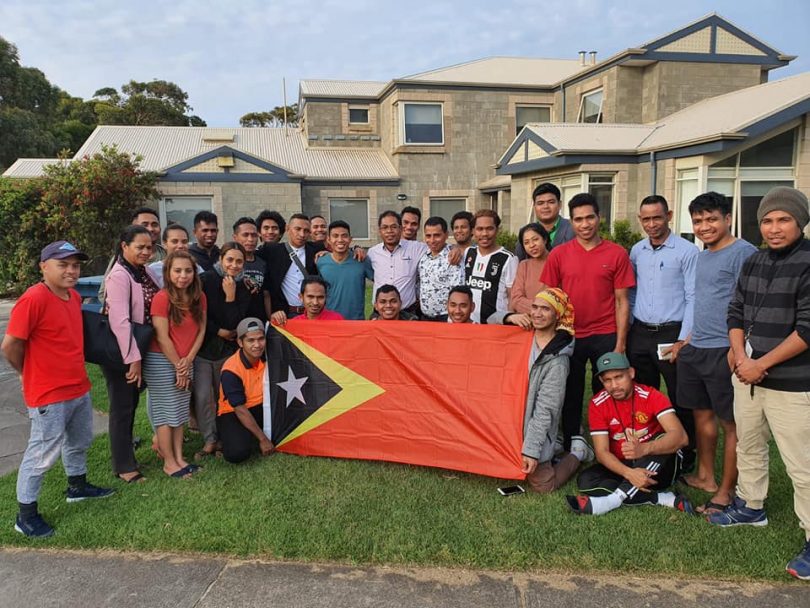 In the 90s, travelling from Melbourne to the family farm, grandad liked to break the journey at an orchard/warehouse called Dellios Apples. He saw it, I think, as a chance to acquire fruit and educate us pampered city kids as to where it came from. We could have anything we wanted, so long as it was apples, which we would select and have weighed by a pair of older men who would continue to chat to each other in Italian as they did so. ‘New Australians’, grandad would say as we hauled the fruit back to the car, though with a frisson of bemused irony. It had been decades since there was much new about any of them.

The term has fallen from use, but was current from the 1950s and reflected the spirit of that time, and the fifty-odd years that followed it, clearly enough. For all its highly problematic aspects (the most glaring one being that until 1975 was overtly racist) immigration then envisaged those who fled hard times in Europe, and later Southeast Asia, not as ‘guest workers’ but people whose agricultural skills and capacity for hard work were aspects of what they had to contribute to the future of the country.

Current policies focused on ameliorating regional labour shortages no longer embody this spirit, and it is worth taking a moment to reflect why this is.

One reason is that over the past two decades, migration has become a political football. While there are people around who may remember voting in elections not set to a backdrop of xenophobic dog-whistling, as I dolefully contemplate turning forty I’m not one of them.

This dog-whistling (ironically often the work of self-proclaimed advocates of rural and working-class Australia), although no doubt expedient for winning elections, distracts from a hard truth – regional Australia needs migrants now as much as it did in the past. Possibly more.

And yet at the same time as we acknowledge this through seeking to grow the Seasonal Worker Programme (SWP) and the Pacific Labour Scheme (PLS), we also have taken the permanent settlement of these workers off the table, instead sliding into a middle ground where workers and employers whose strong preference is stability and continuity are subject to an oft-lamented regimen of oversight by a swirl of government departments along with the uncertainties of regular and costly international travel.

I spent much of 2019 speaking to Timorese people involved in both the PLS and the SWP, and the differences between the perspectives of those within them are striking.

Those in Australia with the SWP are, by and large, focused on getting home. They very often have young children, a half-finished house, a kios in the hands of cousins and a mental calendar of which they eagerly tick off the days.

The PLS on the other hand is a completely different animal. It brings out people from nine Pacific island countries and Timor-Leste for up to three years to work in non-seasonal regional industries, after which there is (officially) no prospect of them being able to stay. There are around 700 of them so far, undertaking work within essential primary industries that Australians just don’t want to do – most notably in abattoirs slaughtering livestock and then processing their meat.

I’ve spent time with a cohort of PLS workers from Timor-Leste in Warrnambool over the past six months or so, and it’s been fascinating to watch them settle in. You can hear the slight Australian inflection creeping into their English. They have learned to cope with and give back the sometimes rough banter of a blue-collar workplace. They talk of buying cars and perhaps of eventually going back to uni. The zeitgeist within the community is that of settling here permanently. Like those in the SWP they often too have children, but they dream of seeing them grow up in Australia with all the advantages that entails.

‘Won’t you miss Timor?’, I would ask. In their language they regularly refer to it as the Rai Doben – the Beloved Land.

‘We can always go back and visit’, they would say.

Another aspect of my conversations with the Timorese of Warrnambool worth keeping in mind is how many of them mentioned that they had considered going to work in the United Kingdom but were glad they had been able to come to Australia instead. Of whatever practical import it may or may not be for them, our shared history and status as neighbours means something. It is a sentiment Australian policymakers would do well to keep in mind.

What we will have in PLS workers who make it through their first three years is a cohort of people who are ready to settle in Australia. They will have established roots and routines. They will have acquired much-needed skills. They will have demonstrated the fortitude to work in a way few others are willing to. As permanent residents and highly experienced workers they will command higher wages than they do under the PLS, but for any regional employer this will be offset by the ease of managing them as regular employees rather than as part of a tightly regulated government program. They are not, having settled and acquired skills that are suited to regional Australia, likely to ‘flee’ to the city. They will, however, bring new life to regional communities that are crying out for it.

There are plenty of things to feel uneasy about when it comes to Australia’s record on race and migration; however, the notion, seemingly out of fashion, that people coming to work in regional Australia might be able to make a life here rather than just service a gap in the labour market is not one of them. It is time for policymakers to take inspiration from this old idea and build a path to permanent residency into the PLS.