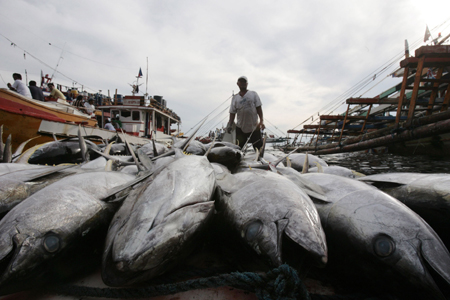 When I moved to the Pacific islands to work there in the early 1980s the majority of the island countries were still relatively newly independent. This was a time of guarded development enthusiasm. Backed by the donors of the day this was also a time of heavy government intervention in resource development. The country that I had come to work in, the Republic of Kiribati, had only been independent for 4 years and, quite typically for the time, the government and all major donors backed direct government investment in the tuna industry. While it was almost impossible in the 1980s to raise public finance for a cultural center or for historical preservation, there was no shortage of donor-backed finance for tuna vessels, cold stores, ice-making and refrigeration plants.

My personal involvement in this story began with working as an agriculture resource development economist for ten years prior to moving to the Pacific. I had already witnessed the many failures of government-led agricultural development in both the more developed and less developed countries. However, upon joining the Government of Kiribati, at that time as their only economist, I inherited a number of directorships including that of Te Mautari Ltd, the government owned tuna fishing company. After the completion of my contract with the Kiribati Government I returned to the country in the late 1980s to help evaluate the operations of both Te Mautari and Te Maiku, the tuna baitfish farm. So I continued to witness and struggle with the failures of state investment in resource development first hand.

In 1992 I joined the East-West Center in Hawaii as a Research Fellow where, in addition to my research, I was encouraged to continue my consultancy work. The latter included work on the Pacific tuna industry. Upon joining the ADB in 1996 I was asked to summarize the findings of some of my earlier work in the ADB publication “The Pacific’s Tuna: The Challenge of Investing in Growth”.  As this report concluded: “… the region’s rich tuna resource offers the potential for significant locally based industry. … [However], the major efforts thus far to establish this industry have been only minimally successful. Except for license fees, the region has received scarcely any benefit form the tuna industry.”

The ADB publication went on to identify two main constraints to the development of the Pacific tuna industry:

Based on my own personal experience there are many reasons why government tuna ventures failed. Wrong vessels, equipment, facilities and managers supplied by aid, highly unrealistic operating projections including inadequate working capital, and political intervention in management all played a part. Asked to name one reason or set of reasons, I’d have to say this lies in the very nature of government ownership and operation in the small, remote, and close-knit communities of the islands. An old commercial fisherman one told me that: “Governments have no business being in business, most especially in the fishing industry which carries the greatest of ‘high roller’ risks.” Managing these risks would be hard for any government. In the Pacific this is impossible. In the Pacific the reality is that the very real, very personal interests of individuals – their jobs, their families and their broader social relations – rather than commercial considerations dominate the decision making of government-owned enterprises.

The ADB publication recommended support for private-sector-led development of the tuna industry with island countries aiming to progressively exploit their comparative, locational advantages over the long-term, slowly building up the island-based on-shore supply and servicing of the tuna fleets. Some countries, and some with the help of the ADB, changed their tuna development policies and there have subsequently been successes with private-sector-led tuna industry development in the islands. Examples include the private tuna transshipment operations in Micronesia in the mid 1990s[1], the private fishing fleets in Fiji and tuna processing in PNG and the Republic of the Marshall Islands [pdf].

It should however be of grave concern that despite this history, some Pacific policy makers and policy advisors continue to look to their governments to take the lead in investing in the tuna industry. While most donors have long turned away from providing grants and loans to government owned and operated “commercial” tuna ventures, others including the EU and Japan, continue to fund the replacement of rural and outer island fisheries refrigeration schemes that have rarely turned a commercial profit. Forum Economic Ministers’ discussions at the 2009 FEMM also prompted the ADB to summarize and reproduce earlier findings and policy recommendations. Does the Pacific have to repeat yesterday’s resource development policy mistakes?

In this first of a series, Steve shares some of his personal development policy sojourns in the continuing interest of adopting better policies for a better future in the islands.The rest of the series is available here.

[1] These enterprises were comparatively short lived owing in part to some governments contradictory policies of supporting both direct foreign investment and subsidized domestic government operations.