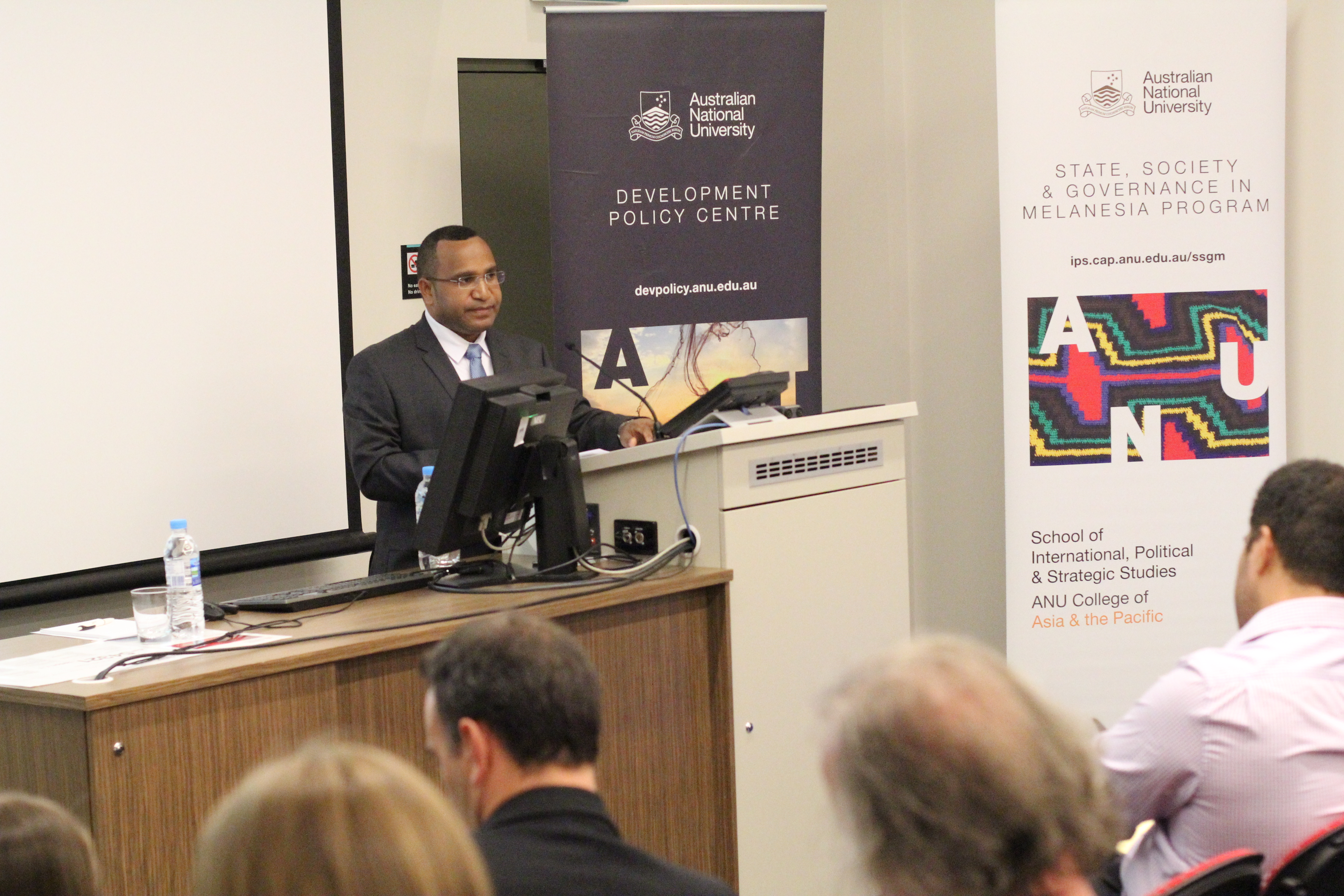 The head of Papua New Guinea’s anti-corruption coordinating body, Taskforce Sweep, Sam Koim, was recently in Canberra to present the challenges of fighting corruption in Papua New Guinea. You can read an edited version of his speech here and listen to the podcast here. In between appointments Koim was interviewed about his work, politics and corruption in PNG.

Perhaps the most alarming news about Taskforce Sweep is just how close it is to ceasing operations. After the Prime Minister, Peter O’Neill, ordered Taskforce Sweep be shut down earlier this year, the National Court placed a permanent stay order on this decision. We asked how the Taskforce was faring in light of this decision. Koim replied that the court order allowed them to continue to operate, but they are in a perilous position.  He said that:

The government hasn’t given us a single Toea [the country’s smallest unit of currency] this year… [To operate] we brought forward a little bit of funding from last year. And I have managed those funds up to now.

While the Taskforce has continued its investigations by operating on the smell of an oily rag, if more funding is not forthcoming Taskforce Sweep will close by the end of this year. Koim believes this will undermine anti-corruption efforts in the country.

Still, he hopes that even if it is shut down, the Taskforce’s legacy will live on. Koim argued that the successes of Taskforce Sweep have led to a reinvigoration of anti-corruption efforts in PNG:

We have created a momentum and other agencies are now beginning to rise up…more and more we see prominent people are being called into question [recently 15 politicians were placed under investigation for corruption related offences] or referred … if Taskforce Sweep is disbanded, all the cases that we’ve been working on will still be [investigated by other government agencies].

Koim has often been accused of political fealty. When Taskforce Sweep was first set up many commentators said he was O’Neill’s attack dog. After he coordinated efforts to arrest the Prime Minister early this year (which is still being argued over in the courts), O’Neill accused Koim of conspiring with opposition MP, Sam Basil.

Koim noted that the National Court vindicated his political neutrality: “the National Court stated that this allegation about the investigation being politically motivated [was not supported by] evidence”. For Koim, these accusations come with the job. “You can’t separate corruption from political issues,” he said. And when he talks about these accusations you get the sense that water has rushed off of the proverbial duck’s back.

But he also noted that in his position you need to be smart about dealing with politics and politicians:

From practical experience I’ve realised you have to manage politics. Politicians will come up to you and say we want…indictments to be handed down. Do it and we will give you money…we survived and gained the respect of the community because of how we managed all of that.

Aside from the political challenges, there are the personal. Security risks are “inseparable” from the job, Koim says. These risks have restricted his movement, and his family has also been affected. Yet he spoke of being buoyed by wide public support.

…security is not guaranteed. You have to take measures to look after yourself. So I don’t go to public places…I don’t get to walk on the streets that much. But when I get to go into a shop or on my way to the airport or wherever, people come up and say thank you. People are very appreciative.

For example, on a recent trip back to his home in Western Highlands, a simple visit to the market to buy fruit spontaneously turned into a public event.

The moment I entered the market, everybody started sobbing and crying. The entire market came to a standstill. A crowd of about a thousand people, they just ran from all corners trying to hold my hands. Mothers coming and crying and weeping and saying thank you. And they made me cry. I wept. I took a walk around. I couldn’t stay that long. I just went in and shook hands with everybody. The crowd followed onto the road. They disturbed the road traffic… they said you are not going until you give a speech.

Perhaps hinting at what motivates his work, Koim spoke of seeing the struggle his own mother faces in earning enough to live by selling produce in the markets. He said that while she and others like her may not be able to articulate the problem as one of corruption, they feel the pain from the rising cost of living and lack of earning opportunities.

The majority of the people who live in the villages and on the outskirts of Port Moresby, they are suffering. They’re not on Facebook. They don’t read newspapers. They don’t see TV…. [Yet] these are people who are crying out their hearts, the pain that they’re feeling. [They] don’t know what it is, what is causing it. But they’re actually feeling the pain of their inability to sustain [themselves].

Sam Koim is Chairman of the multi-agency, anti-corruption body Taskforce Sweep and Principal Legal Officer at the Department of Justice and Attorney General, Papua New Guinea. Grant Walton is a Research Fellow with the Development Policy Centre. Ashlee Betteridge is a Research Officer at the Centre.