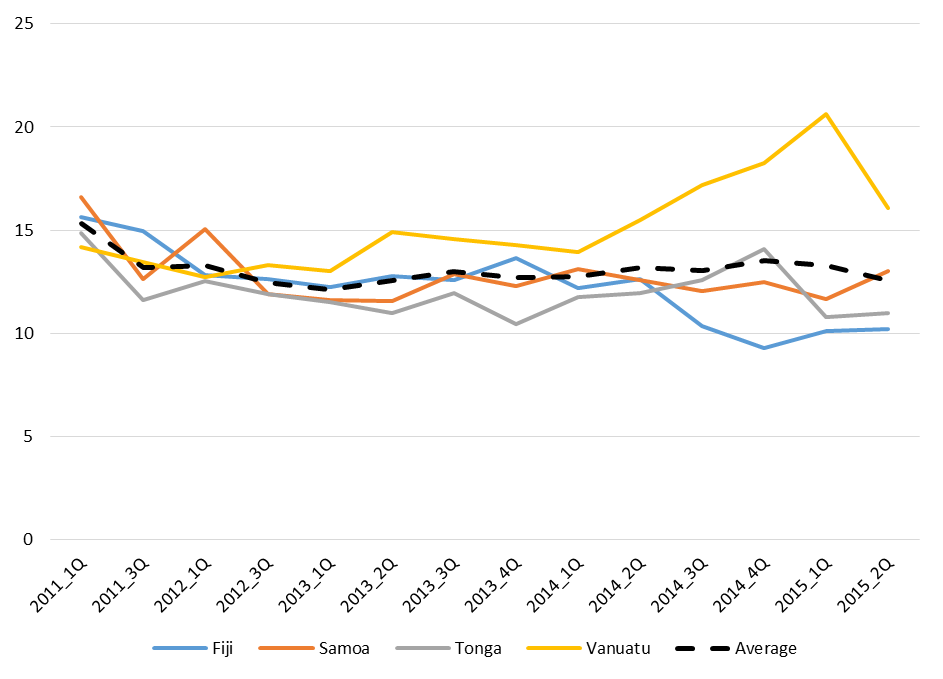 We know that labour mobility is key for development in the Pacific and already an important source of foreign exchange earnings and household income for some Pacific island countries. But for Pacific workers in Australia or New Zealand wishing to send money home, remittance transaction costs are among the highest in the world and there has been no success in recent years in bringing them down. The Australia-PNG corridor, in particular, stands out as one of the most expensive in the world.

Globally, the average cost of sending remittances is currently at 7.5% (based, by convention, on the cost of sending $200). The global average cost remains above the G20 target of 5% and way above the more demanding SDG target of just 3%. The cost of remitting from Australia to anywhere is comparatively high, at an average of 9.2%. The cost of sending remittances to the Pacific from either Australia or New Zealand is substantially higher again at 11.5%. Worryingly, whereas the global average cost of remitting has been falling, there has been no progress in reducing average costs in the Pacific for at least the last two years. There was some reduction in costs for sending $200 prior to 2012, but none since, and no progress at all since 2011 in reducing the costs of transacting a larger amount of $500.

The two charts below draw on the World Bank’s Remittances Prices Worldwide (RPW) database. The costs include both fees, and any difference between the exchange rate provided by the money transfer operator and the interbank exchange rate. 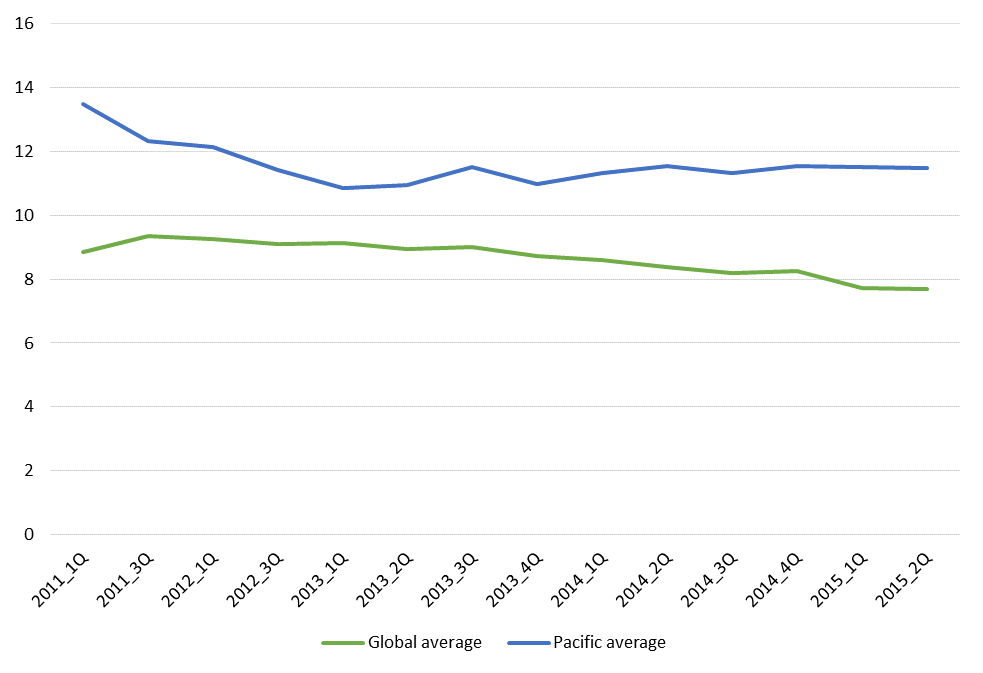 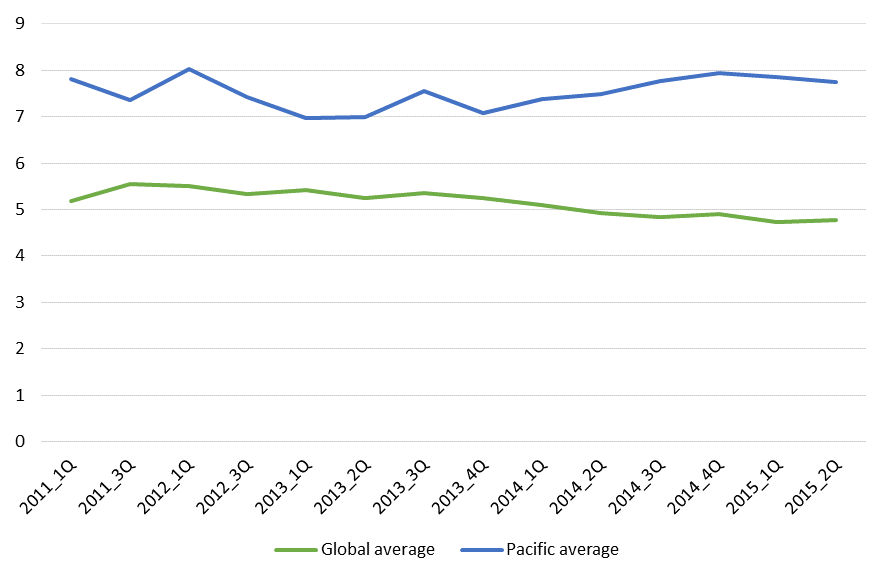 The cost of sending money is particularly high from Australia, as the chart below shows, via comparison with New Zealand.

Figure 3: Average percentage cost to send $200 or $500 to the Pacific from Australia or New Zealand 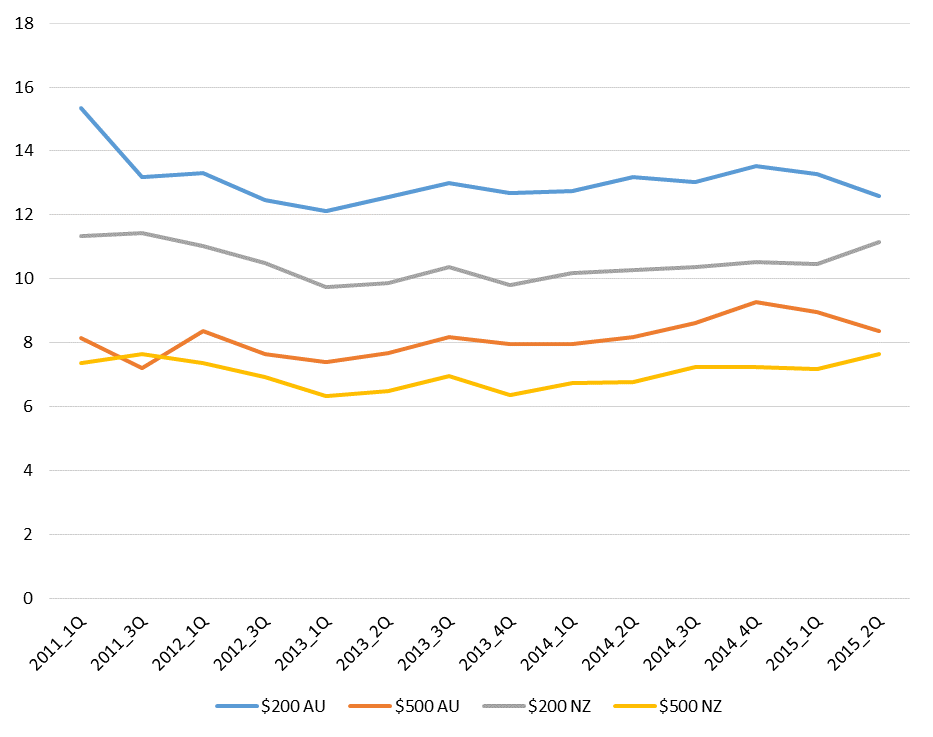 The RPW database contains quarterly information on transaction costs since 2011 for sending money to Tonga, Vanuatu, Fiji and Samoa from both Australia and New Zealand. This is the data used to calculate the “Pacific averages” shown in the charts above. The figure below shows costs separately for the four countries. Only Fiji’s costs have been on a consistently downward trend. Vanuatu seems to be trending up.

Indeed, if we take Fiji out, it becomes clear that costs have in recent years been stable or increasing for the other three Pacific countries.

Figure 5: Average percentage cost of sending $200 and $500 to Pacific island countries other than Fiji (Australia and NZ combined average) 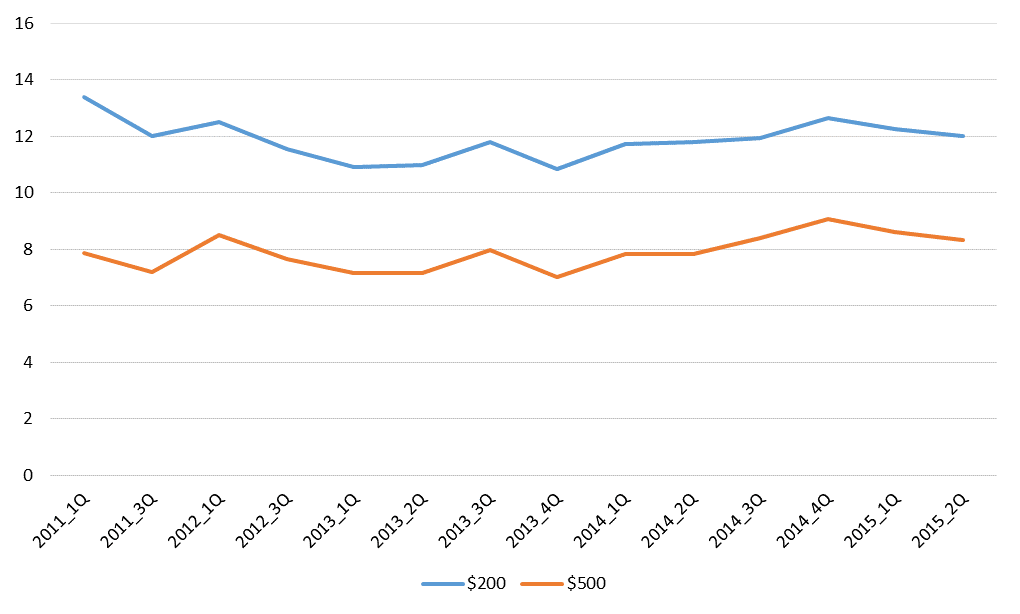 While the time series data is only available for four Pacific countries, data from 2011 is available for a larger number. The table below shows the average percentage cost across money transfer operators for the most recent period available for each country. Melanesian countries fare particularly poorly, possibly due to their lower numbers in Australia and New Zealand when compared to workers from Polynesia. PNG is the most expensive destination, followed by Solomon Islands and Vanuatu. If you want to send $200 home from Australia to PNG, it will cost you $40 just in fees!

Table 1: Cost of transferring money from Australia or New Zealand to Pacific island countries as a percentage of total transfer – latest available period

Reducing remittance costs has been a long-held objective of the Australian Government. In 2009, the Australian and NZ aid programs financed a new website, Send Money Pacific, which allows people to compare costs across sending options. Similar websites have been financed by other donors in other regions. In 2011, the then foreign minister Kevin Rudd announced a Commonwealth-wide initiative to reduce such costs, including in the Pacific. In the G20 context, the Australian Government highlights (Annex 1) a range of actions that it is taking to reduce the cost of remittances, especially in the Pacific. The government’s heavily advertised partnerships with ANZ and Westpac might also have been expected to involve some action on remittance costs. Clearly, these various measures aren’t working.

More research is needed to understand why. Worldwide, there are concerns that anti-money laundering policies are pushing up remittance costs. These same worries were expressed in the Pacific context at the recent Forum Economic Ministers Meeting in Cook Islands where Ministers “expressed with ongoing concern the increased costs associated with the wholesale closure of bank accounts of Money Transfer Operators (MTOs) and their Agents.”

But tighter anti-money laundering policies can’t on their own explain the widening gap between the cost of sending Pacific and worldwide remittances, nor why the former is stagnant, while the latter continues to decline.

Ashlee Betteridge is a Research Officer at the Development Policy Centre. Stephen Howes is Director of the Centre.

Notes: The RPW survey covers two amounts per corridor–the local currency equivalent of $200, and the local currency equivalent of $500. All dollars referred to are US dollars. Further details on the RPW database methodology are available here. The global average is calculated as the simple average of the total cost of remitting across all money transfer operators. The Pacific average (and the Pacific average excluding Fiji) has been calculated using the same method. Some Q3 2015 data is now available on the RPW website. The data is not complete enough to include in this post, but it suggests a significant drop in costs in transferring funds from New Zealand to Pacific island countries, but only a marginal drop in costs from Australia. As the figures in this post show, there is significant quarter-on-quarter volatility. A spreadsheet with the data used in the figures above is available here.