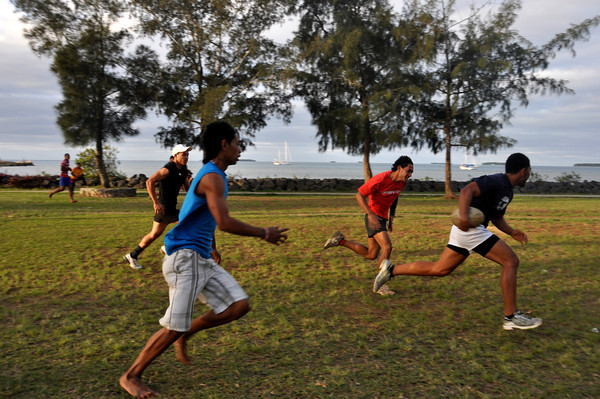 Writing for USAID’s yearbook, a veteran Tanzanian NGO leader argued [pdf], “Soccer and development … have several features in common”. Similarly, a London-based self-described ‘social purpose company’ assists development workers by explaining [pdf] that “The logic of football offers one way to understand the limitations of the logframe…”

The plugging of ‘the beautiful game’ as a useful metaphor for development projects began to receive global traction when Oxfam’s Duncan Green blogged in The Guardian’s Global Development Professionals Network last June: “Football teaches a useful lesson in becoming more adaptive”. We beg to differ. On the eve of the Rugby World Cup, we suggest that rugby union – the ‘beastly game played by gentlemen’ – is a much better metaphor as a source of wisdom.

The soccer analogy certainly works on some levels, although it also contains some problematic aspects. It does turn development into a contest, with a zero-sum singular outcome. In-country parties become opponents and obstacles almost by default. And as with the logframe, goals are few and far between and hard to achieve. There is also, it has to be said, something unsettling in drawing parallels between the billions living in poverty and with little voice and fewer rights, and the banal, ridiculously overhyped and overpaid ‘superstars’ of the massive commercial enterprise that is global soccer.

But leaving aside these concerns, and in the interest of distracting readers from the overhyped and all-consuming Rugby World Cup that is about to overwhelm us over the next two months, we would like to suggest that rugby union can speak to development much more than soccer.

In the spirit of this, we offer below entrées to seven aspects of rugby union that you can look out for over the next two months, that may provide new insights into the world of development (and which also mark rugby out as far more sophisticated than soccer).

1. Rugby union’s ‘set pieces’ – the scrum and the lineout – are very structured elements of the game from which carefully crafted pre-designed ‘plays’ are attempted. Often they fail, but when they do succeed, they are a thing of beauty. Some are short and sharp (Tony Woodcock’s winning try for the All Blacks in the 2011 World Cup final) and some much longer and flowing (such as Christian Cullen vs Australia in 2000), but they are all cases where plans are practiced, executed and succeed spectacularly.

In the world of development, such things happen too. There is perhaps a misplaced pessimism that engulfs us, blinding us to some of the successes out there. Planning is not dead, and sometimes it works well. And the set piece set up also harks back to the structured meetings around which so much of development is negotiated by donors and partners – either sitting in lines facing one another (the lineout), or working in groups (the scrum).

2. Rugby, though, is not all about the set piece. Unstructured play – dominated by the cut and thrust of tackles, rucks and mauls – is where some teams excel.

In development too, a lot of the excitement is generated in the unstructured encounters at coffee shops and bars, or meetings at airports. These are often the times when development outcomes are really shaped. Decoy moves, support plays, and even the occasional hospital pass are all part of these get-togethers.

3. In soccer, there is only one way to score points that add up to success. In contrast, rugby players win points by carrying the ball over the line (a try), but they also accumulate points through penalties, conversions, and drop goals. Not all actions produce the same number of points, but a team that seeks to score through much-hyped tries may still lose the game to an opponent who consistently beavers away, scoring more of the less-valued drop goals. Sometimes there is virtue in ‘winning ugly’ (just ask the English).

Likewise, success in development is not (or not only) achieved through ribbon-cutting at the opening of fanfared multi-million dollar investments, but also – or even more so – through a long series of hardly visible but very conscientious daily acts.

4. Being adaptive is critical. For the All Blacks, a strength is their ability to quickly turn defence into attack (‘the turnover ball’). This might just be what wins the Cup for the All Blacks this time around (they say hopefully…).

The capability to nimbly switch from one response to another, as circumstance chances or opportunity presents itself is also a marker of successful development agencies.

5. The punt. In rugby, when a team is struggling to make progress against a resolute defence, sometimes the best response is to kick the ball high over the defence and just hope the oval ball bounces favourably.

Likewise, in development interventions the launching of an unplanned and under-investigated activity – often at the end of a budget cycle with the remaining funds – may prove to be the catalyst for change that was hitherto elusive.

6. Some players are better than others – a colossus (think Jonah Lomu) enters the game and can change everything. Conversely, a mistake by a single player can cost a team of giants dearly.

In development work we have all been in awe of one colleague’s actions, or despondent at others. Agency can subvert the most rigorous of structures.

7. For all the influence of players, coaches, and supporters; at the end of the day, money and power matter (and here we are drawn back to the parallels with ‘the beautiful game’).

Of course, this speaks also to the unequal power relations that continue to pervade donor-recipient relations.

As with soccer, rugby isn’t a perfect analogy for development, but there are some parallels. So, as you watch the next two months unfold, you could ask yourself: what can the lessons of development tell us about success and failure on the rugby pitch?

Glenn Banks is an Associate Professor and Gerard Prinsen is a Senior Lecturer, both in the School of People, Environment and Planning at Massey University. They are both founding, and Steering Committee, members of NZADDs.

Glenn Banks is Professor and Head of School at the School of People, Environment and Planning at Massey University, New Zealand.

Gerard Prinsen is a Senior Lecturer at Massey University, concentrating on project management, aid policies, participatory research, and decentralised education and health services. Before coming to New Zealand in 2003, Gerard worked as manager, trainer or researcher for Dutch development agencies in several African countries, including an appointment as Dutch Honorary Consul in Mozambique. He is a founding and Steering Committee member of New Zealand Aid and Development Dialogues (NZADDs).