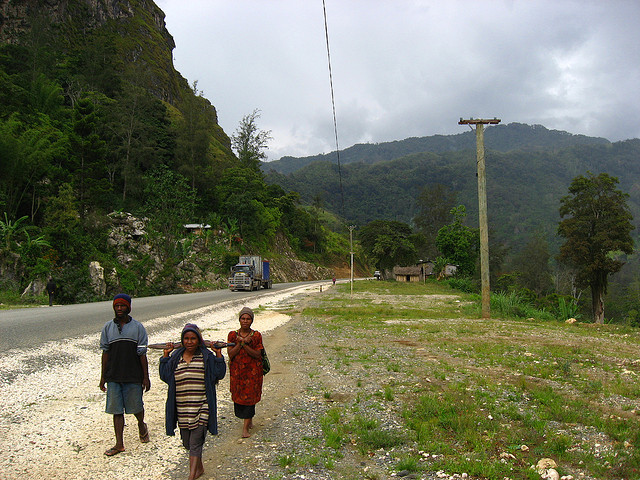 At a recent Australian National University workshop, a speaker claimed that China’s Export-Import (Exim) Bank had offered a 10 billion kina loan to Papua New Guinea (PNG), and that this had materialised in the form of a six billion kina loan to rebuild the Highlands Highway.

In 2012, I wrote an article, ‘The Six Billion Kina Question‘, wondering what was likely to come of this loan. The story of this loan — which three years later is still a chimera — is the subject of this post. The backstory reveals much about how infrastructure projects are developed in PNG and how Chinese aid is delivered in the Pacific. As PNG is now China’s largest trading partner (MOFCOM 19/2/2015) in the Pacific (overtaking the Marshall Islands in 2014), it also has relevance for the Australian companies that are in competition with Chinese contractors to win infrastructure projects in the Pacific. One Australian company had its own plan to rebuild and maintain the Highlands Highway; a proposal abandoned when the loan was announced.

The election and the loan

During the 2012 election campaign, Prime Minister Peter O’Neill and Minister for Works Francis Awesa did the rounds of media outlets, announcing that they had secured a 30-year, six billion kina loan from China Exim Bank to rebuild the Highlands Highway. In a Radio Australia interview, Awesa announced that during a visit to Beijing they had been told ‘any amount up to $US 10 billion we are more than happy to give’. The impression that the loan had been signed off at the highest level was reinforced in September when Peter O’Neill was photographed in China with Premier Li Keqiang and Zhu Hongjie, the vice president of China Exim Bank, who had led Exim’s 2006 visits to PNG and Fiji. But in this and subsequent interviews it was unclear why China would agree to hand over such a substantial sum, given that China’s 2006 loan facility to the entire Pacific was just US$492 million, and had only been slowly taken up.

After the election the PNG government continued to promote the loan, with Awesa promising on 28 September 2012 that it would be finalised within a month and funds would be available six months later. Suspiciously, the only reference to the loan in Chinese was translations of PNG press reports. Projects that were to be funded by the loan mushroomed to include a hydropower scheme, urbanisation in Port Moresby and Lae, and even the upgrading of PNG’s state-owned enterprises. China Railway International (CRI) wasted no time in announcing its success, with the website of the China International Contractors Association carrying news that an engineering, procurement and construction contract for phase one of the Lae–Nadzab Road had been signed on 25 September 2013. The value of the project was given as US$132 million, but the financing source was not identified (Yuan and Liu, 11/10/2013).

This promised six billion kina loan was superseded when US$1 billion in concessional loans for the South Pacific was announced by Vice Premier Wang Yang in November 2013, but it remains linked to two sections of the Highlands Highway: an upgrade of the Lae to Nadzab section by CRI,[1] and a 20 km road between Togoba and Kisenopoi Junction, built by China Machinery Engineering Corporation. To date, no Chinese funds have materialised, and CRI looks set to lose the contract for the Lae–Nadzab Road.

In attempting to trace the origin of the loan, it became apparent that the central ministries meant to oversee PNG’s development finance were in the dark. At the Department of National Planning and Monitoring, tasked with coordinating donors, officials offered that they did their best to guide loans, but ‘it just goes beyond us … China and Japan respond to politicians because of the absence of a clear aid policy. China prefers to work the way it does, they make agreements outside the normal process, and then after everything is agreed, they bring it to our budget process. Most of these projects are agreed at the higher levels — they approach the [Chinese] economic counsellor.[2] When the bosses say do that, we have to do it.’[3] At Treasury, tasked with managing PNG’s external debt, similar levels of bemusement were expressed. In PNG’s 2015 budget estimates the only documented use of a China Exim Bank loan for roads is 183.5 million kina for upgrading Port Moresby’s streets. Only PNG’s contribution to the Lae–Nadzab and Togoba–Kisenopoi roads is listed. While resigned to the fact that China Exim loans were tied to Chinese contractors, officials expressed concern that the bidding process for these projects was opaque. The size — and existence — of the loan is also unclear. As PNG Treasurer Don Polye explained, ‘I haven’t signed any loan contracts so I don’t know where all this information is coming from. The Treasury signs loans. I haven’t signed any.’ On the 800 million kina loan for the Lae–Nadzab road, Polye continued ‘[The] Works Minister will always say it, other ministers will always say it … Just because that’s how much you need, doesn’t mean that you’re going to get all this’. On 4 October 2013, Peter O’Neill directed Chief Secretary Sir Manasupe Zurenuoc to appoint an independent team to assess the pricing of these two road projects, which found that the cost of the Lae– Nadzab section was ‘unnecessarily high’.

In interviews with officials from the Department of Works and the Department of Transport, it became clear that these line ministries and Chinese companies were the driving force behind the ‘loan’. In May 2012, officials from the two departments met in Beijing with representatives of China Exim Bank (two Exim Bank employees are responsible for the entire Pacific region), but the bulk of the PNG officials’ time was spent with the companies. It is probable that the Chinese contractors, rather than China Exim Bank, put the 10 billion kina figure forward.

Chinese contractors influence China’s aid program in the Pacific, collaborating closely with local politicians or project brokers (not always local) to reverse engineer projects that are then presented to China’s development financial bodies and aid policymakers as local initiatives. The two projects related to the phantom (but timely, in electoral terms) loan demonstrate that well-organised government departments and entrepreneurial bureaucrats can also play a role. Both the Department of Works and the Department of Transport have been active in engaging with development partners: the Transport and Infrastructure Sector Monitoring Implementation Committee meets regularly and is the most effective donor coordination body in PNG. Given PNG’s vast infrastructure needs, evidence of bureaucratic initiative is welcome. But coupled with political pressures to get projects completed within a single electoral cycle, and the weaknesses of agencies charged with the oversight of development finance — particularly the Department of National Planning and Monitoring and the Central Supply and Tenders Board — PNG may find itself short-changed.

Graeme Smith is a F

ellow with the State, Society & Governance in Melanesia (SSGM) Program at ANU. This blog post was originally published as SSGM In Brief 2015/45.

[1] On the basis of an agreement of 30 September 2013, signed five days after CRI won the contract, much of the project will be undertaken by China Railway Eryuan Engineering Group, based in Sichuan. Such outsourcing is common, although rarely made explicit to the PNG side.

Graeme Smith is a fellow with the State, Society & Governance in Melanesia (SSGM) program at ANU.