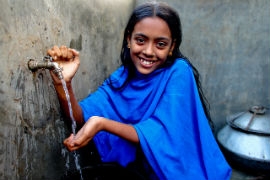 Tomorrow will see the best chance world leaders have to make the big push needed to meet the MDG target on sanitation and save millions of lives.

On 20th April 2012, ministers from around the world will meet in Washington DC to discuss how to address the crisis in safe water supply, sanitation and hygiene (WASH).  The importance of this initiative cannot be underestimated.

This will be the second High Level Meeting of the Sanitation and Water for All (SWA) partnership. Launched in 2010, SWA brings together developing country governments, donors and civil society organisations committed to accelerating progress towards universal access to WASH; through increased and more effective investment. If the SWA achieves its long term vision of providing water and sanitation to those currently unserved, the lives of the 2.5 million people who die every year as a result, would be saved.

The good news [pdf] we celebrated last month on World Water Day was that the global Millennium Development Goal (MDG) water target (to reduce by half the proportion of people living without safe water by 2015) has now been met. Whilst the new UN figures may be an over estimate, there is no doubt that tremendous progress has been made on drinking water since 1990. But the poorest countries and communities are being left far behind and many countries in Sub-Saharan Africa, Southern Asia and the Pacific remain off-track.

However, it is the slow rate of progress on sanitation that should be the single greatest cause for concern, because of the brake it puts on progress, especially in public and child health. A new report released this week found that eighteen African countries lose around US$5.5 billion every year due to poor sanitation, with annual economic losses between 1 percent and 2.5 percent of GDP. Promotion of sanitation and hygiene is among the most cost-effective of all public health interventions and as such it is imperative that we invest now for the benefit of future generations.

At current rates of progress the sanitation MDG target (to reduce by half the proportion of people living without access to an improved toilet by 2015) will be missed by a huge margin. There are more people in the world today without sanitation than there were in 1990. The majority of developing countries are seriously off-track and, unless urgent action is taken now, Sub-Saharan Africa will not meet the target for over 150 years. This lack of basic facilities to hygienically dispose of human faeces is the primary cause of diarrhoeal diseases, which kill thousands of children around the world every single day.

But this need not be the case. The 2012 SWA High Level Meeting is specifically calling on world leaders to keep their promises and to support the 57 countries currently most off-track to achieve their MDG targets for sanitation. WaterAid estimates that if these countries achieve their MDG targets for sanitation by 2015, at least 400,000 additional children’s lives would be saved [pdf].

The 2012 High Level Meeting is a critical milestone in efforts to accelerate progress towards the ultimate goal of sanitation and water for all. Across the world, countless people are working to solve the WASH crisis, but leadership and political priorities matter. Politicians, both in developing and donor countries, hold the key to kick-starting a response. Only they can push for investment at the highest level, and more importantly push for it to be spent where it is needed most. We expect there will be more than 25 developing country Finance Ministers and over 50 WASH sector ministers along with their donor counterparts, including Australia, at the HLM. These are the high level decision makers that can take the action to address this crisis.

That is why the High Level Meeting is so important. It is about agreeing the coordinated action that needs to happen in order to increase and improve investment in WASH and to strengthen accountability for results achieved on the ground. Each country will bring a report on progress against commitments made at the previous High Level Meeting and a new set of commitments, as in the case of Timor Leste. This process of following up ensures that commitments are turned into actions.

If the purpose of the High Level Meeting is all about increasing the political and financial priority accorded to water and sanitation, then the Australian Government has a good story to tell on Friday.  Australia’s actions in recent years show just how this can be done. Australia’s story combines prioritising saving lives through improving access to safe water and sanitation its aid policy, preparing guidance on how to direct WASH investment through a new thematic sectoral strategy, increasing allocations to the sector and investing in activities to build capacity to effectively use these resources.

The path forward is clear – the SWA High Level Meeting can and must deliver clear political commitment to get back on track for sanitation and to accelerate progress towards sanitation and water for all. We will be posting regular updates from the HLM here and will post a blog in the coming weeks with our analysis of the commitments made and the outcomes from the meeting.