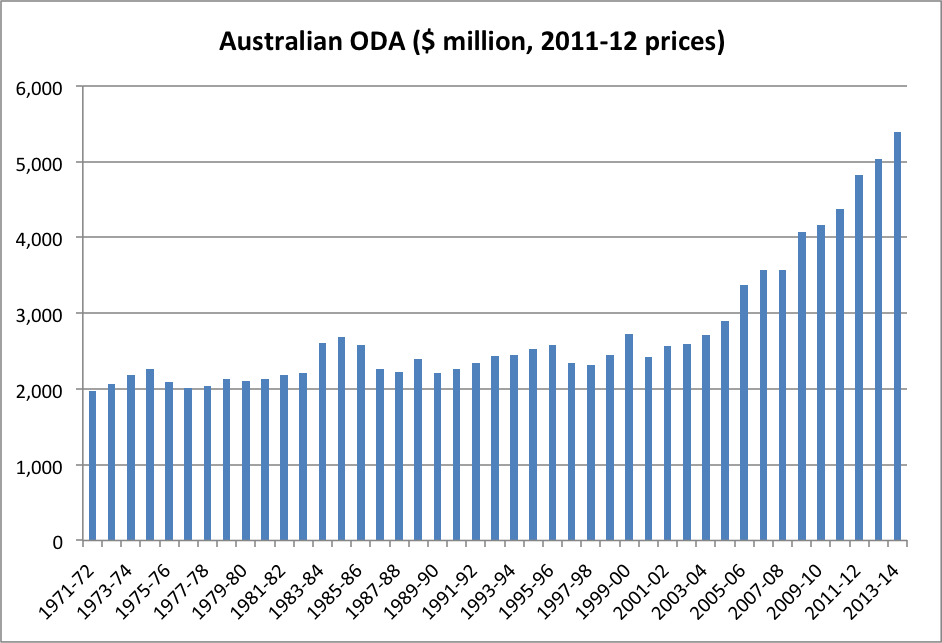 In my blog post which came out on Monday morning, I argued that either the Government would have to increase aid by $500 million, which would be the third largest increase in aid ever, or the aid community would be disappointed for the third time in a row. The first disappointment came in the last budget, when aid was only given a modest increase and the objective of increasing aid to 0.5% of Gross National Income (GNI) was deferred by a year from 2015 to 2016. The second time was last December when the Government took $375 million from AusAID to pay for costs related to asylum-seekers in Australia.

Not long after that post came out, Foreign Minister Carr announced a $500 million increase to lift the aid/GNI ratio to 0.37% in 2013-14 up from 0.35% currently, as promised in last year’s budget. The response of the aid community has nevertheless been overwhelmingly negative because of two other things Mr Carr said. First, he again deferred the aid/GNI target by another year to 2017. And he announced that the Government would again be using $375 million from the aid program in support of asylum speakers.

So, I was wrong. We had the third largest increase ever, but the aid community was still disappointed. Why? That’s what I discussed at my presentation at the aid budget breakfast we held this morning. You can find my slides here.

Given that some commentators had predicted that the sector was heading for a fiscal cliff, that $500 million is a significant gain. It’s also worth taking a historical perspective. Go back 10 years, and you’ll find that, even after accounting for inflation, the aid program was only $2.7 billion (in 2011-12 prices; $2.0 billion in current prices). Today it is double that at $5.4 billion (again in 2011-12 prices; $5.7 billion in current prices). That’s an impressive bipartisan achievement of which we should all be proud.

It is certainly an achievement which has transformed our international standing. Traditionally, we have not been a generous donor (as measured by our aid/GNI ratio), but now we are about as generous as the typical OECD donor, which is progress. And, because of the growth of our economy, the strength of our dollar, and that increasing generosity, we have become an important donor: we were only the 15th most important OECD donor 10 years ago, last year we were the 8th, and this year we might become the 6th most important. We’ll still be well outside the top five (the US, UK, Japan, Germany and France), but whereas our budget continues to increase, both Canada and Netherlands (which have been 6th and 7th) are cutting.

So what about the two negatives, the deferral of the 0.5% and the continued asylum-seeker diversion?  In my presentation, I argued that the 0.5% target was not credible, and showed that the Government has been pushing back the scale-up of aid not just for the last two years, but in fact since 2008. Five of the last six budgets have seen a delay in the scale-up. The resulting back-end loading has led to a situation in which, even with a delay, the 0.5% target can only be achieved by a series of implausibly massive aid increases, of close to a billion dollars annually for several years. From this point of view, the deferral of the 0.5% target is not an aid-quantity issue (since it wouldn’t have been achieved anyway), but an aid quality one since absence of funding clarity undermines aid effectiveness.

What about the continued use of aid to support asylum seekers? This has been extensively debated. The budget puts a cap on support for asylum seekers at $375 million, which is welcome from the point of view of predictability. Whether this sort of support should be counted as aid depends on the use of those funds, on which the Government has so far said very little. The budget does say that the asylum seeker funding will be used for “accommodation, food, clothing, and other basic necessities,” but whether, as the DIAC Secretary earlier suggested, this means it will help fund the detention network is unclear, and is a fundamental issue which requires clarification. More generally, an issue this important can’t be satisfactorily resolved by a one paragraph statement. More detail is surely needed, and eagerly awaited.

Overall, my summary take on the 2013-14 aid budget is the opposite to my assessment of last year’s budget. This one is strong in relation to quantity, but not quality. It increases aid by a significant amount, but doesn’t resolve the uncertainty concerning future aid funding or go far enough to clarify the rules around the funding of asylum seekers. With these issues lurking in the background, it is not surprising that the Government’s achievements in relation to aid are overshadowed by reactions of disappointment.

Whichever government is elected in September will face the important task of rebuilding consensus around aid, along a trajectory which not only is consistent with increasing generosity, but also is credible and has political buy-in.

The targets in this aid budget for the next two years to get aid to 0.39% of GNI and then 0.41% not only have greater immediacy than the 2017 0.5% target, but are also more realistic and doable. They might perhaps serve as useful benchmarks around which some new confidence in and support for a growing aid budget can be built.

There is much more to be said about the Australian aid budget. My colleagues Matt Dornan and Tony Swan have written about country allocations and the macro economic context respectively, here and here. ACFID has released a detailed brief [pdf]. And videos, presentations and more blogs from our budget breakfast today will be available shortly.