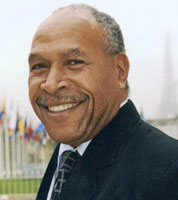 National Research Institute Director Thomas Webster was in Canberra earlier in this month. Here he answers questions put to him by Stephen Howes on a range of issues facing PNG.

Stephen Howes: You’ve just come down to Canberra from the Australia PNG Business Council conference in Brisbane. What was the mood like at that conference?

Thomas Webster: The issue that got the most attention was visas. It is a strain to doing business within the two countries. And it was an issue that was on a lot of speakers’ radars. The deputy Australia opposition leader as well as a number on the PNG government and also the President of the Business Council raised it.

The visa issue came forward in a striking way when the General Managing Director of the IPI Group said that he wanted to take some of the shareholders down for the annual general meeting and he couldn’t get the visas for them to meet in Australia, so they met in Singapore. I think you can see the level of frustration that is there.

Stephen Howes: Talking about the private sector, perhaps you can tell us a bit about the very interesting research you just published on the Porgera Gold Mine.

Thomas Webster: Well the Porgera study is something that came off a visit I paid to the Porgera Mine Site in 2009. I saw that the local primary schools were closed. The high school was closed. I was quite concerned.

I heard, the community saying, oh we need the services from the mine. We’re not benefitting from the mine. But when I talked to the mine management, they kept saying, we’re providing financial grants to different government entities to provide these different services – education, health, road, infrastructure, police, and so on.

In terms of the landowners, there are different financial benefit streams to different landowner groups and to entities. It was difficult getting data from those and trying to understand. From Barrick it was clear their payments were made, but what was being  done with those funds and who had responsibility for them and what it was spent on was very unclear.

Stephen Howes: So is your sense that communities are not benefitting from these arrangements?

Stephen Howes:  Even from the landowner agreements?

In terms of the landowner entities, there is no report from the management resource trust MRDC back to the landowners in terms of how their funds are doing.

In terms of landowner groups, the mine pays particular individuals or landowner groups, but these accounts are managed by – I don’t know how they do it, but it’s one or two principal landowners, and then from quiet conversations, they said that these individuals are living in Port Moresby or in Australia.

People on the ground in Porgera, young men and women and children, depend on the company paying them. There are some payments that they get every fortnight and they just live off that. But they don’t realize that there are some other benefits that have been paid, or financial benefit streams that they’re not benefitting from. And they still think that the mine owes them more monies, without realizing that a lot of that has been paid to them through different institutions but they’re not benefiting from that.

Stephen Howes: It’s fascinating research. PNG has elections coming up. What do you think are the big issues coming up that are going to face the people as they go to the polls?

Thomas Webster: Well the big issue is which political party will come back with the sound policies that will help to manage the economy going into the future. With the LNG gas project and expected proceeds of about two billion kina a year beginning around 2014 or so, it’s how the government will set the framework within which they will manage the financial benefits coming off the back of this gas project and other resource projects that are in the pipeline.

Obviously it’s important to elect a good government that will pump money into education, health, and roads and infrastructure, so that services that ensure the quality of living is improved. We know from all different reports that we are on the lowest end of the human development index in global terms.

Stephen Howes: What about the elections itself? Are you worried about possible problems with the conduct of the elections?

How it’s conducted, if it’s a safe and secure environment for one person, one vote, I’m not sure whether we’ll achieve that, but we’ll see what happens. But I’m confident that the elections will be held and we’ll have a parliament sitting in August.

Stephen Howes: You mentioned the two billion Kina a year that’s going to come from the LNG project. This would be a good time for you to say something about the research project we are embarking on together. After all, it was your idea. What was your thinking?

Thomas Webster: The National Research Institute had been working on anti-corruption policy and saying we need to adopt a relevant anti-corruption policy mechanisms in order to prevent abuse of public funds, but we didn’t seem to be getting anywhere. And I think we also didn’t quite understand how abuses are conducted in the public sector in terms of misuse of public funds.

So I thought it would be good to see where the leakages are and how they occur and that would give us an idea of the policy interventions that are needed in terms of making sure that funds are spent well.

This year we have a 10B kina budget. Last year we had about an 8B kina budget. The previous year about 7B. We spent all that money. But many people say, what was it spent on? We still haven’t got drugs in the hospitals. Our schools are falling apart. We have roads and infrastructure that are falling apart. We need to make sure that the money is spent where it should be spent.

Thomas Webster is the Director of the National Research Institute in Papua New Guinea. Note that the interview was before the most recent PNG Supreme Court ruling.