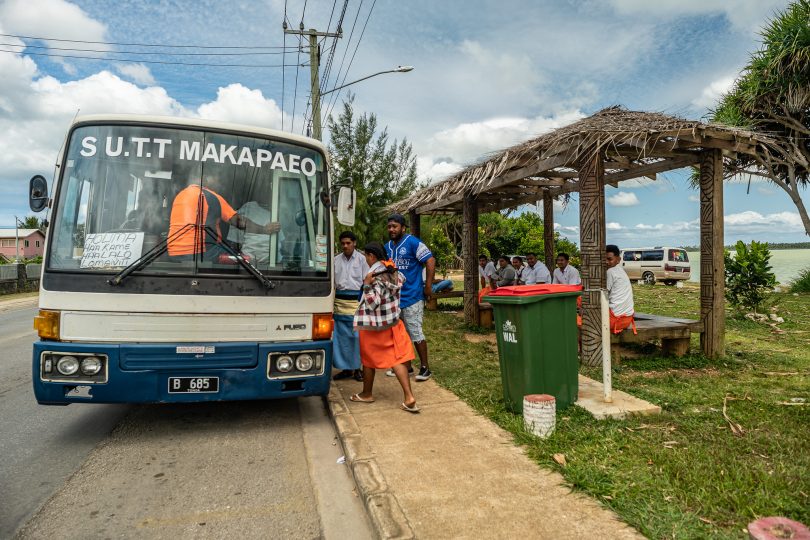 The Pacific Labour Mobility Survey (PLMS) covers households in three Pacific countries – Tonga, Kiribati and Vanuatu – and workers in Australia’s Seasonal Worker Program (SWP) and Pacific Labour Scheme (PLS; together now PALM) and New Zealand’s Recognised Seasonal Employer (RSE) scheme from those countries, to better understand labour, welfare, and other economic and social outcomes, and scheme impacts over time. This blog uses data from the recently completed Tongan household survey to answer some fundamental questions about the remittances that these schemes generate. 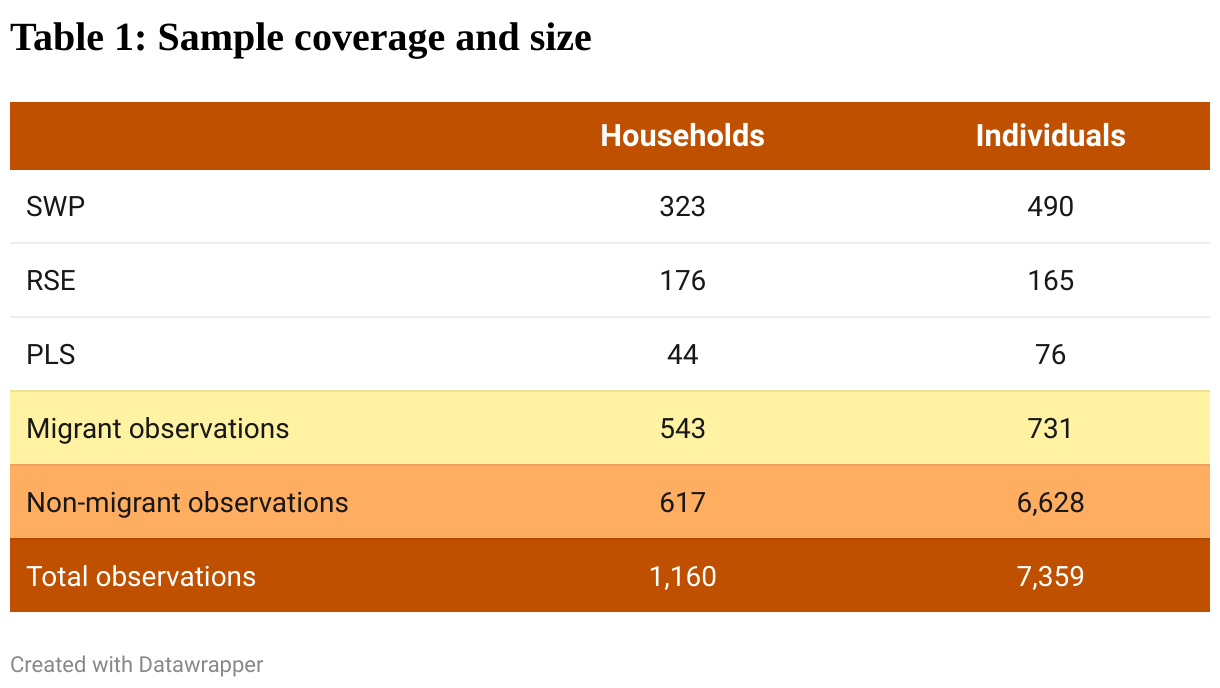 Who receives remittances and from whom?

How much do people receive?

We use the individual-level data – which identifies household members abroad in the three labour mobility schemes – to understand how much is typically sent back by workers. For the 731 household members reported to be in the PALM or RSE schemes, the mean remittances sent home in approximately the last six months of 2021 was 5,892 Tongan Pa’anga (TOP), equivalent to AUD3,684 or NZD4,065. Note that this is reported by the households receiving the money, and the average excludes individuals not reported to send money home. The median amount for the same group is TOP4,000. For the 79 workers who send goods (rather than or in addition to cash), the mean and median values are TOP1,515 and TOP700.

Table 2 compares remittances across schemes. Remittances from the SWP are highest. Other data in our survey point to simple explanations for this: longer hours compared to the PLS (which tends to be a more standard 40-hour work week and does not offer piece rates), and higher wages in Australia than New Zealand. In particular, for the SWP workers, earnings and remittances typically increase with hours worked, and many workers are reported (by their household back in Tonga) to work more than 40-hour weeks.

RSE and SWP workers typically send more money home in remittances alone than they would earn working back in Tonga. PLS workers send approximately the same. Our preliminary estimates (based on worker earnings reported by the recipient households) suggest that workers are sending around one-third of their earnings home as cash remittances. 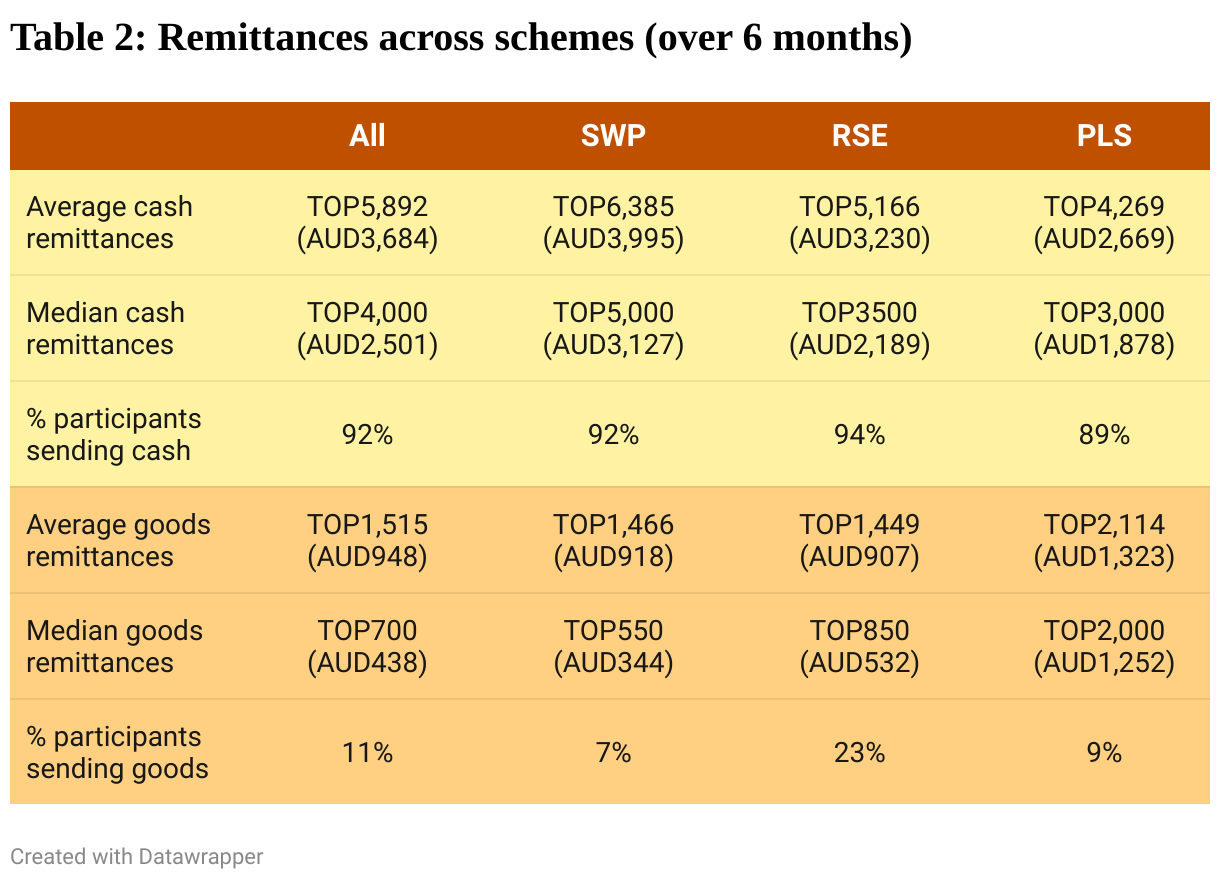 It is interesting to contrast these numbers against those from a similar 2016 survey. There, Tongan workers earned AUD19,942 (net of taxes) in six months but remitted just AUD1,459 to household members. AUD924 was sent to non-household members and AUD8,087 saved, mostly to take home at the end (see Table 5.3 of the report).

Our new remittance figures are much larger. Four explanations come to mind. First, data discussed here are reported by households, not individual workers. We will get the latter from the worker survey component of the PLMS currently underway. Second, short-stay agricultural workers often take cash home, but with travel restrictions, visa extensions, and the longer stay of the PLS, workers likely have shifted to sending earnings as remittances instead of bringing it home themselves. Third, earnings and savings may have changed. Fourth, perhaps remittances are now a little cheaper, or people are more comfortable sending them.

The main channel for sending remittances is by over-the-counter transfers through money transfer operators (MTOs), used by 48% of households. A further 34% use online MTOs, typically the same companies. MoneyGram and Western Union are the most common MTOs, used by 47% and 28% of households.

What are remittances used for?

The survey also asked households whether they use remittances for any of 12 categories of spending. The most common use was paying everyday expenses (four-fifths of respondents reported this use; see Table 3). Donating to church (over a third of respondents) and education expenses (a quarter of respondents) were the next most common uses. These patterns are similar across schemes, for households receiving remittances from people not in these three schemes, and to those in a recent World Bank report.

We don’t find much support for the traditional idea that remittances are some special windfall income. Rather, they mostly support basic consumption, like any other type of income. As Michael Clemens and Timothy Ogden explain, migration is – among other things – an important strategy for household financial management: location is an asset, and remittances a return on it. 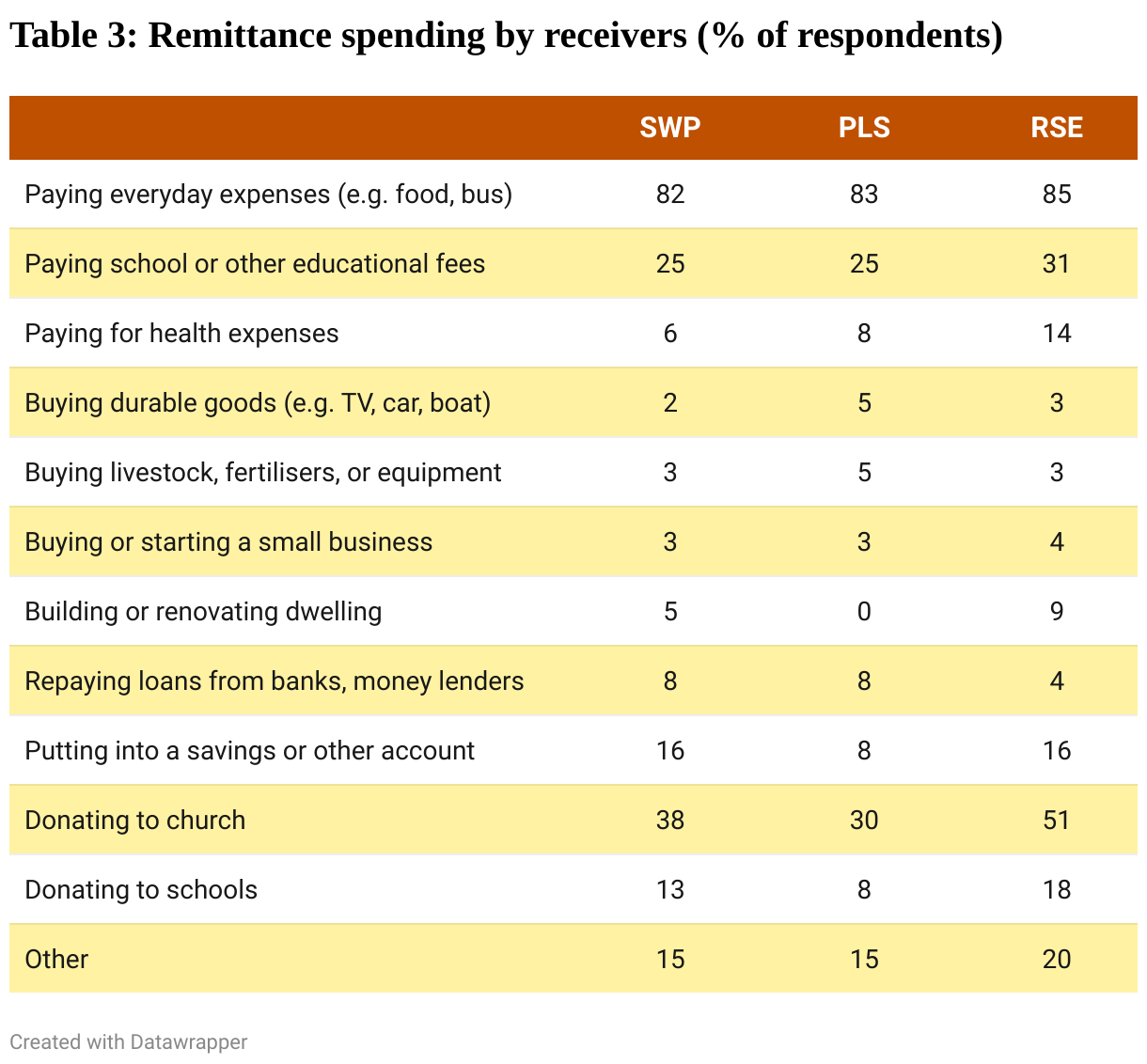 Dung Doan is an Economist in the World Bank’s Social Protection and Jobs team, focusing on jobs and labour market issues in the Pacific region.