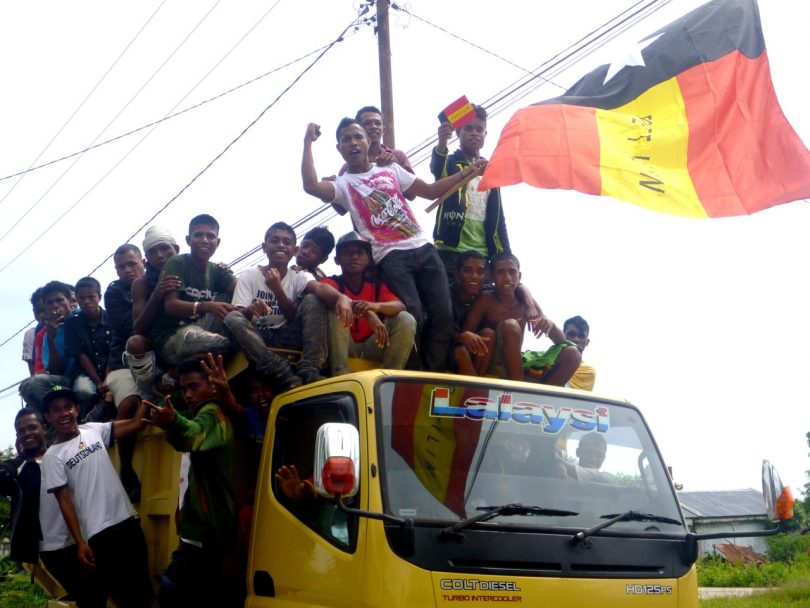 Youth getting energised for an election rally in East Timor (Kate Dixon/Flickr/CC BY 2.0)

Francisco Guterres, the current President of Timor-Leste, recently dissolved the national parliament and has called for a fresh parliamentary election in 2018. This was declared on January 26th, only six months after our northern neighbour had what was arguably their most successful parliamentary election cycle in history. How did these turn of events happen, and how is this going to impact the growing youth bulge of this already struggling nation?

On top of these elections, other feats included the first LGBTQI+ pride march through the nation’s capital, Dili. The vocal support for Timor-Leste to become a member of ASEAN also became a heightened priority for the nation. August saw the launch of Kim McGrath’s explosive book Crossing the Line: Australia’s Secret History in the Timor Sea, an excellent exposé detailing Australia’s duplicitous behaviour around negotiations regarding its interests in the Timor Sea. Coincidentally, several weeks after the publication and launch of the book, Australia and Timor-Leste reached an agreement over the Timor Sea boundary (although details are yet to be publicly disclosed).

Despite the promising start to the year, the concluding tale of 2017 was all but comfortable for the nation. After several years of a national unity government alliance between the FRETILIN and CNRT parties, the alliance, which was expected to continue, collapsed. CNRT powerbroker, former prime minister and former president, Xanana Gusmao, publicly moved to end the alliance as a result of the fall in public support to CNRT. Under the CNRT-FRETILIN government alliance, both parties had a stranglehold of seats in parliament (55 out of 65), effectively ruling out a legitimate opposition force at the time. The alliance discontinuation suggested the possibility of a stronger opposition force, although the opposition ended up being stronger than the government itself.

Forming a government proved to be difficult for FRETILIN after the 2017 election, with KHUNTO pulling out of a coalition agreement with FRETILIN and PD at the final hour. The alliance of opposition parties in parliament ended up having a majority of seats, making the FRETILIN-PD coalition a minority government. As a result of these developments, bills brought to the parliament were unable to pass due to the opposition force, requiring that President Guterres dissolve parliament.

Where do these events leave Timor-Leste and its growing youth bulge? The economy has stagnated and is at risk of economic collapse by 2025, as the nation’s sovereign wealth fund (the Petroleum Fund) risks depletion in the face of diminishing oil reserves. Further, unemployment is rampant in the country, especially among youth. Lack of employment opportunities has the ability to harbour discontent among citizens, and civil unrest among young people as a result of this would be unsurprising.

Some of the smaller parties that saw success in the 2017 election recognised the growing discontent among the youth bulge, and adjusted their policies accordingly. The PLP party mainstreamed youth issues, particularly youth unemployment, during the election campaign. The KHUNTO party is a youth-run party, helping to improve the representation of young people and youth issues in parliament. Both parties honed in on the discontent among youth, focusing their policies on improving living conditions, public facilities and employment opportunities.

In the face of a young population, where nearly 70% of the population is under 30, the older leaders of the 1975 resistance generation still hold a significant amount of power in politics. Even though national hero Xanana Gusmao has moved to the backbench, he is still the figurehead of CNRT, and decision-making still lies within his hands. Prime Minister Alkatiri of FRETILIN, another resistance leader, regained the prime ministership over a decade after he last held office – he was the first prime minister of independent Timor-Leste in 2002.

This generation of leaders made immense contributions to the push for Timorese independence. They are ageing though, and younger politicians are offered very little opportunity to increase their leadership aspirations or provide any legitimate decision-making power. The unwillingness of the older generation to properly address the youth discontent with politics and share power with the younger generation is unlikely to change, at the expense of the public.

It is difficult to know what the immediate future holds for Timor-Leste. The Timorese went into their last parliamentary elections voting for change but unfortunately the vulnerability of a minority coalition government has put the government at a standstill. At a time with an increasingly uncertain economy, high youth unemployment, and growing youth discontent with the political climate, this is a further setback. Hopefully the upcoming election can bring with it a new generation of leaders and restore stability in the government. If there was a beam of optimism in all of this, President Guterres highlighted it best:

We will all go to elections to improve our democracy.