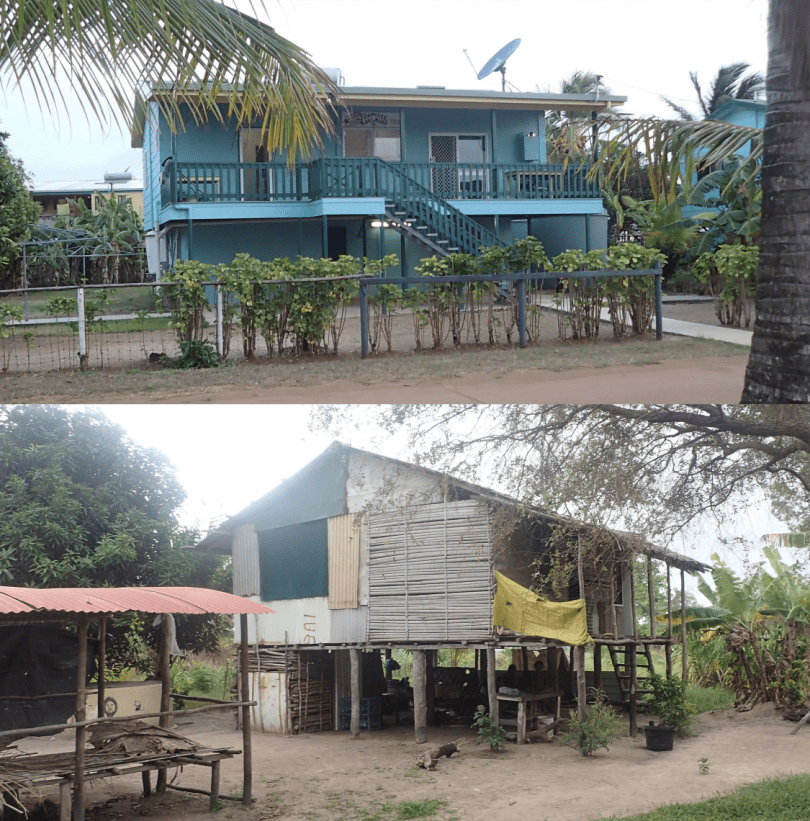 Houses either side of the border (Mark Moran)

Too close to ignore: Australia’s borderland with Papua New Guinea and Indonesia, edited by Mark Moran and Jodie Curth-Bibb, and published earlier this year, is a fascinating book, with detailed, rich descriptions of life in the South Fly – the PNG mainland that borders the Torres Strait Islands, the closest of which is only four kilometres away – and of Australia-PNG interactions in this part of the world.

Treaty villagers are those who live in one of the 13 villages whose residents are entitled under the treaty to travel to the Australian islands, strictly speaking only for “traditional” purposes, but in practice for a range of reasons, from seeking health care to accessing ATMs to selling goods and labour – the latter often for as little as $10 a day. (Note: even travel for traditional purposes is currently banned due to COVID-19.) Australian-citizen Papuans are those originally from the PNG mainland who had been living on the Australian side for at least five years prior to PNG’s independence. They were allowed to stay on.

There are four tiers, but the greatest inequality by far between the top two and the bottom two, that is, across the border. To quote from Chaudhry once again: “[T]here are few places in the world where such stark inequality exists between two places that are so close. On the one hand, Torres Strait Islanders enjoy material conditions and level of public service provision comparable to mainland Australia… Just across the borders, villages in the South Fly … face government corruption, crippling water shortages, a lack of basic infrastructure and services, and limited employment and livelihood opportunities.”

A key difference is that there is no welfare system in PNG: no “free money” as the South Fly residents call it. But it is more than that – as the editors write, “the people of South Fly District of PNG endure a near-total failure of governance and service delivery.”

This inequality is in your face, and growing. The two sides of the border looked very similar at independence. Now they couldn’t be more different. The authors’ surveys reveal stark poverty in the South Fly. One respondent put it simply: “I’m still living in a biri [leaf] house while the Torres Straits people live in luxury houses.”

The authors explore a range of topics from livelihoods to governance, from fishing to trade, and from mining to NGO projects. They are united in their view that Australia should do more: it should relax the rules to allow more travel, and it should provide additional aid to “address the vast socioeconomic disparity” on either side of the border, as author Kevin Murphy puts it. It is in Australia’s interests, and it is our moral duty, they argue.

I am less convinced by these normative arguments than the authors’ analysis.

Start with the recommendation that the treaty should allow more travel – by more people, from more villages, for more reasons. As a supporter of migration, I certainly support this call, but politically it seems like a non-starter.

Nearly all travel is now one way, south. On the Australian side, Kevin Murphy concedes that “many Torres Straits Islanders would prefer the number of Papuan visitors be reduced rather than increased.” On the PNG side, easier access to Australia is an issue often raised by PNG politicians, but not on behalf of the people of the South Fly. PNG potentially has a lot of leverage: several of the Torres Straits islands are within PNG maritime boundaries.  But Murphy notes that “[t]he PNG Government has shown little interest in representing the interests of its citizens in the border region,” failing, for example, even to put in a submission to an Australian parliamentary inquiry into the treaty. Without political support on either side, any relaxation in treaty-related provisions and practices seems highly unlikely.

What about supporting development in the South Fly? This is certainly more doable. Australia has already carved out particular areas of PNG it gives disproportionate amounts of aid to: Kokoda (because of World War Two); Bougainville (because of its history of conflict, and push for independence); and Manus (when we want PNG to take some of our asylum seekers). And Australia does already provide some aid specifically for the South Fly, in particular to Daru Hospital to combat drug-resistant TB.

Should Australian aid be more focused on the South Fly? It sounds like this is the direction in which the aid program is going. The most recent Australian plan for aid to PNG says that Australia “will pilot a more integrated approach to engagement in South Fly district, Western Province, reflecting our shared strategic and development interests in this region.”

I’ll leave aside the strategic interests, except to say that they are unclear. If our aim is to reduce migration pressures, supporting development can have the opposite impact. In terms of development, it is certainly true that the South Fly remains a relatively poor region of PNG, due to its disadvantaged geography and poor governance. In their 1997 paper, “Poor rural places in Papua New Guinea”, Bryant Allen, Mike Bourke and John Gibson pose the question: “Should funds be invested where the returns will be highest, or where the need is greatest?” The authors note that the dilemma is acute, but also that persistent geographical inequality in PNG makes the latter strategy unlikely to succeed.

Both the South Fly, and the Western Province of which it is part, benefit from the Ok Tedi mine. That mine has certainly been a mixed blessing, with some horrific environmental impacts, well documented in the book’s chapter on the subject. But the province and affected communities, including in the South Fly, are now major mine shareholders. Because of its access to mining revenue, Western Province has been assessed by the PNG government as one of the few provinces not to have a gap between its internal revenue and its minimum spending needs (Figure 1 of this NEFC report). Moreover, the Sustainable Development Program, one of the biggest NGOs in PNG, is now active again (after a political and legal dispute with the O’Neill government). It has a $US1.5 billion endowment, funded from its earlier majority stake in the mine, and now operates with an exclusive focus on the Western Province (see p.15 of this report).

Whether or not you agree with the authors’ policy proposals, by reading Too close to ignore you will gain invaluable insights into these two closest yet furthest apart of neighbours, Australia and Papua New Guinea. For the stark inequality between the South Fly and the Torres Straits Islands is simply a version in extremis of the inequality between the two countries of which each is a part. After all, as the authors remind us, Torres Straits Islanders are themselves “disadvantaged relative to the remainder of Australia.”

Indeed, one can go further. Reading this book will bring to life and surely motivate the reader to act on that abstract but fundamental fact about the world today that, as Our World in Data’s Max Roser puts it, “what matters most for your living conditions is the good or bad luck of your place of birth.”

Too close to ignore: Australia’s borderland with Papua New Guinea and Indonesia is edited by Mark Moran and Jodie Curth-Bibb and published by Melbourne University Press.