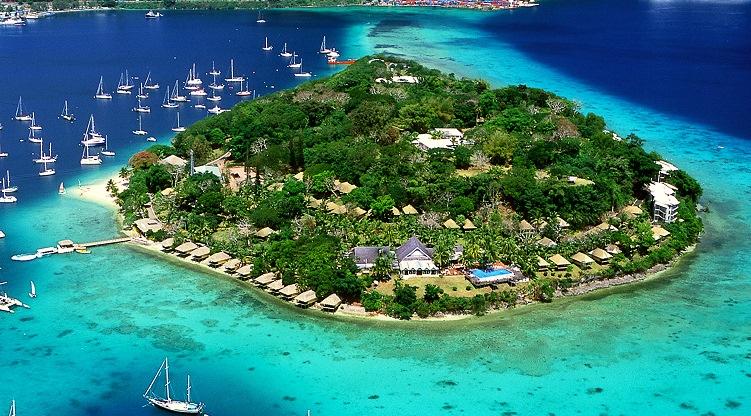 Vanuatu’s formal economy is dominated by the tourism industry. Tourism is estimated to contribute 65 percent of Vanuatu’s Gross Domestic Product, directly and indirectly, with the growth of tourism supported by Vanuatu’s second most important contributor to the formal sector, construction. Together, tourism and construction activity have driven economic growth in Vanuatu over the last decade. However, this growth has not benefitted ni-Vanuatu equally, with development centred in Vanuatu’s most populous island, Efate. Few tourists venture outside of Port Vila, and few infrastructure projects are focused on development of rural areas. Within Port Vila, the benefits of growth have also not been distributed equally, with much of the medium and larger business segments of the private sector in Vanuatu consisting of foreign-owned businesses.

It is unsurprising in this context that a ‘national conversation’ about the importance of economic growth that is more inclusive and sustainable should take place. This conversation had commenced prior to the passage of Cyclone Pam and now continues to be pursued with increased vigour given the storm’s impacts, and a perception that Vanuatu is at a ‘crossroads’ with the commencement of reconstruction. A key focus of the discussion has been on the development of sectors other than tourism, which is often framed in terms of economic diversification. Arguments in favour of diversification, such as those in this popular article that featured in The Conversation, point to Vanuatu’s ‘disproportionate dependence on tourism’, which is said to both make it vulnerable to economic shocks and to limit the extent to which growth is inclusive.

One of the problems with these conversations is that the terms ‘diversification’ and ‘self-sufficiency’ are not clearly defined, and as a result, are often used inappropriately. Diversification is the opposite of specialisation. It involves doing (or holding) more things, or in the context of this debate, expanding other economic sectors in Vanuatu at the expense of tourism. Does this make sense in Vanuatu?

Before proceeding, it is worth noting that there is a lot to be said for specialisation. Indeed, the specialisation of occupations forms the foundation of modern capitalism (as discussed in Adam Smith’s Wealth of Nations), which for all its faults, has resulted in higher living standards around the world. The proportion of the world’s population that lives in absolute poverty has never been lower.

At a national level, specialisation enables a country to focus its economic activity in areas where it performs well or has a ‘comparative advantage’ (drawing on Ricardo). This is especially important in a small country. Attempts to produce everything, or even most things, are not only impossible, but are harmful to the economy as a whole as they inevitably involve taking resources away from well-performing areas (such as tourism) in order to subsidise poorly performing areas.

This is not to say that countries should not explore economic opportunities or better ways of doing things. Doing so is key to increasing productivity, which in turn, provides the basis for sustainable increases in living standards. [Furthermore, despite the frequent (mis)use of the theory of comparative advantage to argue against any industry policy, comparative advantage is a static concept, meaning it looks only at current productivity levels and says little about how a country can increase productivity in the future.]

It is important to bear such arguments in mind in this ‘national conversation’, given calls to explore development of manufacturing, industrial zones, deep-sea mining, and various activities in which it is clear Vanuatu cannot compete in international markets. Despite calls for Vanuatu to diversify, the country’s ‘natural’ comparative advantage in tourism is obvious, given its beautiful climate, scenery, enduring kastom, and proximity to major tourism markets.

There are two key arguments that have been used to support the case for diversification in Vanuatu, neither of which is without problems.

Proponents have argued for diversification on the grounds of risk reduction, pointing to the ‘acute vulnerability of tourism-dependent economies’ when making the case for diversification into other industries. The problem with this argument is that it assumes that diversification will reduce risk. But the alternatives in Vanuatu to which proponents of diversification point are also ‘high risk’ activities. Agricultural exports are subject to the whims of quarantine policy in Australia and New Zealand, which is influenced by small and highly organised domestic agricultural lobby groups. Agricultural production that is tied to the tourism industry will have no impact on the risks of a downturn in tourist arrivals (although it is worthwhile pursuing for other reasons). Diversification into agriculture also does nothing to address the risks associated with natural disasters: agriculture is as prone to cyclone-related damage as is the tourism industry. Other potential industries, such as the offshore financial centre, are also ‘high risk’, albeit in a different sense (just look at the extreme case of Nauru, whose offshore financial banks were used to launder money in the early 2000s, subsequently leading to international sanctions).

That is not to say that there are no opportunities for risk reduction. One clear economic opportunity that can reduce exposure to downturns in tourism (and is also resistant to natural disasters) is labour mobility. There is scope to build on Vanuatu’s positive experience [pdf] with labour mobility, including its success under the RSE scheme in New Zealand. Since the passage of Cyclone Pam, ni-Vanuatu people have demonstrated a sustained and increased willingness to take up opportunities to work overseas to generate funds for rebuilding and livelihood maintenance. However, the pursuit of labour mobility opportunities also requires appropriate support to ensure that it does not undermine the resilience of sending communities.

The second argument in favour of diversification is that other economic activities are needed to support inclusive growth and to benefit rural Vanuatu. This argument holds more weight. However, the assumptions here are that (a) tourism cannot be made more inclusive, and (b) other economic activities are more inclusive. Neither assumption is necessarily true. Just look at the non-inclusive growth driven by the resources sector in PNG (would deep sea mining in Vanuatu be any different?), or the more positive experience of Samoa, which demonstrates that tourism can result in inclusive growth.

In our view, advocating economic diversification in Vanuatu is a distraction from the more important goal of making economic growth more inclusive. This should certainly entail developing Vanuatu’s economic opportunities in select areas, such as through the pursuit of labour mobility opportunities, and the production of low yield, high value crops like coffee, honey, chocolate, vanilla and coconut oil. However, it should also involve making tourism more inclusive, through better links between tourism and agriculture (the supply of agricultural goods to resorts and hotels is an obvious starting point). There is great potential for the expansion of tourism to areas outside of Port Vila (through, for example improving domestic air transport links). It has long been a concern that the tourism sector is too Port Vila-centric (including in the oft-cited case of cruise ship [pdf] visits). There are signs that the importance of these approaches are increasingly recognised by government (e.g. through increased budgetary allocations to productive sectors such as agriculture) and development partners (e.g. through support for marketing of ni-Vanuatu properties and tourism products).

The fact is that tourism will remain central to Vanuatu’s economic future. It is Vanuatu’s most important source of foreign exchange, providing a means by which Vanuatu can pay for its imports, and thereby can achieve a level of self-sufficiency of which many other small Pacific island countries are no doubt envious. The government is right to explore new economic opportunities, as well as looking at ways to make the tourism industry more inclusive. An economic strategy aimed specifically at reducing Vanuatu’s reliance on tourism, however, is not the answer.