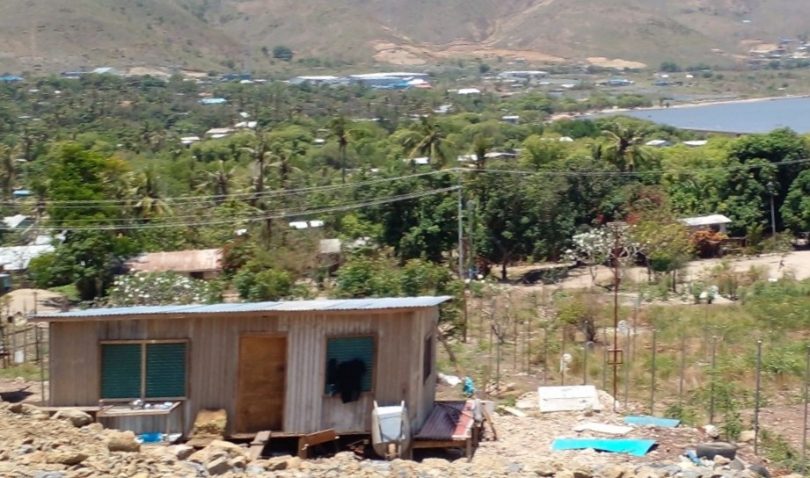 Joyce Bay settlement, formerly known as Horse Camp, is a notorious settlement in Port Moresby, Papua New Guinea (PNG). It has been known for criminal activity, and as a place where many criminals live.

The settlement is located in the Port Moresby South Electorate of the National Capital District, and is one of the oldest settlements in the city. The community includes people from Gulf Province and at least 11 other ethnic groups from throughout PNG. The population was estimated at more than 10,000 in 2013, and is believed to be around 13,000 now. The rapid increase in the population (from about 7,000 in the year 2000) reflects an influx of migrants from rural to urban areas, seeking employment opportunities and access to improved health and education services.

Over the last few years, some major changes have taken place within the community, which have brought radical shifts to people’s mindset and behaviour. New infrastructure development, and projects providing opportunities for youths and business development, have contributed to a transformation for the Joyce Bay settlement.

According to a report by the Asian Development Bank, the Joyce Bay community had limited livelihood options in 2013. The most common jobs were security guard for males and shop assistant for females. Some women worked as market vendors, selling fresh food brought in by producers from the outskirts of Port Moresby. There were a handful of skilled people such as carpenters, plumbers and painters, who were engaged in ad hoc contracts. Wages were low, with no system to enforce minimum wages for casual or part-time workers. These workers also had limited access to credit.

Starting in 2013, the Ginigoada Foundation, with City Pharmacy Ltd and the National Capital District Commission (NCDC), has opened up opportunities for youths, and others, to attend financial literacy training and small business training. This has empowered them to venture into new business activities to improve their lifestyle and sustain themselves.

In that same year, Joyce Bay underwent major road works, providing much needed access to transport within the settlement after decades without. This was funded by Moresby South District Development Authority and the NCDC. This has paved the way for other infrastructural developments to take place, including a sewerage system and water supply.

In 2016, a local community hall was constructed. The community hall has a conference room, store room, kitchen and toilet. It also has a multipurpose sports court that can be used for community events.

A number of local churches were also established, during the early 2000s, including my church.

Taken together, this is a big impact project situated in the heart of the community. It has been championed by the local MP, Justin Tkatchenko, who is keen on rapidly transforming his electorate.

Alongside these positive developments, I’ve observed changes in people’s behaviour and attitudes. Youths have been kept busy with sports, which reduces thoughts of engaging in illegal activities. The church has also attracted a lot of youths to its programs and activities, which has contributed to the big improvement in the community.

When I came to Port Moresby in 2018, I met up with some of the boys from my church. Joe Alfred, Paul Kore and Sasae Ray are some of my best friends, and have been living in the area since the 1980s when their families migrated from Gulf Province. I asked them about the stories I heard about the community, and they said it was far worse before than it was now.

Joyce Bay was a no-go zone, and I was so afraid to go there myself for our church fellowship. After my first visit, I was more nervous and afraid and had to ask my friends to escort me to and from the bus stop and the church. Fast forward to today, and I’ve spent three years moving around the Joyce Bay community every weekend. I’ve witnessed the improvements as well as heard about them.

In Joyce Bay, there are a lot of challenges which are yet to be overcome, for example, in terms of good water supply and other sanitary solutions to improve the health and hygiene of the community, and improved drainage as the Joyce Bay area is subjected to flooding during the rainy season. Unemployment remains a challenge in the community. But the future looks much brighter for Joyce Bay inhabitants.