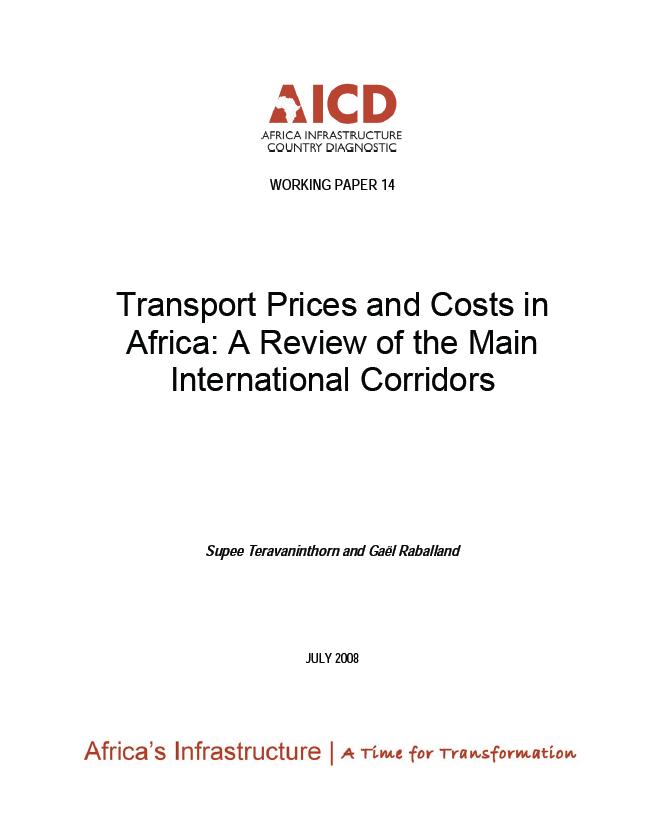 Since wages in Africa are low, and road transport is a labour intensive industry, transport in Africa should be inexpensive.  But it’s not, and quality is low. Past studies have generally concluded that improving infrastructure will reduce operating costs and hence prices for transport.  But despite substantial infrastructure investment transport costs have remained high.  Why? As the World Bank’s former Sector Manager for Transport in Africa, I asked two Bank transport economists Supee Teravaninthorn and Gael Rabelland to investigate this question. Their report [pdf], which was released in 2009, broke new ground both in terms of the approach used, which was  new (subsequent studies on Central Asia corridors have also used their approach) and the results.

Partly because of the similarity of production in neighbouring countries, and partly because of trade barriers, much of cross-border African trade is overseas, not sub-regional.  Africa has several landlocked countries (sixteen, after the creation of South Sudan in 2011) that depend on ports in neighbouring countries for international trade.  The distances from ports to major inland African cities are in the 1000-1500 km range, and three countries (Zambia, Rwanda, and the Central Asian Republic) are in the 1500-2000 km range.

Logistics in Africa are organized along key trade and transport corridors originating from seaports which can be classified sub-regionally as West (ports are Abidjan, Tema, Lome, Cotonou, Dakar), Central (Douala), East (Mombassa, Dar-es-Salaam) and Southern (Durban, Maputo, Beira).  The Southern corridors carry more much more by far than all the others combined (annual exports of about $65 billion, imports of about $70 billion) while the each of the other three carry roughly equal amounts (exports of about $7 billion,  and imports about the same, each).

Supee’s and Gael’s study (let’s call it the SGS) is the first comprehensive attempt to explain transport costs in Africa by disaggregating possible factors and using empirical evidence.  They looked at four corridors, one in each subregion and examined (i) infrastructure network quality, (ii) factor costs (such as fuel labour equipment), and (iii) market economics (regulation, structure of firms, and trade and transport procedures). SGS was carried out in three phases: (a)  a large trucking survey aimed at understanding the operations of trucking services; (b)  field visits to supplement preliminary findings, collect quantitative information, also tried to identify policies that could lower the cost and price of transport services; and (c) putting it all together — quantitative analysis  combined with the qualitative information of the field visits, to derive conclusions and policy recommendation, and workshops to discuss results with stakeholders.

SGS turned up a wealth of information which can hardly be done justice to in a blog.  Here are a few of their findings, and interested readers can access SGS on the World Bank’s website.

Any intervention must aim first at reforming cartels.  This is less a technical issue than a political one: the authorities themselves are often connected with such firms, and hence truckers have powerful leverage.  Reforms will also have social ramifications since in a liberalized competitive market a much smaller number of trucks can serve the market efficiently — and compensation schemes will likely need to be a part of any reform effort.

Thanks to competitive markets, measures that will reduce costs will also reduce prices on these corridors.   The most effective measures in East Africa would be reduction in fuel costs and improving the condition of the corridors.  Reducing times for border crossing will also have a positive effect, but not as much, and   reducing informal payments will have a minimal impact.    In Southern Africa, conversely, reducing delays at border crossings will have the biggest effect on costs, followed by a decrease in fuel prices.  Roads are already in good shape and thus effects of road improvements will be marginal on costs, as will any reduction in informal payments.

Putting this all together policy actions that come out of the study are as follows: