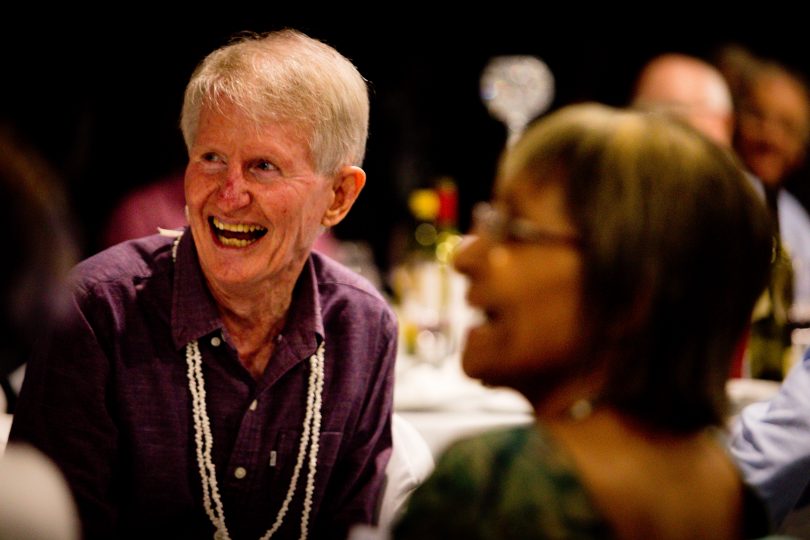 As Sean Dorney pointed out, it’s not usual for journalists to be surrounded by people saying nice things about them. But on Saturday night in Brisbane, 150 people got together to do just that. In response to the announcement that he has been diagnosed with motor neurone disease, friends, colleagues and former rivals came together to eat, drink (some more than others), and tell stories.

Getting to know Sean and spend time with him has been one of the highlights of moving to Brisbane. After our first meeting last year, he gave me a copy of ‘The Embarrassed Colonialist’. He had recently returned from PNG, where he had been part of the Commonwealth Observers Group during the elections. We had spent an hour or so discussing PNG politics, the success of the PNG Hunters in the Queensland Cup, and much more besides. His detailed knowledge of Papua New Guinea and his passion for the country were writ large during our conversation. Just as they are in the book. And on Saturday evening, his commitment to PNG was equally evident, as was the continuing presence he has in that country. There were messages of support from Peter O’Neill and two former prime ministers. And Tania Nugent spoke of how Sean had ‘planted the seed’ for a generation of journalists, not just in PNG but across the region.

Of course, Sean’s relationship with PNG is one that spans many years and has several facets to it. He first went there in 1974, just before independence, to work for the newly-established National Broadcasting Commission. It was during that first three-year stint that he met his wife, Pauline. This was one of three postings to PNG, including a period of 17 years as the ABC’s PNG correspondent. A keen sportsman, Sean is well remembered as having captained the national rugby league side, the PNG Kumuls. On leaving the PNG desk, Sean took on the role of Pacific Affairs correspondent for the ABC until 2014. He is currently a non-resident fellow at the Lowy Institute.

The Embarrassed Colonialist was commissioned to mark the 40th anniversary of PNG gaining independence from Australia. It came at a timely juncture and has made an important contribution to the conversation about the nature of Australia’s relationship with its nearest neighbour. Dorney’s perspective differs a little from that of other commentators, in that he grounds his analysis in the significance of the colonial relationship, or rather the impacts of Australia’s apparent desire to pretend that it never existed:

Forty years after PNG’s independence, Australia needs to accept, rather than escape, its colonial past. It needs to do so not in any negative or paternalistic sense; I am certainly not suggesting that the best way to deal with PNG’s many problems is for Australia to resume a colonial posture. Rather, we need to acknowledge our colonial past as a starting point for a deeper engagement with PNG today (p.4).

Although the book is now a couple of years old, much of what it contains remains pertinent and meaningful. Many of the tributes to Sean that we heard on Saturday night reinforced just how influential he and his work have been. Diplomats, politicians and academics hold his advice and insights in high regard even when they disagree with him.

Sean is fully aware that some of what he says is not always easy for people to hear. In The Embarrassed Colonialist he makes reference to the apparent ‘disdain’ shown by Australian officials in PNG towards long-term Australian expatriates, a group he considers has valuable insights to share:

…most of the Australians who decided to remain in PNG or who have spent a considerable number of years there have wonderful connections and deep friendships with the people. And they know how the country operates. This does not mean they are smarter than the Australian officials who have just arrived. But it does mean that they could be a valuable source of advice. There seems to be an unfortunate attitude among some in Canberra that not only are all Papua New Guineans corrupt, but any Australians who live in the country and love it are somehow tainted as well (p.76).

The fact that he is prepared to say it how he sees it rather than make it more palatable for Australian officials adds to his credibility, which is built on the strongest of foundations, as we heard on Saturday night.

The book is a reflection of much that is great about Sean Dorney. It encapsulates his love of Papua New Guinea, his deep and nuanced understanding of that country’s history and present, and his hopes for its future. Dorney’s writing style is masterful, as expected, making this a very easy read. The text is presented with intellectual clarity and readers should expect to be challenged by what it contains.

Hearing Sean speak on Saturday evening, I was again reminded of why the book made such an impression on me. His humour and intellect were on full throttle. His generosity was evident throughout the night as he greeted everyone and posed for countless photos.

Facing a future that includes motor neurone disease is no easy task. It was evident on Saturday night that Sean intends to do that with fortitude and good humour. He can add to that the immense amount of respect and affection that was on display during Saturday night and which will no doubt continue.

Please note the earlier version of this post incorrectly stated that Sean Dorney handed over the PNG desk to Liam Fox.