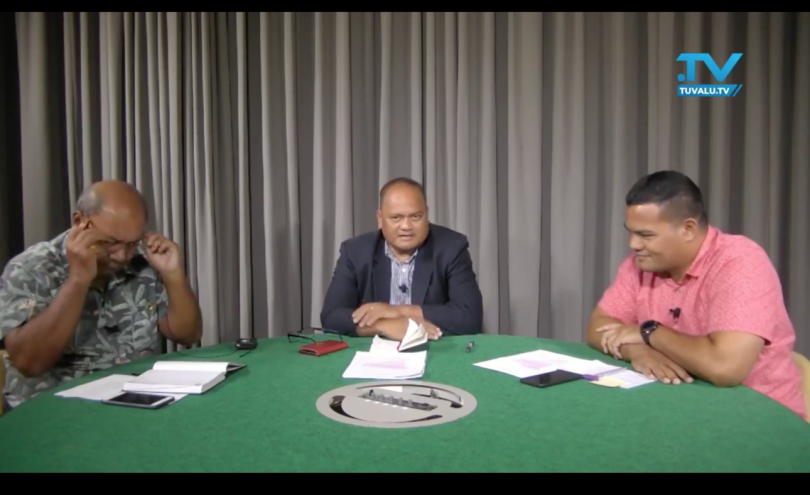 For the first time that I can remember, a sitting Minister of Foreign Affairs in the Tuvalu Government has publicly discussed what a Tuvalu Foreign Policy should contain. A conversation between the Minister of Justice, Communication and Foreign Affairs Honourable Simon Kofe and two experts was recorded and broadcast on Tuvalu.TV news on 19 May 2020. This initiative by the government to begin talks and consultations on rebuilding Tuvalu’s foreign policy has been one of the new government’s priorities. The conversation paved a pathway for Tuvalu to be more fully recognised in the Pacific region, and most importantly, by the international community: not just as a country that is vulnerable to climate change, but by strong values, traditions and culture that are uniquely Tuvaluan. Tuvalu wants to portray a different image – because Tuvalu is not about being one of the least-visited countries in the world; it is not about being one of the most vulnerable countries; it is not about dot-TV URLs; it is not about being a developing country. It is about its people. It is about who we are as Tuvaluans and what makes us unique. One of the experts in the broadcast, Feue Tipu, stated: “We don’t have to pretend to be somebody else, Tuvaluans need to be Tuvaluans.”

The conversation about Tuvalu’s role in the international community is timely. COVID-19 might seem to be negatively impacting on most countries around the world, but for some, such as Tuvalu, it is also about rediscovering who we really are and how we interact with our people and our neighbouring countries, especially in the Pacific region.

When Tuvalu started to close its borders to the world because of fears of COVID-19, the Honourable Simon Kofe discussed the important Tuvaluan concept of fale pili which translates to ‘my neighbour’. He explained to other Foreign Ministers from the Pacific that we (the Pacific community) need to embrace this concept. Kofe explained that fale pili has a deep and unique meaning to Tuvaluans: if you have a neighbour, you treat them well, you share your fishing catch with them, you let them in your house as if they are members of your family, and you help them look after their children and old people.

This means that we, as Pacific Islanders and as neighbours, should embrace this concept and ensure that any Pacific Islander who is not a citizen or resident of that Pacific country will be cared for and treated as if they are one of them, particularly during times of crisis such as the COVID-19 emergency. So, if there are other Pacific Islanders living in Tuvalu who are not Tuvalu citizens or residents, the Tuvalu government will ensure that they are being looked after as if they are Tuvaluans themselves. This concept of fale pili was welcomed by all Foreign Affairs Ministers at the online meeting.

Returning to the topic of rebuilding Tuvalu’s foreign policy, fale pili will be one of the concepts that will become part of its foundation. The Honourable Simon Kofe expressed his intensions of ensuring that the new foreign policy will illustrate and demonstrate the values, traditions and culture of Tuvalu. Feue Tipu reiterated this sentiment, pointing out the importance of having a foreign policy that reflects what Tuvaluans want people in the international community to see and understand about the people of Tuvalu. The discussion centred on several other concepts, all of which resonate strongly with Tuvaluan cultural values. These include aava, meaning respect or being respectful, particularly towards your neighbours. Then there is alofa (love or being loved) which means looking after and caring for those who have no lands, those who are not Tuvaluans (foreigners), and families that don’t have members who can go out fishing or farming.

Then there is kaitasi (sharing everything amongst family members, sharing of land, decisions, development, resources, etc.). In the context of foreign affairs, the world is seen through this concept as a kaitasi because whatever happens in one part of the world affects other communities and countries, as we see with the COVID-19 pandemic. An approximate translation thus might be “oneness and interconnections”. As Kofe stated in the debate, “I see the world as a kaitasi because whatever happens in another part of the world or another country, other countries are or will be affected in some way or another.”

Foreign policy in Tuvalu has, according to Kofe, reached a point where the history of the colonisation of Tuvalu needs to be addressed. Around 1892, Great Britain arrived in Tuvalu and set up its administration, under an agreement signed by the last King of Funafuti (King Elia). In those days, the people had the mentality that whatever the British brought to Tuvalu was far better than what we Tuvaluans had. Kofe powerfully pointed out that, though we once felt inferior to foreign powers, the time has come to shift that paradigm because our views, our values, our traditions and our culture are not inferior and we can decide on what we think is best for our own people. It is not up to others to think and decide our future. Our positions and our decisions reflect our values as Tuvaluans and we should not feel small and inferior during negotiations with other countries. This was evident when Tuvalu separated from Kiribati, formerly known as the Gilbert and Ellise Islands, and also became independent from the British colony. The British expected Tuvalu not to be able to survive and function because it is so small. The Tuvalu elders responded by saying that Tuvaluans had lived and survived on their own for thousands of years and would continue to survive with or without assistance from the British. Tuvalu became independent to protect its values, culture and tradition from being eroded by colonialism and we have proven the critics wrong.

The new foreign policy should support authentic decisions and we should speak with conviction when we negotiate or discuss matters of concern to Tuvaluans. By the same token, we should be proud of our ideologies, but we should also respect and consider those of other countries. Most importantly, we need to ensure that our values are not lost in our dealings with regional and international partners. Tuvaluans have always and will always believe in their strong values, culture and tradition.