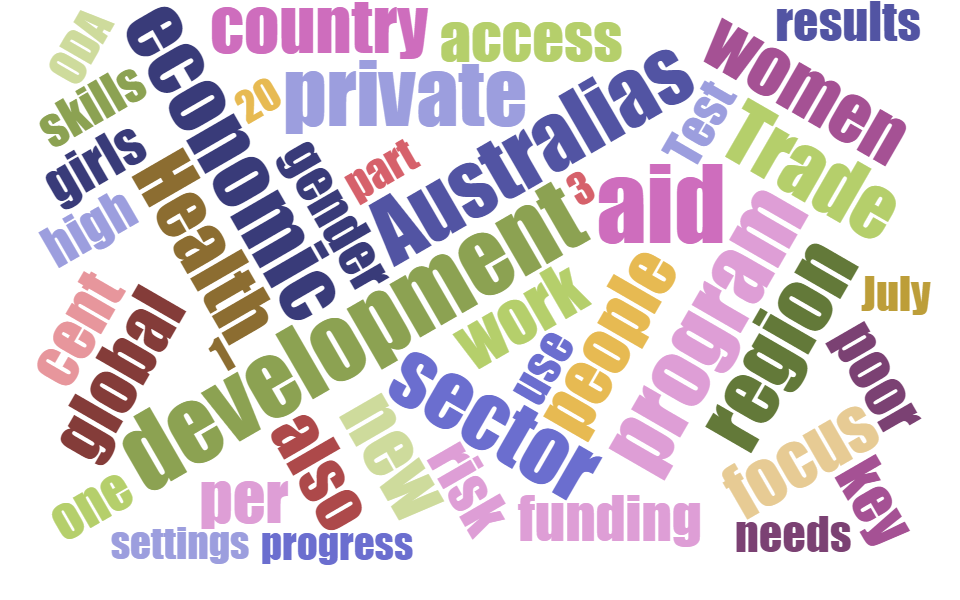 Development doesn’t have a way with words. It scrunches names into acronyms. It potholes sentences with jargon. Its grey literature is drearier than grey. Words get their revenge too. They confuse, they strive for prominence, they rig the game. Or they hide shyly, letting themselves be avoided when they should be used more often.

Words shape our thinking — and here are two words the dialects of aid work and development thought would be better off without, as well as two words we ought to use more often.

While it would be bad for the word count of some journals, ditching the term ‘neoliberalism’ would be great for critical thinking about development. I say this not because I think free markets are miraculous or because I think trying to solve economic crises with pro-cyclical policies is a good idea. My issue with the word neoliberalism is that among parts of the left it has become nothing more than a synonym for ‘stuff we don’t like’. This leads to all sorts of confusion: to post-development thinkers the problem with neoliberalism appears to be that it promotes economic development; while to left-leaning economists [free registration required] one of the problems is that it impedes it.

Even when the term is used intelligently it is still too crude, at odds with the complex history of the last four decades of development. These have been decades in which some countries used industrial policy to great advantage, while others just wasted money; decades in which government spending has brought some countries human development gains, while other governments have lost similarly intended spending to corruption; and decades in which globalisation has reduced poverty in countries such as China, but done less to help in some other parts of the world.

Amongst all this there are plenty of debates to be had about the role of the state, the role for aid, and even what the ultimate end goals of development should be, but given the complexities involved, single catch-all epithets like neoliberalism are worthless.

Whereas neoliberalism is a well-worn battering ram afflicting general debates about development, innovation is a term that has, in the last year or so, burst into a particular part of development: the aid scene (and especially the Canberra aid scene).

My problem with innovation isn’t that I’m against trying to find new ideas to solve old problems. Rather, I find the word objectionable in part because it is unobjectionable: it’s loaded, so full of positive connotations that it affords an advantage to almost any claim made in its name. It’s also misleading, because it suggests that many of the problems that continue to plague aid work do so simply because no one has had any bright ideas for solving them. But problem solving has been around as long as aid work has.

There’s also an issue in the way that innovation is associated with an idealised take on the private sector — a private sector that innovates to provide us with smart phones and tablets, and so on. The private sector innovates, therefore we should too! The trouble with thinking like this is not that the private sector is bad, but rather that when the private sector innovates successfully, it does so as a consequence of a combination of consumer choice, the invisible hand of the market, and something akin to creative destruction — forces which winnow out bad ideas and promote better ones. Even this is a flawed system, which requires the state to provide rules and watchdogs, alongside occasional bailouts and research subsidies, but it is a system with something akin to feedback loops. The world of aid is characterised, on the other hand, by impacts felt in far flung places, politics and political risk aversion, poor data, and a reluctance to talk about failure. It is, in other words, a very different system. And there’s no reason to think innovation à la the private sector will work wonders within it.

This isn’t to say we should give up on improving aid work. However, there’s a much better — if more modest — word for the best means of doing this: learning. Particularly, institutionalised learning, which in aid work involves good monitoring and evaluation within aid programmes, and staff who have the time to absorb and adapt. Mercifully, I’m not the first person to have the idea that aid learning is important: some NGOs, donors and multilaterals do it well and, like problem solving, learning is as old as aid itself. But learning takes money and staff, and wants for glamour (particularly political glamour), and much of the aid world still doesn’t learn as well as it should.

For different reasons, beyond aid, in the realms of development debate more generally, learning is slow and sluggish too. Here the issue is sometimes simply that good development research is not easy. But sometimes the problem is also that for many people (including academics) polemic is more satisfying than caveats, qualification and complexity.

The other word I wish we used more often is also modest: context. Because different types of aid have led to different outcomes in different countries, and because different developing countries face different challenges, context ought to be one of the most prominent words in the lexicon of aid and development.

The good news is that context isn’t completely ignored: academics study countries, and aid programs learn about country contexts, even if often through the informal learning of staff at post. But the idea that context matters, that it is worthy of much more study, and that it should be a central force shaping aid work, has not had a heyday yet. Which is a pity — affording prominence to context would be, well, innovative, and we would learn.

Terence Wood is a Research Fellow at the Development Policy Centre. His PhD focused on Solomon Islands electoral politics. Previously he worked for the New Zealand Government Aid Programme.