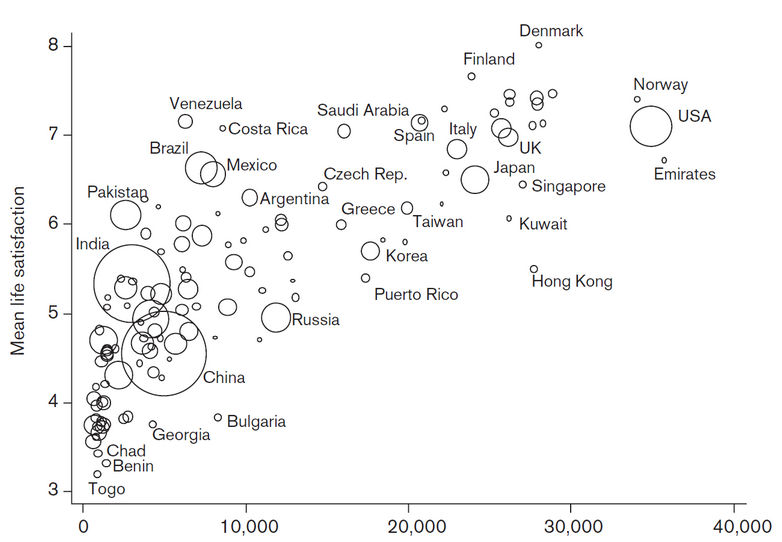 Over two weeks in 1996 I travelled between extremes of the public transport spectrum. At one end were the buses of Sumbawa in Indonesia – grumpy, diesel-spitting creatures that lurched their way around potholes taking hours to get anywhere. At the other end was the London Underground. Trains were frequent, quick and – despite everyone’s complaints – mostly on time.

Compared to the bus riders of Sumbawa, all but the poorest travellers on the London Underground were also wildly wealthy. And yet they appeared miserable. Commuting in silence. Pale, staring at their shoes. The Sumbawan bus travellers, on the other hand, were full of cheer. The buses rang with talk and laughter.

For a time this contrast led me to question the merits of development. If London was wealthy but glum and Sumbawa poor but happy then — I thought — perhaps we should abandon development and live like Sumbawanese? Such thinking was common currency on the backpackers’ trail. And something similar is also, I discovered when I did a Development Studies degree in 2003, common currency amongst an influential group of intellectuals, the so-called ‘post-development’ thinkers. The first book I was assigned to read for class was The Development Dictionary a post-development tract edited by German academic Wolfgang Sachs, in which a range of well-credentialed researchers excoriated the development enterprise, taking the doubts of backpackers and fortifying them with critical theory (you can download the 2008 edition of the book here)*.

“For more than a century, technology carried the promise of redeeming the human condition from sweat, toil and tears. Today, especially in the rich countries, it is everybody’s best kept secret that this hope is nothing other than a flight of fancy.” (p. xvi)

“[D]evelopment is much more than just a socio-economic endeavour; it is a perception which models reality, a myth which comforts society, and a fantasy which unleashes passions.” (p. xvi)

To Sachs, not only has development achieved nothing, but there is also nothing intrinsically good about its aspirations. Rather it is a tool, a discourse, designed to make the world more manageable for the already powerful.

This is an interesting argument, yet it is wrong. Wrong because there is something intrinsically good to development.

Indeed my own error as I bounced around between Indonesian buses and English trains was to compare unrepresentative snapshots. A bus ride is not someone’s life. And what I didn’t see on those buses were the dirt floors of people’s houses, and the absence of running water. Nor did I feel the anguish of losing a child to Malaria, or the pangs of hunger at the end of the dry season, or the anxiety of living with only the barest social safety net. On the other hand, much of what London has to offer – comfort, food, the NHS – I have had all my life. So I took it for granted.

And when we move beyond backpackers’ experiences and look at representative data there are clear correlations between development and things that matter.

There is a strong correlation between material wealth and happiness, for example. As the chart below shows, the association weakens amongst wealthier countries, but for the world’s poorest countries it is clear. On average, living in a wealthier country will likely afford you a happier life. 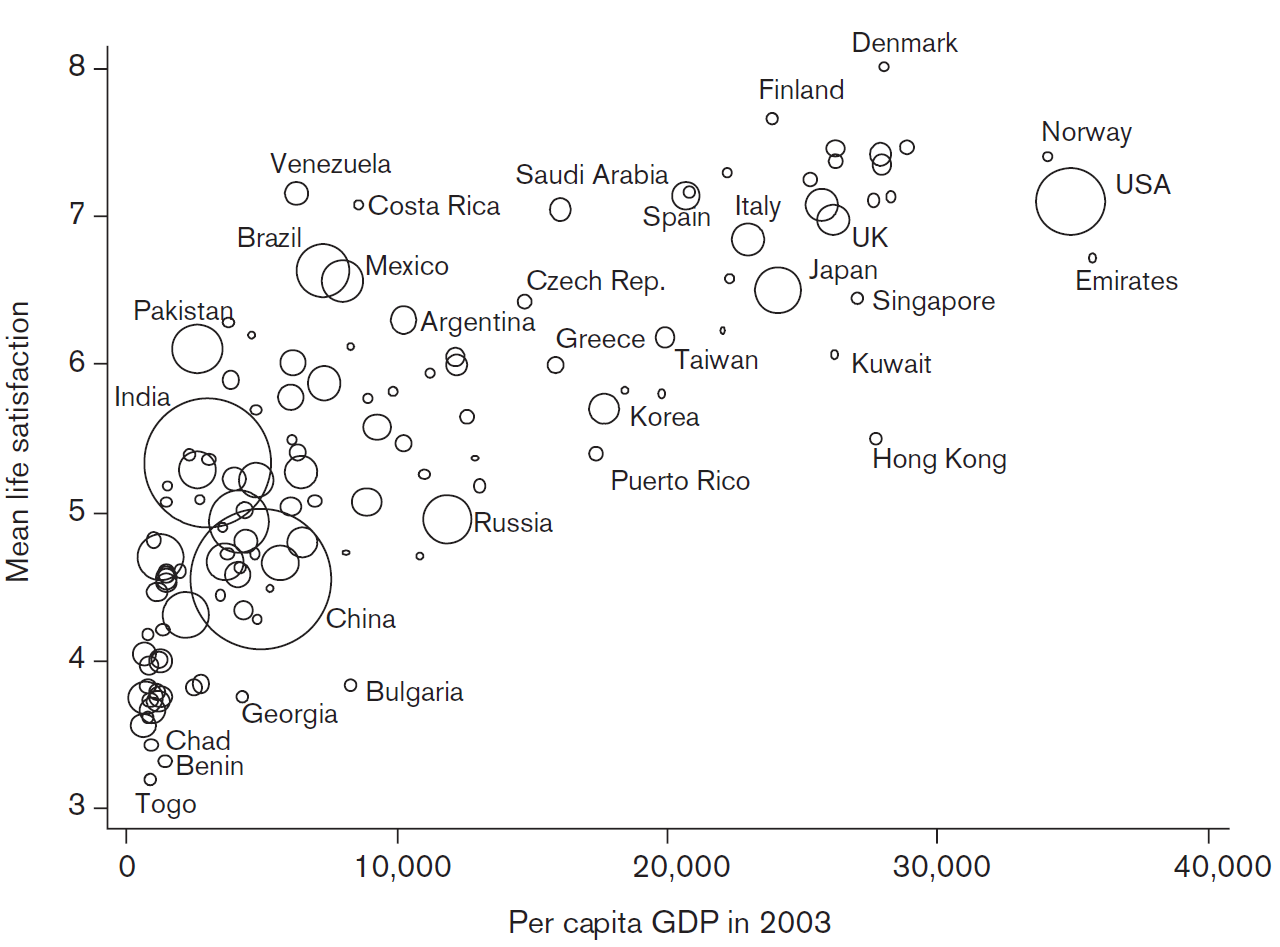 There is a similar correlation between wealth and life expectancy**. 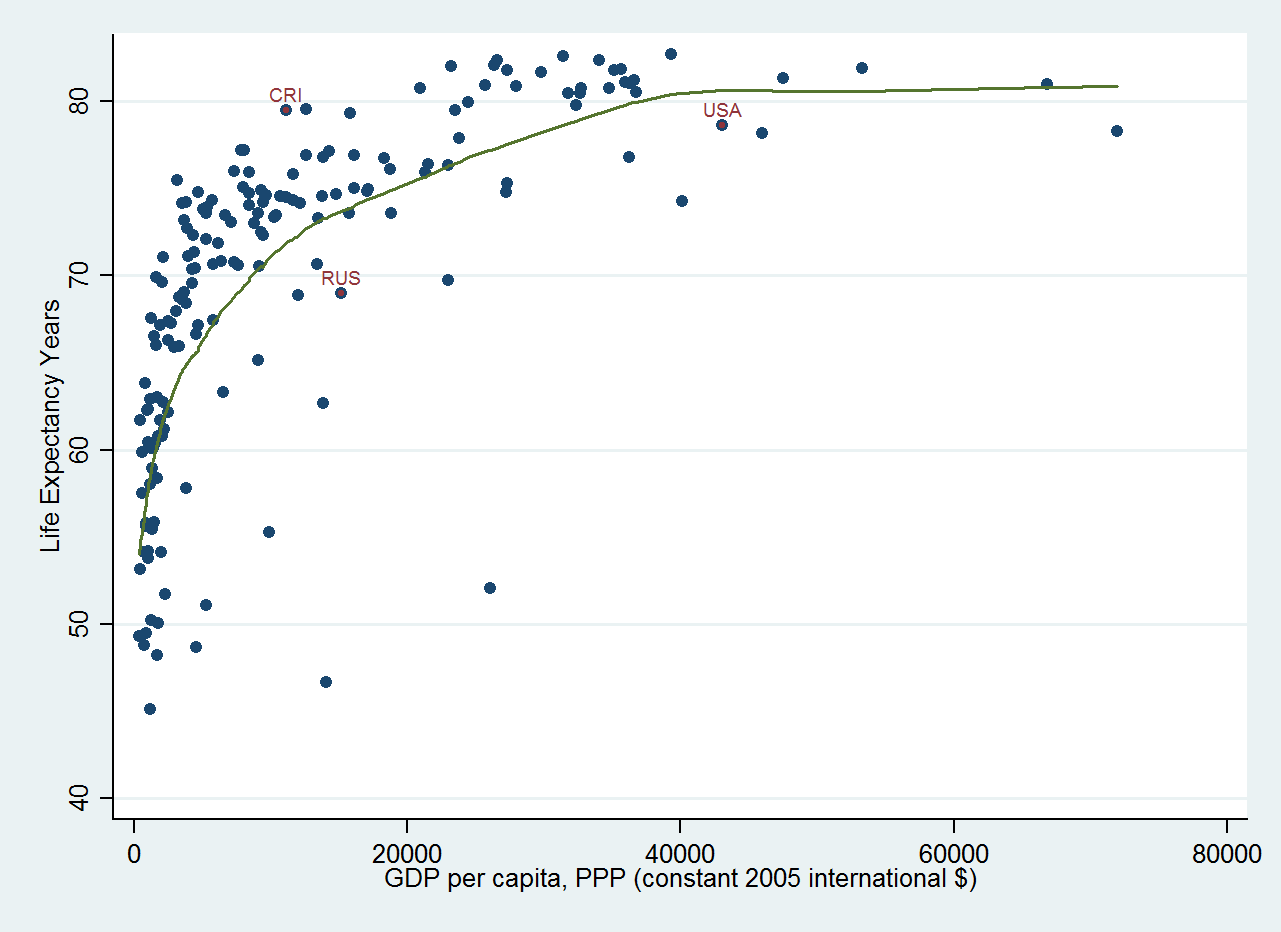 Equivalent relationships also exist across other key measures such as infant mortality, and sustained improvements in quality of life can be found across recent decades even in the World’s poorest countries. Over time, on average, development is bringing happier and healthier lives. It is mistaken to claim anything else.

Yet while development is unquestionably good, there are still many good questions to be asked of the development process. And while the critical theory of Sachs has little to offer, there is plenty of scope for critical thought about development.

Indeed, just as there are people who would have you think there is nothing good to development, there are those who would have you think there is nothing more to development than material wealth. They are also wrong. While, for example, there is a strong correlation between wealth and health it is far from perfect. Some countries afford their citizens relatively healthy lives despite being relatively poor, while other countries don’t do as well, despite being much wealthier. In the chart above I’ve highlighted three countries that illustrate this: the United States (USA); Russia (RUS); and Costa Rica (CRI). Despite being the poorest of the three, Costa Rica has the highest life expectancy. Wealth might bring better health on average, but amongst this average there is considerable room for social policy and societal arrangements to succeed or to fail in translating GDP into longer lives, and this is also true in other areas such as happiness. This is an area where we still have much to learn.

We also have much to learn about what actually brings development. There is no shortage of simple narratives: claims that more aid, or increased trade, or reduced corruption is all that is needed. Yet while aid, trade and improved governance may all help, the pathway to development is far from easy, or easily understood. China has prospered despite significant corruption, while the travails of Jeffrey Sachs’s Millennium Villages offer a lesson in how hard it can be to get aid right. And the complexity of trade’s contribution is illustrated well in this article by Dani Rodrik, Nancy Birdsall and Arvind Subramanian:

Witness the case of Mexico. It has the advantage of sharing a 2,000-mile border with the world’s greatest economic power. Since the North American Free Trade Agreement went into effect in 1994, the United States has given Mexican goods duty-free access to its markets, has made huge investments in the Mexican economy, and has continued to absorb millions of Mexican laborers… But since 1992, Mexico’s economy has grown at an annual average rate of barely more than one percent per capita. This figure is far less than the rates of the Asian growth superstars. It is also a fraction of Mexico’s own growth of 3.6 percent per year in the two decades that preceded its 1982 debt crisis.

And we still need, urgently, to learn how to make development sustainable. The chart below shows GNI per capita vs carbon dioxide emissions per capita, with each dot being a country. As Paul Krugman points out in this excellent review essay on the economics of climate change, there is a very real risk that the benefits of development will unravel amidst major climate change. And anyone who really cares about development needs also to care about solving this issue.

There is some cause for encouragement in the chart below. The spread of the dots out towards the right edge of the charts shows policy can help, some countries are already doing a much better job of making development sustainable. Yet as the massive problems that have bedevilled any serious action on climate change in Australia have shown, improvements are not politically easy. We need to understand better what we can change and how. 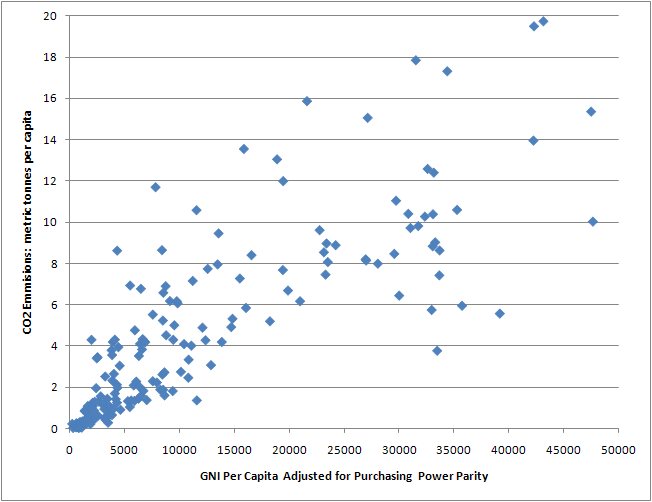 Chart source: page 9 of this report.

Development has brought much good. But we still have a long way to go in the task of sharing the benefits of development across our planet and doing so sustainably. And this leaves plenty of scope for critical thinking and questioning. Don’t question development, but do keep asking hard questions about it. We have a lot to learn.

*To be fair to post-development thinkers I should note that some of them have moved on somewhat from these earlier positions. For a good summary (from a post-development perspective see this, pay-walled, journal article).
** The observant reader will note that all I have shown here is a correlation. The chart alone does not provide evidence that more wealth causes better health. Yet, everything else being equal, it is likely that it does. Wealth brings resources for research and also the money to pay for medicines and health infrastructure amongst other things.