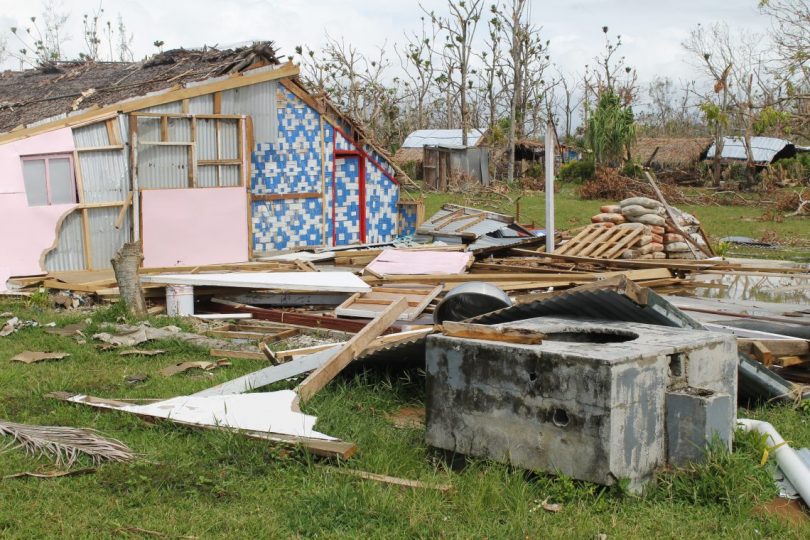 As named events, Pacific cyclones often have their own distinct personalities. Some become memories, others become mantras. The experiences of Tropical Cyclones (TC) Pam (Vanuatu, 2015), Winston (Fiji, 2016), Gita (Tonga, 2018), and now Harold (Vanuatu and to a lesser extent Solomon Islands, Tonga and Fiji, 2020) informed each other. ‘We will not be another Pam’ was the phrase repeated by Fijian authorities. Tongan authorities drew on the state-led response demonstrated by Fiji. In contrast to TC Pam, which became a by-word for the impact of full-scale international response in the Pacific, the Vanuatu government has prevented the arrival of international aid workers for TC Harold for fear of introducing COVID-19. This has led to a wave of interest in the implications of national isolation for the localisation of humanitarian assistance. There are strengths and limitations to Pacific localisation in practice, and this article draws on my experiences as an aid coordinator in the shelter sector in each of these responses.

TC Pam coincided with the Sendai conference on disaster risk reduction in Japan during a moment of heightened global awareness of disasters and climate change. Super Typhoon Haiyan in the Philippines had killed thousands and was a recent memory. This led to an unusually large humanitarian response scaled to Asian disaster contexts. UNDAC/UNOCHA teams were mobilised, all thirteen clusters within the humanitarian system were activated, as was the FRANZ Agreement. Military assets from no less than seven countries were made available to Vanuatu. This brought remarkable resources to the response but also raised questions of appropriateness and scale. ‘One size doesn’t fit all’ was the title of a review commissioned by aid agencies CARE, Oxfam, Save the Children and World Vision. As one person in Vanuatu’s National Disaster Management Office (NDMO) told me when I asked how she was finding the strong international military presence, ‘in a couple of weeks the men in green will have left and things will be back to normal’. For Pacific governments and development commentators, TC Pam has often been seen as the model of externally imposed aid. Resources made available in the TC Pam response did, however, expedite the relief phase and ensured that funding was available to support recovery. In the shelter sector, significant work went into supporting processes of locally driven house reconstruction, including support for Vanuatu’s remarkable but slowly disappearing vernacular building techniques. Subsequent cyclone responses have been different.

Responding to TC Winston, Fiji’s authorities had identified the lessons of Pam and wanted a strongly government-led response. Civilian structures that had been in place during the preparedness phase were pushed aside following a State of Emergency declaration. Civil society organisations, international NGOs and the UN’s regional presence in Suva were marginalised. The response won plaudits overseas and was an opportunity to renew diplomatic friendship after years of sanctions following the Bainimarama coup in 2000. However, military actors did not have the reach and community influence of civilian response agencies. Lack of government support for the UN’s revenue raising processes ensured that only one third of the required response funding was raised. Nonetheless, a major innovation was the use of cash-based assistance to support housing recovery. Aid agencies adapted by working alongside line ministries to develop a nationwide education campaign to support good building practice.

TC Gita in Tonga drew on both Pam and Winston. The Tongan government echoed Fiji’s sovereign amour propre. Tonga, also, would ‘not be another Pam’ and followed Suva’s lead in developing a cash-based housing recovery program. International assistance was kept to a minimum and aid workers remained in the background as advisors. Owing to Tonga’s conservative political culture in which women do not own land and thus don’t appear on lists of landed beneficiaries, international aid agencies working with local partners played a crucial role prioritising female-headed families for assistance. Responses in both Fiji and Tonga relied on the relative rise of the ‘local international’ agency: nationally-led chapters of international development federations that combined local connections with international resources and technical support.

A trend throughout the Pacific has been increasing government-to-government assistance as specialised Australian and New Zealand aid agencies made way for much-reduced programs that were integrated into foreign affairs departments. Governments themselves became humanitarian responders and prioritised high visibility military assistance. This has taken resources away from development agencies with long term connections with local civil society, community networks, and developmental approaches to assistance and recovery. Aid delivered in this form, rather than through NGOs, can give rise to the perception of institutional weakness, especially in countries where there is a recent colonial legacy. This is, in part, the source of part of the growing scepticism about international assistance from Pacific governments.

In Vanuatu once more, TC Harold provides the next iteration of response in the Pacific. A renewed sense of national control combined with COVID-19 means that international assistance is being held at arms’ length. The TC Harold response is nationally led with the NDMO and line ministries responsible for assessments, coordination, and the development of response plans. Provincial Emergency Operations Centres have played a leading role in identifying needs and coordinating local-level response. The few international agencies in the country play a key role in partnership with local actors, such as the Vanuatu Red Cross, community development and climate change committees (CDCCCs), and the Vanuatu Council of Churches to develop good community relations, priorities for assistance, and build a basis for longer term support beyond the emergency phase. When they occur, meetings are held in Bislama and there is a diversity of voices around the table, unlike TC Pam.

While the absence of international actors has been empowering in some ways, there are limitations to the effectiveness of this ‘forced localisation’. TC Harold is a major disaster in the Vanuatu context and the authorities and local civil society actors are stretched. As journalist Dan McGarry has noted on the Devpolicy Blog, the cyclone arrived as political factions worked to form a government following an election. A consequence of this has been an absence of a clear national vision or coordination system for the response, impacting communication with international partners around needs, funding and resources at a time of national emergency. Five weeks after the event, relief has been slow to arrive. The Shelter Cluster estimates that only 13 per cent of families in need of emergency shelter assistance have received it, leaving many in a few overcrowded houses, in evacuation centres, or simply sleeping outside. A rapid assessment process a month after the cyclone returned almost no useable data. Lack of clarity around importation rules, tax exemptions, and quarantine procedures have substantially delayed emergency distributions. Relief items consigned to national authorities may simply be accumulating in a warehouse in Port Vila. As TC Harold quickly slips off the agenda and out of already minimal news coverage, there will be fewer resources to support communities with post-cyclone recovery, undermining the already weak humanitarian-development nexus.

In each Pacific response there has been a re-negotiation of what localisation means. A history of government-to-government assistance has over time reinforced state-led rather than civil-society led responses. Sadly, a diminishing international NGO presence is now reducing rather than enhancing the scope for local civil society engagement in Pacific disaster response. There are other challenges. States can be authoritarian or have areas of blindness, local civil society actors can easily be marginalised without international partnerships, and national actors with limited resources may find their capacities overwhelmed. In all cyclone responses, the needs of Pacific urban communities were overlooked. Effective localisation is of central importance to the future of humanitarian action but will require sustained investment in deeper and longer-term partnerships between international and national response actors. Governments may not wish for another Pam, but can communities afford another Harold?

Tom Bamforth is a writer and aid worker. His recent book is The Rising Tide: among the islands and atolls of the Pacific Ocean.