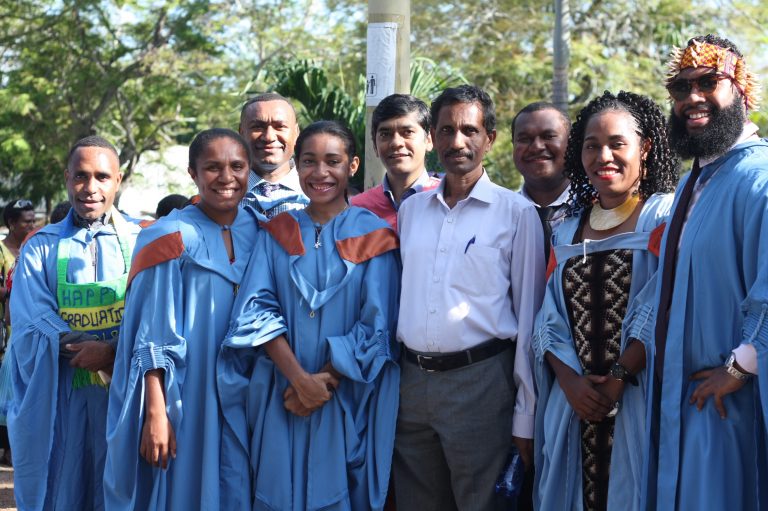 According to BPNG data, there have been four years of decline in formal employment in PNG since 2013. Getting a first job is always hard, and a tough economic climate makes it even harder. This blog looks at the results of the latest of two surveys of the University of PNG (UPNG) economics class of 2015. The first survey was conducted at the end of their final semester of classes and asked questions about their experience at UPNG and the desires for future work. The results of this survey were written up as a Development Policy Centre discussion paper (read the blog on the paper here). This second survey, conducted in 2017, looked at the job-seeking process and employment outcomes. Despite the economic climate, results from the cohort are generally strong, with the majority of graduates finding good positions within one year of graduating.

Most graduates who answered the survey were employed in the formal sector. Of those, most graduates were employed in the private sector. This is despite 58% of graduates indicating in the prior 2015 survey that they sought careers in the public sector, and only 20% indicating a preference for the private sector. This could be partially reflective of the government salary and hiring freezes that hit just before these students graduated. Nonetheless, all of the employers listed were high-profile, large organisations with strong reputations. 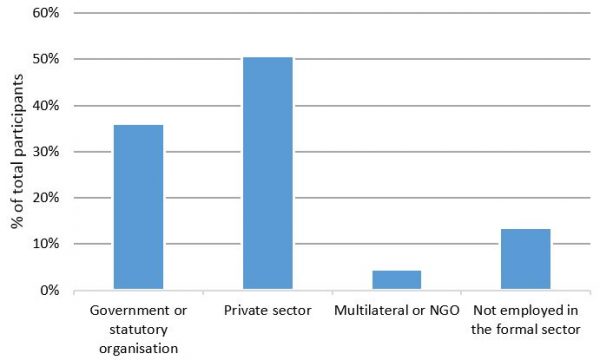 Those graduates not employed in the formal sector were either undertaking training, engaged in village duties, or working in the informal sector.

Cumulative distribution of formal employment over time, % of total participants 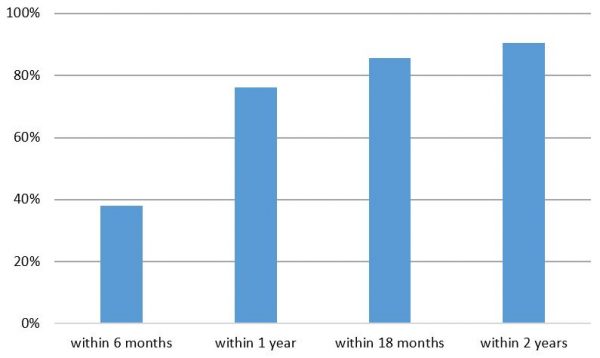 The majority secured their job through a written application, while the rest were referred by various contacts, wantoks (relatives and friends), lecturers, or HR firms. All following graphs report percentages of the total number of participants successful in gaining employment. 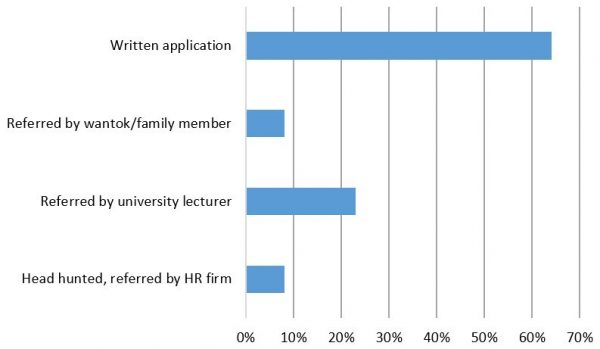 Of those who secured a position, the vast majority submitted 5 or less applications for jobs before they were offered their current job. This is an interesting statistic even once you take in to account that this survey may be skewed towards more successful candidates, as we may have expected that with the majority of participants still waiting to hear back from jobs at six months, most may have submitted a higher number of applications.

Possible reasons are that due to the economic downturn, far fewer graduate jobs were advertised; that graduates were only aware of a small number of advertised positions and only aware of a few of the major employers to submit applications; or that many only wanted to apply to larger, recognisable organisations. 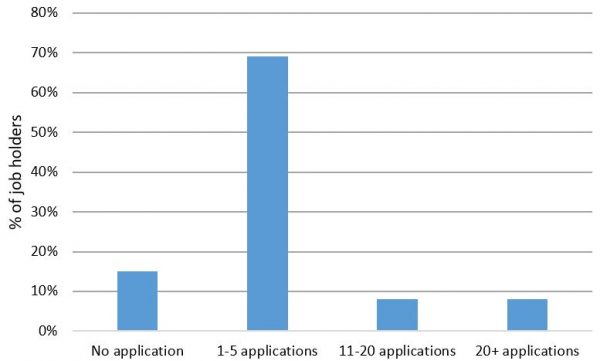 Notably, not all jobs related to economics. Participants were asked whether the job that they do involved aspects of economics, public administration, banking/finance, sales/marketing or other. Participants were allowed to check more than one job type in answer to this question. This means that we can infer that 38% of participants, assuming they understood the question correctly, felt that their job did not involve economics at all. This is quite a large percentage, especially if this sample over-represents candidates with successful careers. 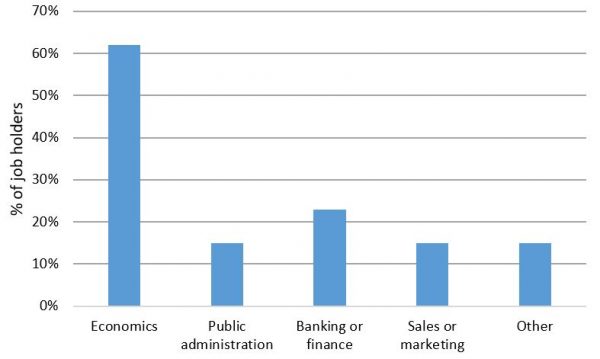 To find out how graduates spent their time at work, and what kind of work they do day-to-day, participants were asked to rate several actions on a scale of one to five, where one is never, three is once a week and five is every day. One notable result is the relatively high rate of Excel use, with participants across the board on average saying they use Excel between two to three times per week.

Skills that graduates use most often at work, average score across all participants (1=never, 3=once per week, 5=every day) 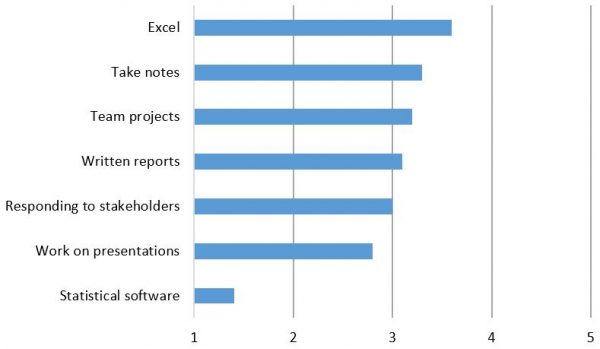 Graduates were also asked what courses that they studied at UPNG were the most relevant to their current job. The highest ranked course by broad applicability on average was statistics, while the lower ranked courses were much more specialised – like agricultural economics and environmental economics. These courses may be useful to a small number of specialised workplaces. 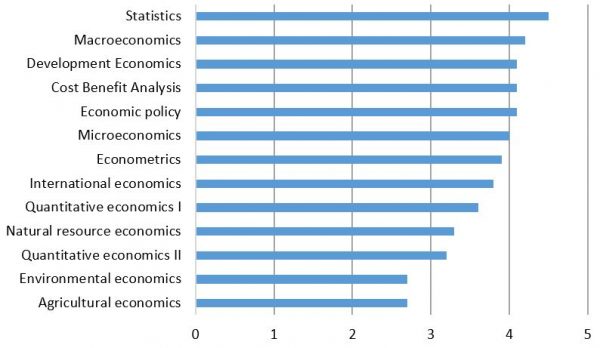 Students were asked free-response questions about their current role, and what changes, in hindsight, they would like to see in the economics curriculum at UPNG. In these responses, the students related their experiences of the difficulty of finding economics-related jobs in PNG. Six key themes arose around skill improvement, these responses are outlined below. 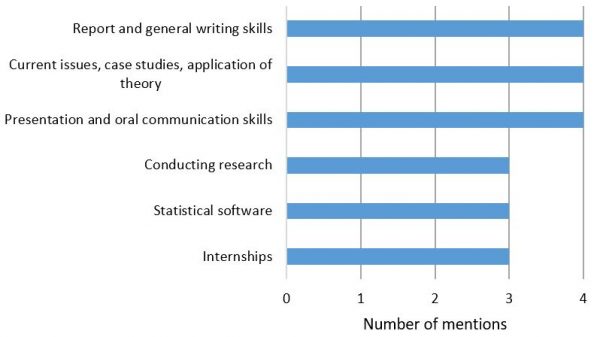 Overall, the survey provides useful information to ponder. Employment results are, as far as we can tell, positive. Despite harsh economic conditions, the majority of graduates found jobs within one year of graduation. These graduates are arguably some of the most employable entrants into the workforce in PNG, so we would hope that the results are strong. There is also valuable information about the type of jobs and sectors in which the graduates find work, their opinions of the work they do, and what they think the most relevant coursework is.

The participants in the survey are all UPNG economics graduates, so insights from this survey relate to this program at UPNG, its current, former, and future students and staff. However the results may have some broader interest too, including for any university-educated job seekers, as well as employers, government, education professionals or those implementing aid or employment programs in PNG.

Rohan Fox
Rohan Fox is a Research Officer at the Development Policy Centre and holds a Masters in International & Development Economics from ANU. He was formerly a lecturer in economics at the University of Papua New Guinea.