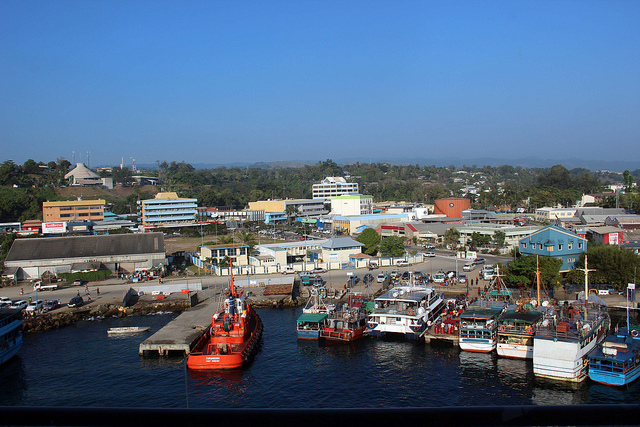 Urbanisation rates are rapidly rising in Melanesia (Keen and Barbara 2015) as a growing number vote with their feet and move to cities in search of a better standard of living. Despite growing pressures on urban housing, services and infrastructure, political pressure for better urban management and investment remains muted, allowing unresponsive local and national governments to persist (Connell 2011). The result is too little investment in Pacific cities given their strong role as drivers of development. This post considers why the rapid growth of cities is failing to translate into greater political pressure for urban investment and more equitable representation.

Politics in Melanesian cities is being constrained by a number of factors which make it hard for urban dwellers to put their issues on the policy agenda. Electorally, a rural bias exists in many Melanesian countries with efforts to ensure broad provincial representation coming at the expense of urban representation. In Solomon Islands, about 15 per cent of the population lives in the capital, Honiara, but is represented by only 3 of 50 national representatives (Craig and Porter 2014 [pdf]). So most national political leaders direct resources to regional electorates, pursue regional development and growth centres, or push to devolve power to the provincial level where their power base resides.

Overwhelmingly, the dominant political discourse in Melanesia is one of decentralisation and of spreading public expenditure equally around the nation despite the very uneven distribution of the population and variable contributions to national development, service delivery and productivity. Idealised notions of traditional ‘grassroots’ communities as the immutable bedrock of Melanesian society (Cox 2014) allow misconceptions to persist of urbanisation as antithetical to national interests. The dominance of rural interests is reinforced by the rise of constituency funds in Melanesia which are allocated on an electorate, rather than per capita, basis and therefore channel resources away from urban population centres, reducing funding for municipal and provincial governments (Batley 2015).

The dearth of widespread urban political activism also reflects the fragmented nature of urban communities which struggle to recognise collective interests because of poor connectivity (many settlements have limited internet and few cheap and quick transport options to the city), narrow social networks split by ethnic and income divisions, and limited understanding of political processes and legal rights. Urban ethnic diversity and lingering concerns about outsiders accessing customary land adds to the lack of urban cohesiveness. Ethnic groups are largely concentrated in their own settlements which works against a knitting together of the social and political fabric of the city.

Collective action is also limited by the dispersed nature of economic activity in Melanesia with its low levels of industrialisation in cities and high dependence on resource exploitation and subsistence agriculture which are scattered about the country. Only about 20 per cent of Melanesian populations are urban. The contribution of urban spaces to the nation’s economic vitality is significant, but largely based on small or foreign businesses that don’t lend themselves to organised labour.

Urban political institutions such as municipal councils are responsible for driving urban development but lack authority and resources to strategically manage urbanisation. Lacking credibility and capability, municipal governments are unable to provide adequate urban services and support investments in urban infrastructure. This further undermines their legitimacy as a relevant tier of government and forces urban communities to look elsewhere for support (donors, non-government organisations, professional associations and private provision).

Melanesian cities thus find themselves in a paradoxical situation. They are increasingly driving growth as the hub of the nation with the major transport, service and government facilities, and are housing more of the nation’s population, but have little political voice and few avenues to exercise political demands to improve urban environments. This dynamic raises important questions about whether change is possible given the sociopolitical context.

There is presently little evidence of an urban consciousness that could underpin an urban-focused political movement in Melanesia. The urban middle class is very small, economically dependent on the state, and generally implicated in rural-focused patronage politics (Barbara et al. 2015). There are individual examples of urban activism, but these tend to be focused on very specific issues and disconnected from any social or political movement able to put urban issues firmly on the political agenda. For example, the Young Women’s Parliamentary Group in Solomon Islands has had some success in highlighting the need for improved urban transport (Spark 2014), but political commitment to improving transport services has received little support at the bureaucratic level. Similarly, the growing cohort of tertiary-educated urbanites capable of political organisation may be urbane but most lack a strong commitment to urban politics.

There are few entry points for donors and activists seeking to energise urban politics, but there are some positive examples on which to build. Innovation in the city is happening at the local level where communities like Panatina Valley in Honiara have self-organised to improve drainage, public facilities and employment, and to access government and non-government resources — setting an example for others. Urban services, including electricity, water and ports, are slowly improving as a result of donor-led sectoral changes in legislative frameworks and management. Urban security is boosted by new models of networked policing linking police forces, community chiefs and private providers. These are valuable flagships that can provide strong demonstration effects; the approach is opportunistic but lays the footings for political and policy change.

Other catalysts for action may emerge if we were not flying so blind with little basic information about urban growth rates, public priorities, environmental hazards and health risks. Knowledge is power and those committed to change such as urban planners, business people and activists have a very weak evidence base on which to generate public interest, pressure and policy initiatives. In Suva, evidence of heavy metal leachates from the city’s Lami Dump into urban coastal areas used for aquatic gleaning was a key factor in attracting donor investment and public pressure for better waste management. Similarly, the recent and severe impacts on the cities of Port Vila and Honiara following extreme weather events have provided the evidence of vulnerability and the political impetus to drive policy and practical urban planning and disaster preparedness actions.

Politics are dynamic, but at present the most productive approach to progress urban issues is likely to involve focusing on bottom-up and sectoral initiatives as political opportunities and evidence of high returns arise. Over time, such efforts may support the emergence of a constituency inclined to organise politically to demand additional gains for urban environments and investments. At that stage, a more integrated approach to urban management may be possible.

Julien Barbara and Meg Keen are senior policy fellows with the State, Society and Governance in Melanesia (SSGM) program at ANU. This post was originally published as SSGM In Brief 2016/9.