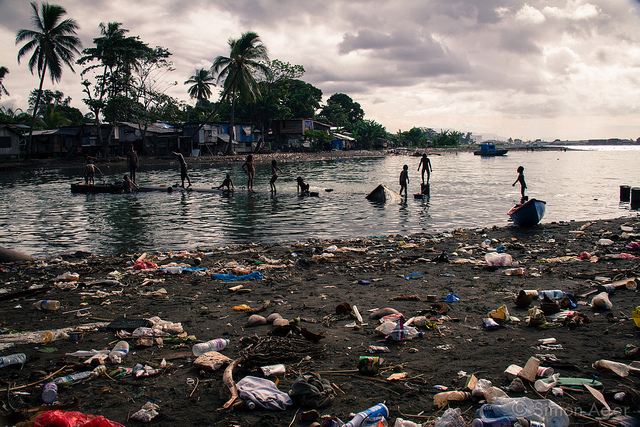 Pacific island countries are rapidly urbanising. In nearly every country in the South Pacific, the urban growth rate exceeds the national population growth rate (Figure 1). As a result, the urban population will double within the next 25 years. In Melanesian countries, urban growth is particularly high. Most striking is Solomon Islands; its urban population is increasing at about 4.4 per cent, almost twice the rate of national population growth — at this rate urban inhabitants will double in less than 17 years. Papua New Guinea (PNG) faces similar pressures; its urban population is expected to double by 2030, reaching about 2 million [p. 84; pdf]. Without adequate urban policies, planning and services, rapid urban expansion can hinder economic growth. 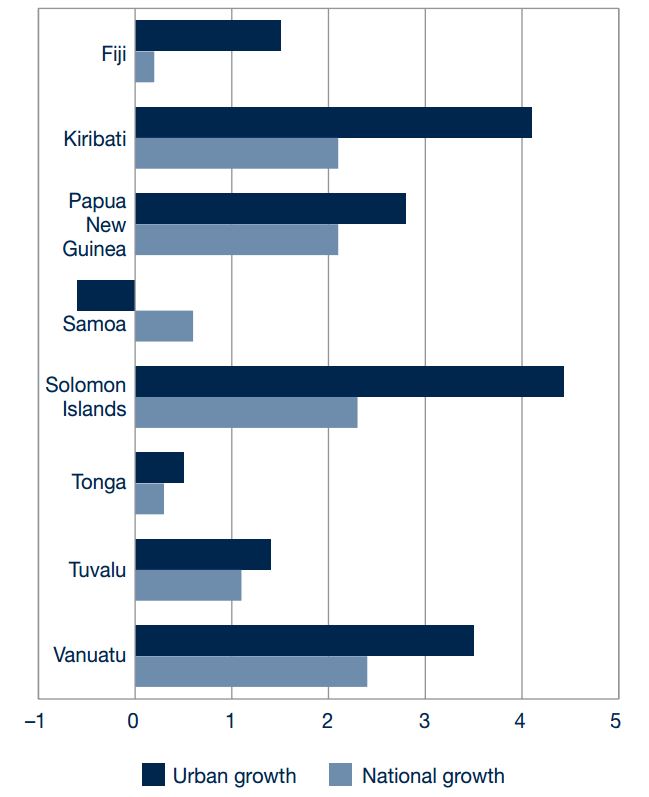 Note: Statistics in the South Pacific are variable in quality. The growth rates should be interpreted as indicative of relative relationships. Sources: Jones (2012) [pdf], SPC (2012), UNFPA (2014) [pdf]

Throughout the Pacific islands, urban planning and management remain largely neglected. A few Pacific island countries, like PNG, have tried to better manage urban pressures, but implementation of initiatives has been patchy at best; for example, there has been little action [pdf] on the 2010 PNG National Urbanisation Plan. While donors recognise urban centres as major drivers of economic growth, few Pacific leaders have come to terms with the reality of an urban Pacific and the need to manage cities. This post examines some of the key urban challenges in the Pacific islands, and some promising innovations.

Throughout Melanesia, increasing urban populations are leading to sprawling settlements — many unserviced, adding to social, health and economic woes. To imagine the living conditions, consider that several urban settlements, including in Vanuatu, Kiribati and Marshall Islands, exceed the population density of megacities like Hong Kong and Singapore with a fraction of the services and no comparable high rise apartments. It’s no wonder that urban poverty is rising, with associated health and social issues. For example, Port Moresby has the highest concentration of tuberculosis (25 per cent of cases) in the country (John 2015).

Political engagement with urbanisation issues has been lacking, despite increasing pressures on urban health, land and housing. There are few forums to facilitate public consultation, and few members of parliament representing urban interests, despite the rising numbers in urban electorates. Popular media, when it addresses urban issues at all, is nearly uniformly negative. Only Fiji, Samoa and PNG have government ministries dedicated to better housing and urban development; even so, progress has been slow. Donor aid programs are largely lacking and, where they exist, are rarely sustained or strategic.

With patchy services and few social safety nets, kinship systems are vital to urban dwellers struggling to meet their basic needs. Settlements in Port Moresby and elsewhere in Melanesia have been referred to as ‘city villages’ with order maintained largely through custom or informal governance systems. Many urban settlements are without services or basic infrastructure. Linkages to villages are fading as new generations grow up in settlements. Urban-based informal safety nets are being stretched as costs of living escalate, and many struggle to gain steady wage employment.

Against this backdrop of urban woes, small changes are occurring. Advances in mobile phone technology, more accessible finances, and road and sea transport gains are creating stronger urban–rural linkages. Better connectivity between rural and urban areas underpins new economic activities, including more urban services, goods and markets, and financial transfers between urban and rural areas in times of need. For example, urban–rural remittances were significant during the last PNG drought in 1997–98, increasing by about US$7.8 million compared to remittances before the drought (Mike Bourke pers. comm. 6/11/2015); and urban youth and new migrants are often supported by their rural families to achieve education and economic goals.

Urban markets are increasingly important to rural and urban livelihoods, serving as financial transfer mechanisms, reaching back to peri-urban and rural areas. New initiatives are boosting economic prospects for some, including safer transport via women-only public buses in Port Moresby, and upgrades to markets. The more value chains can be extended, forward and backward in the economy, the more robust economic systems will be.

Investment in urban infrastructure remains inadequate, but is increasing in recognition of its importance to economic growth and development. Over AU$300 million has been invested in Lae for road infrastructure over the past five years; the Lae Chamber of Commerce believes this could boost growth, assuming the roads are maintained — seldom achieved in Pacific island cities. State-owned enterprises remain weakly managed in the Pacific islands, but in some countries like Solomon Islands, corporatisation of selected utilities and telecommunications has extended coverage and added to efficiency.

As cities grow, they can contribute to a more diversified and service-oriented economy — more than 50 per cent of GDP is generated from urban areas in Fiji, Kiribati and Samoa: transport, information technology (IT) and other small- and medium-scale enterprises are increasing. Partnerships between government and the private sector are also opening up opportunities, such as government–bank partnerships to increase access to finances, and partnerships between regional businesses and urban educational institutions, like Lae UniTech in PNG, to enhance IT access and work experience. Most innovations are ad hoc and in the pilot phase, but they are setting templates for the future.

More job opportunities and services in comparison to rural areas create a strong social pull to cities, so the rapid rise of migrants will continue. Urban issues need more attention now if the Pacific islands are to avoid urban degradation and social tensions. With strategic and greater investment in urban areas — especially in governance, housing, infrastructure and livelihoods — there is scope to enhance development opportunities, reaching far beyond city boundaries. Unfortunately, funding and planning have been grossly lacking. Basic statistics on households, rural–urban linkages and demographics are patchy, hindering action on an issue that will affect national development.

Because urban issues are cross-cutting they can fit easily into existing aid programs, if there is the political will. For example, the Australian aid program in the Pacific has six priority areas — education and health, effective governance, infrastructure, agriculture/fisheries/water, gender equity and building resilience — all relevant to urban development. Strong and long-term partnerships would help — with donors, but also between local-level governments. Donors intermittently support urban issues, mostly in the form of project aid, but efforts are rarely sustained or extended to include maintenance plans, public engagement and governance structures. Better urban management could make a big contribution to achieving economic growth and national stability.

Meg Keen and Julien Barbara are senior policy fellows with the State, Society and Governance in Melanesia (SSGM) program at ANU. This post was originally published as SSGM In Brief 2015/64.