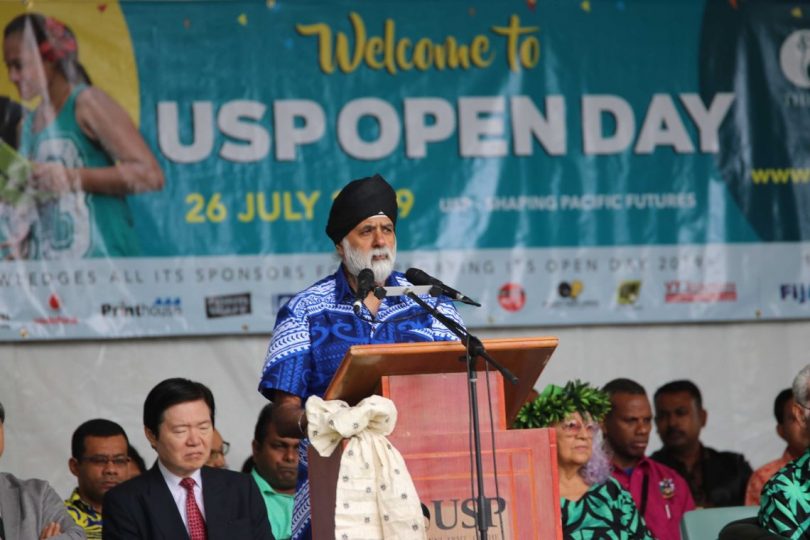 The whistleblowing Vice Chancellor at the University of the South Pacific (USP), Professor Pal Ahluwalia, has described the illegal deportation of he and his wife, Sandra Price, last Wednesday as a ‘surreal’ experience. Many would agree that the inhumane, immoral and illegal deportation has plunged the tertiary institution into the biggest crisis of its 50-plus-year history. The ensuing standoff between USP host country Fiji and the university governing body, the USP Council, has put the institution’s funding at risk, and its future in jeopardy.

In another surreal episode, Fiji’s Prime Minister and Immigration Minister, Frank Bainimarama, chose to airily downplay the situation, apparently hoping that the controversy would blow away. After initially going to ground in the face of the international and national uproar created by the expulsion, Bainimarama responded with a tweet – concentrating on things that matter – insinuating that the crisis engulfing the region’s once premier tertiary institute was of little, if any, consequence.

Bainimarama’s right-hand man, Attorney General Aiyaz Sayed-Khaiyum, followed suit by telling The Fiji Times that there is ‘no saga’ and ‘no crisis’ at USP. Since last year Khaiyum, as the economy minister, withheld Fiji’s $27 million allocation to USP over alleged unresolved governance issues. It came after a failed attempt by the Fiji Government’s USP representative to suspend Ahluwalia.

The statements by these two men, who virtually run the country, reflect a total disregard for the consequences of their actions. Besides the international furore, they seem unconcerned about the political fallout domestically, despite winning the 2018 election by the thinnest of margins with another election just around the corner in 2022. Their growing arrogance is clearly a consequence of military support and the censorship of the media, which means the government maintains a firm grip on the country. Hiding behind the facade of a democracy is very much a military government. This is reflected in the despotic actions of both the Prime Minister and his Attorney General, who clearly feel that they can act with impunity, without suffering any consequences.

Then more surreality: when the USP issue was raised in Fiji’s parliament this week, it was ruled out by the Speaker on the grounds that it was not a matter of national importance. Even though Fiji has the most students at USP, and never fails to point out that it contributes more funds to the institution than any other government. This week the education minister claimed that Fiji does not interfere in the decisions of the USP Council, even though it just did: by withdrawing the VC’s work visa the government voided his contract.

Various independent commentators have pointed out that the scale of the damage to USP is enormous and unprecedented, and raises serious questions about the broader, longer-term impacts on regional unity, academic freedom, respect for human rights and the rule of law.

The deportation has also seen the resurfacing of questions about Fiji’s suitability as the host nation for USP due to political instability and the lack of civil rights. Samoa has already put itself forward as an alternative host for the university.

The manner in which the Ahluwalias were deported has been well-covered by the media. It was not only legally questionable, but morally wrong. Up to 15 police and immigration officers descended on the couple’s accommodation in the dead of the night, demanding to be let in on the threat of breaking the door down. The VC and his wife were then whisked away to the Nadi International Airport at high speed, without so much of a toilet break, let alone due process.

Few believe the official reason offered for the deportation — that Ahluwalia’s conduct was ‘prejudicial to peace, defence, public safety, public order, public morality, public health, security, or good government of the Fiji islands’. Many feel that Ahluwalia has had a target on his back since his exposure of financial mismanagement under the previous Vice Chancellor, Professor Rajesh Chandra, who was seen to be close to the government. The losses ran into the millions of dollars, as articulated in the BDO special audit report, which was leaked to the media, much to the embarrassment and the consternation of the government, the chairman of the USP Council and those implicated in the scandal.

The situation is replete with ironies. Bainimarama used the mantra of a ‘clean up’ against corruption to justify his 2006 coup but is now increasingly linked to this cover up at USP. Considering the importance of higher education in the region, and the cost to its own domestic and international reputation, the lengths to which the Fiji government has gone to get rid of Ahluwalia reveal a government that has completely lost the plot.

Unions, civil society organisations and opposition parties have roundly condemned the expulsion, but there is an uncanny silence from the office of the Fiji Human Rights Commissioner, Ashwin Raj, an appointee of the Attorney General.

Also deafening is the silence from the USP’s major donors, Australia and New Zealand, the paragons of human rights and democracy in the region. Their statements have merely expressed concern about USP, while failing to condemn the treatment of the VC.

As recently as June 2020, on this very blog, I wrote about regional institutions with governance problems, including specifically USP, and the silence of international aid donors and partner countries. I attributed these countries’ silence to political expediency and geopolitical priorities, warning that unless we demand high standards, and adopt zero tolerance for graft and abuse, we only embolden the perpetrators.

I called for a change of attitude, but to no avail, as this latest USP scandal indicates. Do Australia and New Zealand still stand for the rule of the law and human rights, or have they surrendered these values for the sake of political expediency?

The only fair outcome in this case, and the only one that would protect the viability of USP, would be the reinstatement of Ahluwalia. This will only happen if the USP Council stands its ground, and if Australia and New Zealand, as USP’s largest donors, put the university first. This should not be too much to ask, or to hope.