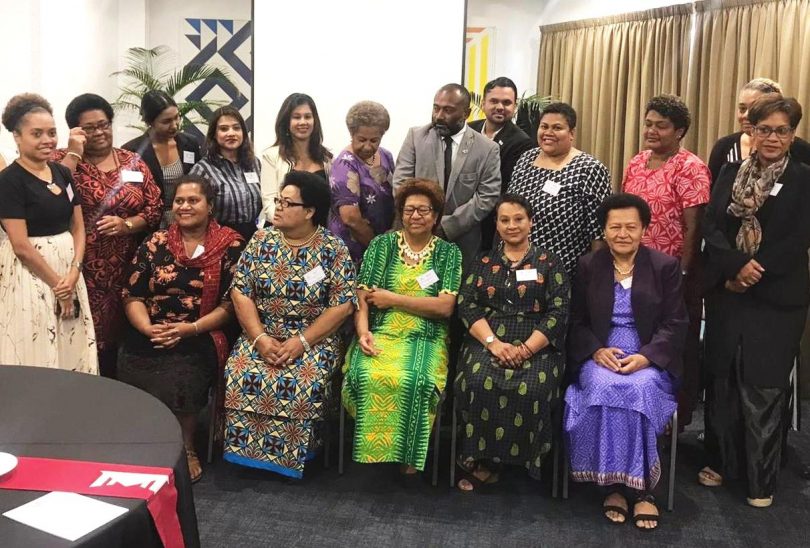 Women leaders speak out on violence against women in politics at a workshop in Fiji, March 2021 (Farisha Nigar, NDI)

As with their sisters around the world, many women in the Pacific Islands are victims of violence. While much of this violence occurs within the family, a socio-cultural environment accustomed to violence against women has repercussions for women’s participation in public life, particularly in politics. At times, police are not the solution but rather the perpetrators of violence against women. Civil society has been speaking up against the lack of support from law enforcement authorities and the common practice of police officers pushing women victims of domestic violence to reconcile with the perpetrators.

To explore structural and socio-cultural barriers to political participation and the nature and perpetrators of violence against women in politics, the National Democratic Institute with support from femLINKpacific conducted qualitative research in Fiji, Papua New Guinea (PNG) and Solomon Islands and made recommendations to address the issues that affect politically engaged women.

Female politicians interviewed for this research have all experienced first-hand, or witnessed, acts of violence against women engaged in political activities. While physical assault is less common, many politically active women are victims of character assassination and libellous accusations. Fear of being ostracised or viewed as a ‘victim’, and a lack of faith in the justice system, prevent women from reporting violence against them. Several female participants suggested that since violence against women in politics is a large part of their culture, it is an expected price they pay to engage in politics. Although all three countries included in this research have legal provisions outlawing violence against women, and many institutions have policies to regulate behaviour among members, participants noted that institutional mechanisms to prevent gender-based violence are inadequate or not appropriately enforced.

Violence against women in politics is a troubling type of violence, particularly as it compounds traditional political violence – defined as the use of force and intimidation against political opponents – and gender-based violence used to silence women’s voices. The issue has many expressions but the same purpose: to keep women disempowered and away from politics.

Across the world, attacks against women in politics, including character assassination, tend to be extremely personal and often of a sexual nature. Having engaged in politics myself in the past, I can relate to the women politicians in the Pacific Islands who shared experiences of intimidation and defamation, that hurt not only themselves but also their families and friends. 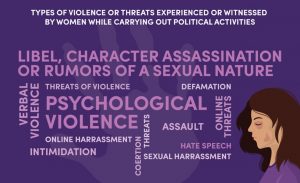 Findings from the National Democratic Institute research on violence against women in politics in Fiji, PNG and Solomon Islands

In small communities where strong clan ties and a culture of shame prevail, rumours of a sexual nature – often portrayed as ‘gossip’ – can be devastating. Furthermore, the ever-present social media has become the breeding environment for pervasive misogyny, hate speech and psychological violence, shattering women’s political ambitions, participation, and overall expression.

Since a major intention of violence against women is to deter them from going into politics and minimise their chances of being elected, it is not surprising that most attacks against women politicians seem to occur during election contests – either when the woman seeks nomination within her party or during the election campaign itself.

For some women politicians, dealing with violence is the implicit cost of their political engagement. As a female leader in Bougainville described it, “this is part of politics, so I cannot report this kind of verbal intimidation, but I can grow from it and encourage others in the future”.

Fiji and PNG are gearing up for important general elections slated for 2022, an opportunity to strengthen these countries’ democratic processes by ensuring fair and inclusive elections.

In PNG, despite proven skills and tenacity in leading peace building, service delivery and social change in their country, gaining access to political power and decision-making positions at all levels of the government remains a distant goal for women.

Insights from Fijian and Solomon Islands women politicians elected to public office show that there is still a need across the region to continue to normalise women’s presence in political decision-making positions, denounce defamation attacks, and make a common front against misogyny.

According to women participating in this research, perpetrators of violence against them were often either members of their own political party or supporters of other parties – both men and women. Ahead of the next elections, political parties in Fiji and PNG should review intra-party codes of conduct to create an atmosphere of trust and encouragement for victims to come forward. Parties can consider sanctions and dismissal for members who engage in any form of harassment, bullying or violence.

You can access #NotTheCost: Qualitative research report on violence against women in politics in Fiji, Papua New Guinea, and Solomon Islands here.

The research discussed in this post was funded by the United States Agency for International Development (USAID). The opinions expressed are those of the author.

Ancuţa Hansen is the National Democratic Institute Director for the Pacific Islands. She was a political organiser, election candidate, and elected official in her home country, Romania.