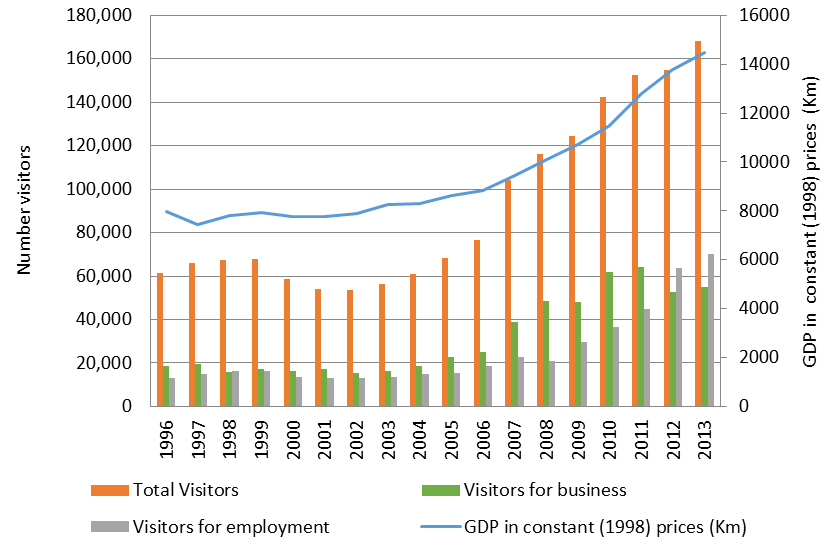 This is the second of a series of posts analysing arrival and departure data in Papua New Guinea based on annual statistics released by PNG’s National Statistics Office (NSO) and summarising data recorded on Arrival and Departure Cards.

From this current post onwards the focus is on the category of visitors / temporary entrants (‘visitors’), which refers to persons entering PNG who are not residents. Foreign nationals residing in PNG for a certain amount of time who leave temporarily and then re-enter the country are counted as ‘returning residents’, and are therefore not included in the figures of visitors. They are only counted when they enter PNG for the first time. On the other hand, PNG nationals who, while residing abroad, return to PNG (for example, to visit their relatives), are included in the figures.

The number of visitors to PNG was 61,392 in 1996. It dipped to 53,762 in 2002 and has grown rapidly since, reaching 168,212 in 2013. Figure 1 shows this overall trend as well as the reasons for visitors arriving in PNG. The two major reasons for visits, which have contributed to the tripling of visitor numbers between 2002 and 2013, are ‘business’ and ‘employment’. The number of visitors that have arrived for most other reasons has not changed as rapidly. The number of visitors entering PNG for the purpose of holidays, for instance, peaked in 2008 with 31,103 and has since oscillated around the 25,000 mark. (There will be a separate post on trends in tourism in this series.) 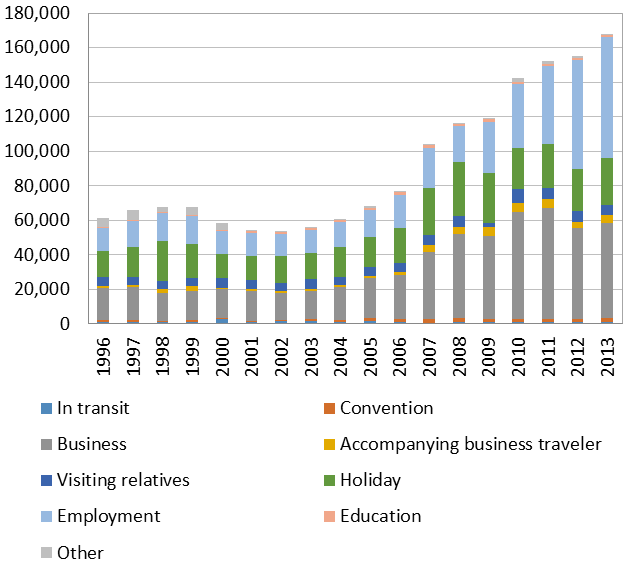 The number of visitors arriving for business purposes almost tripled from 18,682 in 1996 to 55,026 in 2013 (see Figure 2). The number of visitor arrivals for employment purposes increased even more dramatically, from 13,276 in 1996 to 70,008 in 2013: a more than five-fold increase. Except for a slight dip in 2008, employment has grown very rapidly as a reason for visitors arriving in PNG, especially in recent years (see Figure 2). Employment has become the most important reason for visitors arriving in PNG, overtaking business arrivals in 2012.

Figure 2: Visitors for employment and business reasons, and GDP

Figure 3: Visitors for employment and business reasons, and formal employment 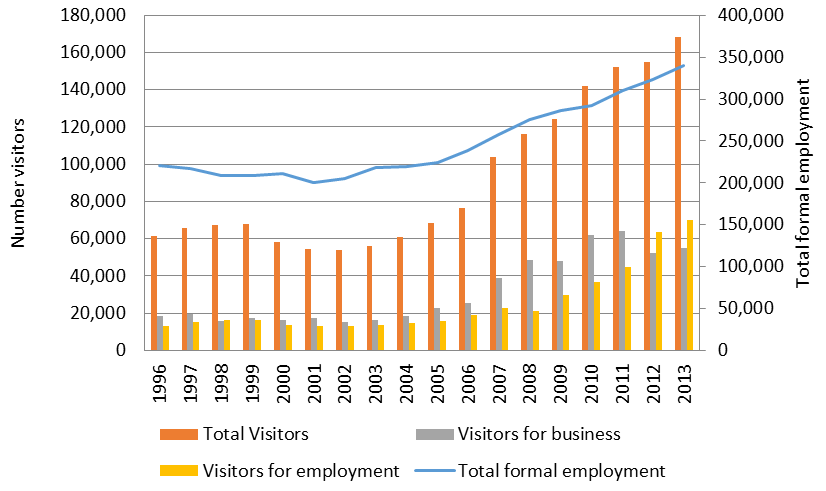 Note: Employment figures were made available by ADB in PNG. Data after 1998 is likely to underestimate private sector employment growth and, as such, also the total for formal employment.

Overall, the explosive growth in visitors arriving in PNG – a tripling of numbers over the last decade – has been closely linked to PNG’s expanding economy, based largely on its resources boom, and the associated growth of employment opportunities. It remains to be seen whether, with the end of the PNG LNG construction and lower commodity prices, we will see a slowdown in visitors to PNG, or if growth will remain strong.