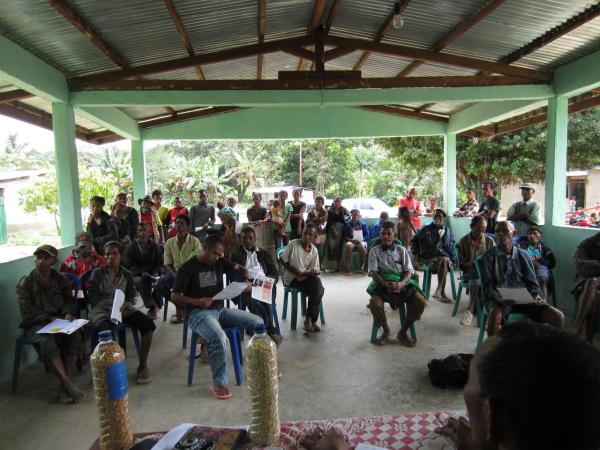 Last year one of us clattered down a long, bone-shuddering road to an isolated hamlet in Timor-Leste in order to conduct a focus group discussion of a donor-funded initiative. We arrived at about 11 o’clock in the morning and were met by what felt like half the community to share their (overwhelmingly favourable) impressions. After about an hour, the chief of the village started making theatrical coughing sounds reminiscent of a tired barman looking to get home after a long shift. Other participants started shuffling papers and started peering at mobile phone screens to check the time.

We wrapped up shortly thereafter and asked what the rush was. ‘We’re just so busy with people like you’, one of the more active participants in the group said, puffing down his clove cigarette. ‘We had an NGO earlier on this morning and there’s some rural development initiative coming this afternoon, adding pointedly ‘we’re not getting paid anything for any of this’. All told, he estimated he was involved in about five or so different committees, councils and networks in his suku (village). For those engaged in any sort of development programs in Timor-Leste, the duplicative character of much of these networks are known to hamper productivity and increase the burden on a minority of stakeholders, but that will be the subject of another post. Many programs, rightly and appropriately, want to be inclusive, consultative and gender-balanced, but the result is a lot of time in meetings, consultations, and focus-groups.

It’s exhausting work with the only rewards being empty pockets, full meeting diaries and perhaps the occasional t-shirt or baseball cap with a logo emblazoned on it. For rural people engaged with these national and international entities, days, weeks and months can be spent shouldering the governmental burdens of civil society.

We make these observations with the awareness that court officials and the like would never be expected to work for free in, say, Australia, Europe or North America. But the volunteerism that increasingly appears to be built into the expectations of states and donor agencies alike suggests that the development agenda is operating according to a strange calculus. We humbly suggest that the time and labour of people in developing countries is just as valuable – in terms of both social and financial capital – as that of people in wealthy countries. It is time and labour they are essentially donating to the state and to NGOs. But these are impressions only, and the problems we have outlined here merit further exploration with more focused – and paid – research.

Melissa Demian and Gordon Peake are Fellows at the State Society and Governance in Melanesia Program, ANU. Gordon’s book, Beloved Land: Stories, Struggles and Secrets from Timor-Leste, was winner of the 2014 ACT Book of the Year and People’s Choice Award.

Melissa Demian is a Fellow at the State Society and Governance in Melanesia Program, ANU.