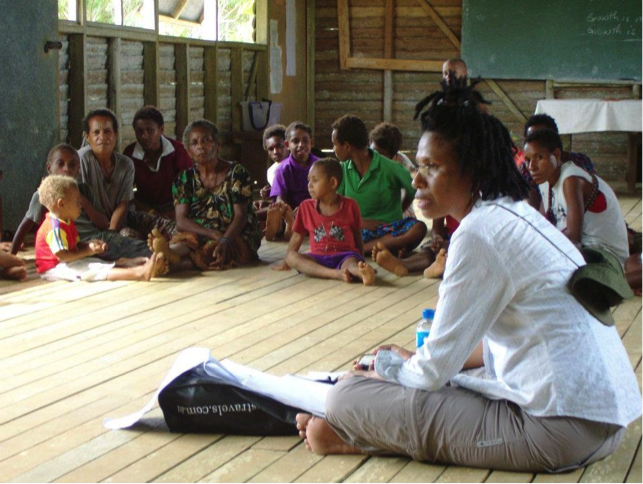 When women from extractives communities all over PNG gathered to share their experiences at the last Women in Mining and Petroleum Conference in Madang, we were struck by how much they looked to one deal as a benchmark – Ok Tedi.

The Ok Tedi mine has a well known and troubled history with impacted communities, yet in the minds of conference participants, the women at Ok Tedi had secured a good deal and they wanted it too.

At the core of the Ok Tedi deal, – a ring-fenced minimum 10% of benefits controlled by women.

On hearing the women at the conference we had two reactions:  first – 10% of benefits for 50% of the population doesn’t seem especially fair (especially when women bear the brunt of mine impacts) – why are the women so keen on it? Our second reaction – the gap between legal rights and reality (especially for women) is often as wide in PNG as anywhere – how has the deal been working in practice?

We’ve recently published a World Bank Justice for the Poor Briefing Note – “We Want What the Ok Tedi Women Have!” Guidance from Papua New Guinea on Women’s Engagement in Mining Deals, which records a modest effort to address these questions.

To our first reaction: In securing control of 10%, the women at Ok Tedi did something women hadn’t done anywhere else in the country – and as far as we can discern, anywhere in the world. (If there are deals we’ve missed we’d love to hear about them).  And the deal is quite lucrative – from 2007-2010 AUD$33m has been set aside for women and children. (Whether this – and the deal as a whole – is commensurate with the impacts experienced by women and men is another matter.) In addition, women secured rights to half of all educational scholarships and reserved seats at all levels of the deal’s governance structure. Fairness aside, the deal was a significant advance on the status quo.

That this came about in PNG, where gender inequality is marked, is notable. In part it’s a result of the quality of the overall negotiation process – which was in some ways a model one with independent facilitators, professional advisers for communities and a fair bit of time. Another key factor was the receptiveness of the mining company – which understood the business case for increased women’s engagement. Add to this astute female leadership which garnered the support of nationally esteemed male allies and the conditions for the deal arose.

As to how the deal is working in practice – our second reaction at the Madang conference – the experience is sobering. The mine is located in Western Province, one of the most challenging development contexts in PNG. Women decided to initially spend the bulk of their 10% on three learning centers (to build skills to engage in processes of development) but progress is slow, decision processes are not widely understood and the impacts unfelt in the villages we visited.

At the same time, one change that is having a real impact is the use of family – rather than clan – bank accounts for cash payments. Women – and youth – report this has greatly increased their chances of seeing the money and controlling how it is spent.

What we still don’t have a good handle on is the broader development impact of women having a role – both as participants and beneficiaries – in transactions like these (the evidence for welfare and efficiency gains from women’s inclusion in agriculture is stronger).

The intrinsic case for women’s involvement is often made, but this doesn’t always cut through with the disinterested or unconvinced, and is actively resisted by those who stand to lose. Evidence that shows broader developmental gains might appeal to those – such as the mining companies or the state – who have power in these transactions, and can bend them to include women.

Nicholas Menzies and Georgia Harley are Justice Reform Specialists at the World Bank and the authors of the recent Justice for the Poor Briefing Note “We Want What the Ok Tedi Women Have!” Guidance from Papua New Guinea on Women’s Engagement in Mining Deals.