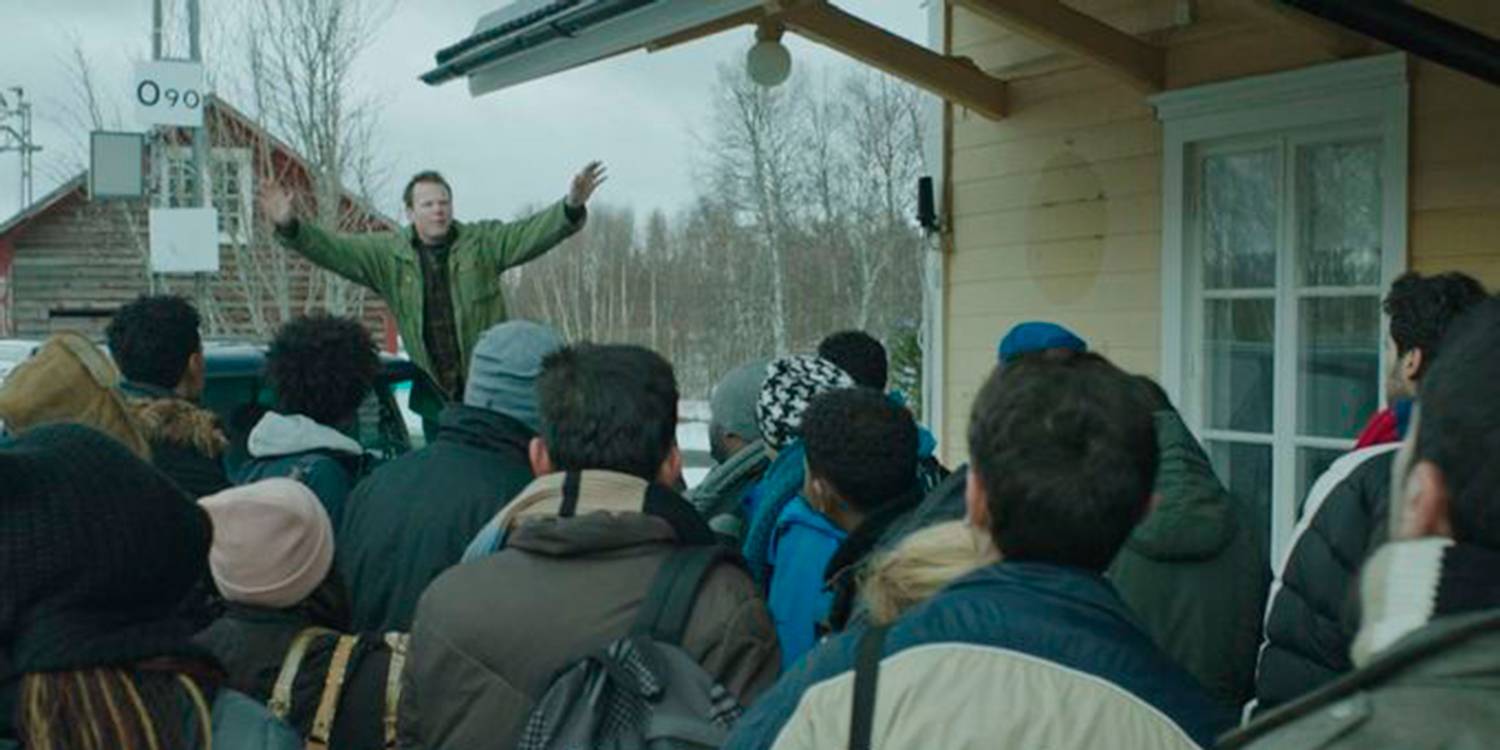 Per Primus, a failed businessman with a string of poorly conceived business ventures to his name and a long suffering wife and daughter, hits on the idea of converting his family’s failed hotel into a state sponsored refugee centre. All he needs is for the Norwegian Directorate of Immigration (UDI) to approve it and the government will give him 50,000 Krone per refugee. Or so he thinks.

Having failed to budget for the emotional, cultural and social fallout associated with the needs of the ideologically disparate new arrivals, the gaffe-prone Primus tries desperately to ready the centre for the arrival of the inspectors. For it to be approved, Primus is told he must supply English lessons, cultural integration classes, and amongst other rudimentaries, electricity.

As he lurches from one blunder to another, clumsily navigating each political, cultural and ethnic minefield that arises from hosting a melting pot of cultures in one cramped, frozen building, Abedi, a refugee from Congo takes him under his wing, acting as the literal translator of Primus’ instructions into five different languages and as his cultural interpreter — patiently explaining why a Sunni can’t room with a Shi’ite, and tactfully playing down Primus’ arrogant outbursts to the other refugees.

Conditions in his hastily assembled facility are dire: new arrivals are told they must clean and repair their own rooms, resources are thinly stretched and it is not long before the new arrivals string banners from the upstairs windows, wryly inscribed with the words ‘Gulag’ and ‘Guantanamo’.

Even the cinematography is bleakly apt. Forlorn frozen landscapes stretch as far as the eye can see, and the horizon is cold and unforgiving. There is no escape from this frozen wasteland, the film seems to taunt the refugees; this is as much a prison as the one you left behind.

Thus the title, ‘Welcome to Norway’, is the opposite of what Primus intends for the fifty asylum seekers. As far as he is concerned, housing “darkies” is his ticket to riches. Even Oda, his sullen teenage daughter, is embarrassed by his insensitivity. “Mum, Dad’s calling the refugees ‘darkies’,” she sighs, not missing a beat and in wearied exasperation at what we assume is another example of her father’s irresponsible behaviour.

It is not just the title that hoodwinks. Everything Primus does is deceitful; he lies to the refugees, his wife, and to Line, a welfare official, to get money for the centre. And he lies to himself, as Abedi points out when Primus tells him about the luxury travel he will do when he eventually gets government funding. “Who will go with you?” Abedi asks. “I wont go, the refugees hate you, and your wife and daughter reject you.”

At the start of the film, Primus is the least likable character. He can be heard boasting how much money the refugees will make him, and when the fuse blows on his shoddily-installed power supply, he complains, “It wasn’t meant to heat all of Africa!” Later on, the self-absorption of his character reaches its apex when, having discovered that his wife has learned of his extramarital activities, he tries to reason with her, saying, “But I did it for us.”

The tone of the film is conciliatory however, and as Primus relies increasingly on the ever-patient Abedi, he develops humility and compassion. Indeed, the screenwriter is careful to position the refugees in situations where they hold moral ascendancy or knowledge, and although this is a somewhat glib approach to characterisation, with the redemption of Primus through these relationships, the film seems to champion assimilative refugee policy as a means of communities acquiring tolerance and compassion.

Even Oda — silent, watchful, judging, and so often exasperated when dealing with her parents — eventually comes to respect her father. When Oda’s mother explains her refusal to support Primus’ asylum venture by saying, “Norway’s refugee policy is a mess”, Oda defends him, responding, “At least he’s trying to do something.”

The film is deeply ironic, and as a literary technique, allows the filmmakers to ridicule the intolerance of the community hosting the refugees and Primus’ tactlessness. As we watch him blunder his way through cultural etiquette, we understand his folly but he does not. Etymologically, the Greek root of ‘irony’ is eirōneia, literally contrived ignorance, and although the ignorance of Primus is not feigned, his complete witlessness about the people he brings into his home allows the film to poke fun at him, and at the same time, drive the debate about our perceptions and treatment of refugees. Used in this way, Primus’ behaviour forces us to question our own assumptions about refugees.

Some viewers will find its comic superficiality insensitive, and although the film would be enriched by a less cursory approach to the characterisation of the refugees (of whom, with the exception of Abedi, we learn little about), its lightness is arguably its strongest feature. During the screening I attended, the audience roared with laughter at the extent of Primus’ ineptitude (presumably with the moral assuredness of knowing they would act differently).

The one occasion where we are given insight into the refugees’ backstory, we are unprepared, and like the character in question, Line, fail to respond appropriately. Having chastised a female refugee that her reasons for coming to Norway are too “enumerate”, Line is dumbfounded by her response that she was “raped for three days by seven soldiers and then left to die.”

The uncomfortable silence that followed, both on screen and off, was palpable, yet the line was delivered with such exquisite comic timing that you could not help but wonder at the ingenuity of a filmmaker who so effectively captures the social awkwardness of asking a question and not being equipped to deal with the answer. The exchange is an apposite metaphor for Western asylum policy, and how woefully underprepared we are to support those fleeing from trauma.

Ironically titled, but an earnest portrayal of refugee miseries, ‘Welcome to Norway’ humanises a difficult subject and uses humour to gently probe a deeply sensitive issue.

Tara Davda is a Research Officer at the Development Policy Centre.

‘Welcome to Norway’ is currently showing at Palace Electric Cinema in Canberra, and at other cinemas nationwide, as part of the Volvo Scandinavian Film Festival.