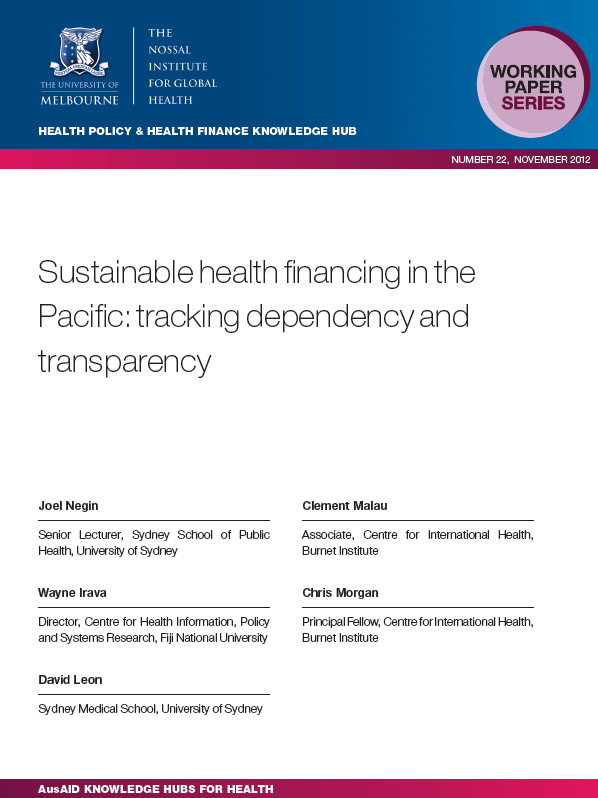 Across the developing world and in the Pacific region in particular, there has long been criticism of the over-reliance on donors (indeed this topic has been highlighted recently on devpolicy with regard to NGOs). Pacific Island countries (PICs) have been some of the largest recipients of official development assistance over the past decades. This has been particularly true in the health sector where a few PICs are among the largest per capita recipients of health aid in the world. Australia provides approximately half of total global ODA to the region – just under $1.2 billion in 2012-13.

But what do we actually mean by donor dependence? Is it a set figure, a mindset, a relationship and how do we know it has occurred?

Along with co-authors from the University of Sydney, Burnet Institute and Fiji National University’s Centre for Health Information, Policy and Systems Research, we examined some of these questions using health financing data from PICs that had completed National Health Accounts. The results are in a recently released policy brief. The project was supported by the Nossal Institute for Global Health’s Health Policy and Health Finance Knowledge Hub.

Alongside the concerns about dependence, development partners have, in recent years, become more explicit about the need for high levels of donor funding in some settings. The Australian Independent Review of Aid Effectiveness, published in 2011, stated that “in the South Pacific microstates (Kiribati, Nauru and Tuvalu), Australian funding will be a significant feature of budgets for the indefinite future, and it is best that Australian aid planning recognise that reality.” Similarly, the World Bank draft discussion [pdf] note on the Pacific Islands acknowledged that aid approaches need to adapt to “better reflect [the] likely long-term role in supporting social outcomes.”

So what are some of the trends of external support to the health sector in the Pacific region and is it too high? It is generally difficult to get reliable data but a new initiative in the region is helping shed some light on these topics. National Health Accounts (NHAs) systematically track the flow of money into and through the health system. Each transaction in the health system is classified using precisely defined, mutually exclusive classifications that allows for comparability across countries. In recent years, NHAs have been completed in Fiji, Tonga, Samoa, Vanuatu and the Federated States of Micronesia (FSM) and one is being planned in the Solomon Islands.

The NHAs reveal that in Fiji in 2010, the government financed 61% of total health expenditure with external sources comprising 9% – an increase from 3% in 2007. In 2010, the Australian government contributed 60% of the total external funds with the Global Fund and World Health Organization being the next largest.

Comparable data is available from Samoa, Tonga, Vanuatu and FSM. Using the most recent 2007 data, in Vanuatu, external donors provide 16.5% of total health expenditure, 21.4% in Samoa and 39.2% in Tonga. Tonga’s dependence on external financing is more than four times greater than that of Fiji. In Samoa and Tonga, major partners including Australia, New Zealand and the World Bank all contribute relatively similar amounts. Trend data is available for Fiji, Samoa, Tonga and FSM and is shown in Figure 1 as percentage of donor contribution to total health expenditure. 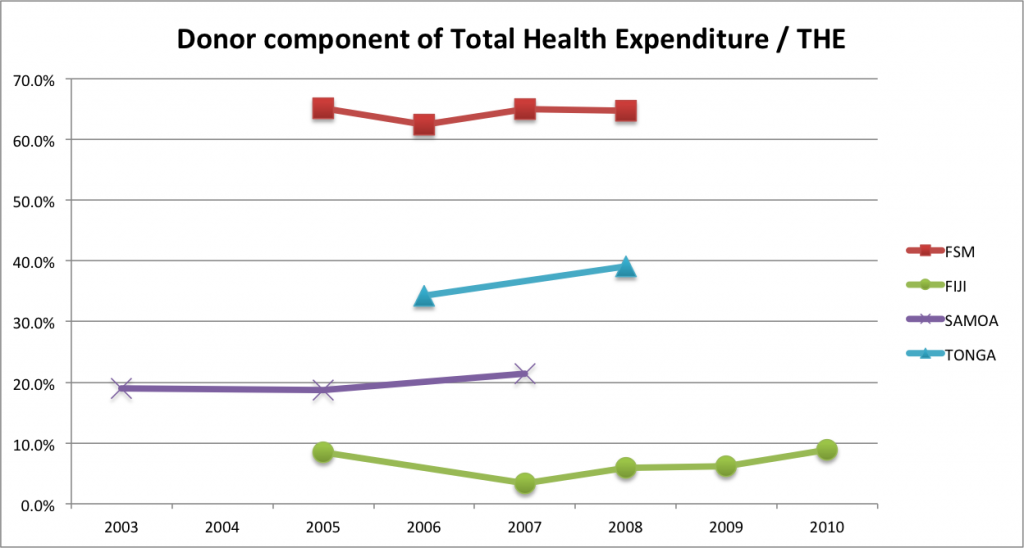 The NHAs also provide data not only on the percentage contribution by external actors but also the amount of the contribution. The US contribution to FSM stands out at almost US$200 per person – many times that seen in Tonga, Fiji and Samoa.

In summary, Fiji is less dependent on external sources than Samoa and Tonga which, in turn, are less reliant than FSM. The country specific data is critical to understanding health sector financing and possible areas that require alterations.

We acknowledge that the data provided is not perfect and likely does not represent the precise situation in the Pacific. Despite the clear benefit from having this type of financing information for planning and coordination, NHA experience has shown that it remains difficult to gather the data necessary to differentiate external funding by technical area or health system function. A considerable part of this difficulty arises from a lack of financial transparency from donors.

The implications of the large funding contribution made by external partners for public health activities are considerable as there is risk of development assistance influencing priorities. An earlier working paper [pdf] published by the Nossal Institute suggested that external allocations may follow donor priorities rather than domestic focus areas or general health systems strengthening. Despite much higher mortality rates from non-communicable diseases in the Pacific, external funding for HIV was found to be considerably higher than for NCDs. From 2002 to 2009, funding totalled US$68 million for HIV and US$33 million for NCDs.

The discrepancies between disease burden and external financing suggest that funds might be directed to areas that do not necessarily match PIC priorities or needs.  Donor dependence in the area of public health has considerable risks and greater discussion of how these funds are allocated and to which focus areas needs to occur.  That being said, AusAID and others have increasingly provided direct funding support to national budgets through sector support programs that reduce the potential for distortion.

The issue of donor dependence is a difficult one. There is no clear definition as to what constitutes dependence. Is it 9% as in Fiji or only once the external contribution approaches 60% as in FSM? When the Australian government notes that Australian funding will be a “significant feature of budgets” in some PICs, does that suggest an external contribution of 10%, 30% or more?  Have these questions been asked? Or is dependence more an issue of influence rather than amount?

Given the size of PICs and their state of economic development, some level of ongoing support from partners is to be expected but the question that arises is what level of donor support is considered “safe” and at what level does the support become dangerous “dependence.” Do development partners ask these questions when determining their financial support to the sector?