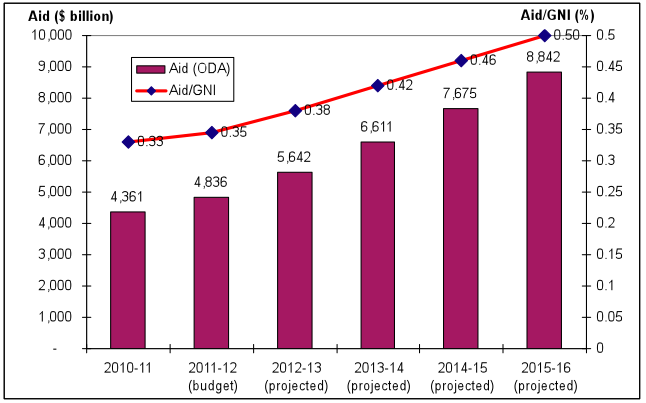 The 2012-13 budget has been the subject of an unusually intensive amount of media and sectoral speculation and debate in the last few weeks. This piece sets out what we should look for in tonight’s budget from an aid perspective, in terms of not only the numbers, but also the effectiveness agenda.

The aid scale up as per last year’s budget

We have certainly seen growth rates of that order before, but never such huge absolute increases. The largest absolute increase in the aid budget was $625 million in 2008-09. It’s hard to believe that the Government will follow through on such an ambitious commitment at a time of fiscal restraint. And if it chooses a smaller increase for this coming year, then one would have to guess that the 2015 target would be postponed to avoid looking at even bigger increases in the next few years.

So much for aid quantity, what about aid quality? This is an important issue, not least because this budget is the first since the release of the Independent Review of Aid Effectiveness (disclaimer: in which I participated) and the Government’s response to that report.

First of all, there are a few interesting allocation issues which will tell us about the direction of the aid program as a whole. As part of its call for less fragmentation and greater focus, the Review recommended an end to country program aid to Latin America and Carribean. Last year though, the Government further increased the country program for this region from $40 to $48 million.

While the Review recommended no further increase in country program aid to Africa, it did recommend an increase in overall aid to Africa, but through core funding to effective organizations which already work on that continent. To track this, it is necessary to report not only country program aid, which is what the budget normally tells us, but also aid allocations, which go beyond country aid programs to include an estimate of how much of Australia’s core funding to different international organizations is spent in any particular region. This makes a huge difference, especially for Africa since it is the centre of the global aid effort. As estimated by the Aid Review, our aid allocation to Africa is twice the size of our aid program. AusAID has agreed to report country allocations as well as programs, and it will be interesting to see if that starts in this budget.

On allocations, the Review also recommended increased core funding to effective international organizations. It isn’t always easy to tell from the budget how much core funding the aid program provides, but this is nevertheless something to watch for. Whether the scale-up of aid will succeed will depend on how it is done. Providing more core funding to good organizations is not only a good way to spend aid money; it also reduces the management burden on AusAID.

Finally, there are recommendations for increased spending on humanitarian aid, and for agricultural and medical research, all of which the Government has agreed to and said (p. 61) it would release details on with the 2012-13 budget.

AusAID has already  announced that it will be releasing two important documents with the budget: a four-year budget strategy and the results framework. The former is intended to provide a firmer basis on which to scale up than the current practice which leaves large amounts of planned increases of aid unallocated to any regions or programs. It certainly has the potential to provide the aid program with a longer lead time for planning than has been the case so far, and could lead to major effectiveness gains.

The Aid Review also recommended an end to the practice of scaling up through discrete initiatives known as New Policy Proposals. It was argued that these led to fragmentation, and diverted attention from the aid budget as a whole by focusing on a subset of activities artificially labelled “new.” Reading the Government’s response to the Aid Review it looks like there will be still be New Policy Proposals (see p.63), which is a pity, but we can still watch to see how extensively there are used. In the last budget, there were 8 NPPs for about $1.9 billion over the next four years.

The results framework should help us all hold the aid program more accountable. The Government has agreed to a three-tier framework under which there would be reporting at three levels: against development goals at the partner country level, the contribution of Australian aid, and operational and organizational effectiveness. I hope that the last is not forgotten about, and that the results framework sets out concrete goals for challenges directly under AusAID’s control. In aid, it is often the prosaic that matters the most. For example, targets for reduction in staff churn would be a big step forward. The Aid Review informed us that  “[t]he most consistent feedback” it received “was that AusAID’s effectiveness was undermined by rapid staff turnover.” (p.29)

Finally, the Government has said  that the Independent Evaluation Committee will meet for the first time before the half year is up, so it is possible that this will be announced at budget time as well. This reform is intended to improve the independence and quality of AusAID’s major evaluations, which would be overseen by this new body.

All in all, it is an unusually important and interesting budget from an aid perspective. We’ll be bringing you analysis and perspectives on our Devpolicy blog, starting with our budget brief tomorrow.