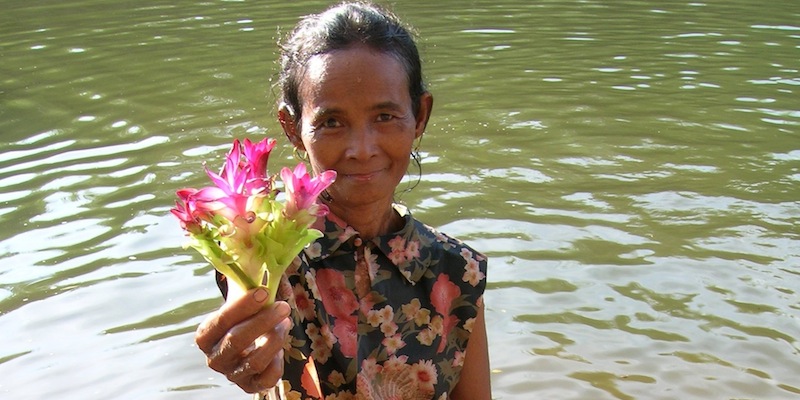 The third Australian Council For International Development (ACFID) University Linkages Conference took place on 28 and 29 November at the ANU. The theme of the conference was ‘The Challenges of Participatory Development in Contemporary Development Practice’. Past themes have been on meeting the MDGs and Australian approaches to development. Over 470 people (made up of academics, students, NGO workers, Government officials, and freelance development practitioners) attended this year’s conference, and packed out the Manning Clark Centre.

After Chancellor, and former Foreign Minister, Gareth Evans woke many of us up with his rousing welcoming address that referred to doing research for development rather than just about development, one of the conference’s star attractions, Professor Robert Chambers, took to the podium to deliver the first of the four keynote addresses.

Responsible for spawning much of the debate about participatory development, and notions such as ‘putting the last, first’, Chambers proved stimulating as ever.  You can find his keynote on the blog here.

While I am sure all 77 presenters’ presentations over the two days (you can find the entire list of presentations here) are deserving of review, I am unfortunately only able to provide commentary on presentation sessions I attended.  The first concerned Monitoring and Evaluation. The common theme of this group was to do with including communities in the evaluative process.

Nicholas Bates of the Albion Street Centre began the first session on communities taking the lead on monitoring and evaluation of HIV capacity building. He argued that there is a need for enabling communities to develop their own tools and approaches for evaluating capacity building, and that these methods could enable a broader standardization of evaluation approaches used by governance agencies. Next, Katie Chalk of World Vision provided a review of her organisation’s external stakeholder assessment methodology. The external stakeholder assessment methodology’s evolution over three years was discussed in relation to achieving more accurate portrayals of stakeholder views.

Dr. John Donnelly then elaborated on an apparently simple methodology that could bridge the schism between “grassroots rhetoric and top-down practice” for community development. Donnelly’s methodology was aimed at greater inclusivity by involving community members in identifying objectives and monitoring the results of the project for greater ownership.  Finally, Kariyawasam Sanjeewanie from Sri Lanka’s Centre for Poverty Analysis concluded the session with a presentation on building trust by allowing communities to be responsible for projects, in this case a sewerage system in Gothampipura disctrict, Colombo.

After lunch Dr. Alan Fowler, Emeritus Professor at the Institute of Social Sciences in The Hague gave the second keynote presentation entitled ‘Can aided civil cociety organisations engage with unbounded activism?’ Fowler noted the huge surge in protests and activism of late, and perceived world governance to have arrived at a precipice with problems of poverty and climate change. He wondered if civil society organisations that are provided aid are able to really engage with activism to bring about change. Fowler attempted to address this otherwise unorthodox situation by arguing that aided civil society organisations are unable to engage with new activism, and are therefore out of the loop in relation to ‘keeping up’ with societal change. After the conclusion of the biting social commentary (!), I attended the next session on community participation.

Kicking off proceedings was Pamela Thomas of the Crawford School, and Anna Naupa, David Momcilovic and Obed Timakata of AusAID Vanuatu. They reviewed AusAID’s engagement with civil society programs in Vanuatu, and noted that partnerships through civil society engagement in the Pacific are a relatively new method for managing development assistance. They showed that the demonstrated positive impacts from two projects at a women’s crisis centre and the Wan Smolbag theatre have encouraged further civil society engagement.  Next was the very frank and engaging Dr. Nawal El-Gack from the University of Canberra who discussed the dichotomy between the promises and realities of donor driven development. She argued that a great deal depends on the character of the development practitioner, as sometimes development practitioners are prone to manipulating participatory concepts to maintain funding and their own benefits.

To conclude the session, Professor Robert Power of the Burnet Institute presented. Interestingly Power began his talk by identifying the need for employment for participatory development, which was not otherwise being discussed at the conference. He then returned to his presentation, which provided commentary on risk and reproductive health among adolescents in rural Zimbabwe. He showed that using participatory methods enabled communities to develop responses for risk reduction.

Thursday began promisingly with two keynote speeches, one after the other. The first was given by Emele Duituturaga of the Pacific Islands Association of Non Governmental Organisations. Her talk entitled ‘Whose development if not mine?’ was very engaging. It revolved around epistemological issues for “pracademics”, and advocated that research and development in the Pacific must take into consideration gender discrimination. Continuing on the theme of gender, Professor Gita Sen of the Indian Institute of Management Bangalore and DAWN delivered a interesting lecture entitled ‘Motherhood and apple pie? Being a feminist in a development organisation’. Sen argued that addressing gender issues is shrouded in a mantle of political correctness. Subsequently, development policy is rarely inclusive of gender power relations, yet gender issues need to be addressed at all levels for successful development.

The third session of presentations I attended concerned methodology for participation. Associate Professor Chris Roche of LaTrobe University provided a very provocative address exploring the dynamic between the results agenda and participatory development that was somewhat similar to his May Devpolicy post. Roche concluded that the politics of evidence and evaluation matters to participatory development; that participation is necessary but not sufficient for social progression; and that creating space for debating alternative means of valuing progress is important.  Yvette Selim, a PhD candidate at the University of New South Wales, then spoke on the adaptation of participatory methodology to transitional justice issues with reference to examples from Nepal. Selim highlighted the criticisms of transitional justice (that it’s top-down, ‘one-size fits all’, imported and state centric) and showed that participatory methods could enable inclusion ameliorating these criticisms, while also noting the challenges to successful implementation.

Dr. Christina Muli and Naomi Godden from Oxfam then presented a paper on using peer review in participatory action research methodology. Their presentation focused on a water, sanitation and hygiene (WASH) project in six countries, where Oxfam and partners in those countries peer reviewed each other to collaborate on what could be learned. Their model attracted considerable attention in the question and answer session with some audience members concerned about country offices reviewing one another in relation to potential instances of bias.  After lunch, the fourth session of presentations commenced. Accountability and impact was the theme for the last session I attended at the conference. Dr Adam McBeth from Monash University and Oxfam was first to speak. His presentation on Oxfam’s approach to helping communities hold local members of governments accountable, along with Oxfam itself, highlighted many challenges in attempting to generate local accountability processes.

Jenni Graves from the Albion Centre then attempted to warm up the audience with a humorous talk on volunteering and misguided principles. She echoed much of the sentiment from Emele Duituturaga’s keynote on epistemological issues, but this time with regard to the intentions of volunteers versus outcomes.  Dr. Tira Foran from CSIRO followed, with a presentation which concerned factors in the Mekong region influencing local decision-making, and in turn, leading to undesirable outcomes. He presented a method for providing effective support to participatory processes across decision-making levels, and argued that the method could be used to help learning by decision makers and those influencing decisions. Bill Walker from World Vision then concluded the final group session with a discussion of the Citizen Voice and Action method in relation to a Ugandan case study.

To conclude the conference, a closing panel was convened. The panel consisted of the keynote speakers, Elizabeth Reid from ANU and Oxfam, Paul Nichols an Assistant Director General at AusAID, and Julia Newton-Howes, CEO of CARE Australia. Alan Fowler directed proceedings with intriguing questions that provoked lively responses. Members of the audience were rapped with the closing debate between Gita Sen and Robert Chambers, who discussed whether development practitioners can really provide empowerment. To see what was said in the closing panel, and in the keynotes, stay tuned to the Conference website  which will be updated shortly. It was a wonderful event, and many thanks must go to Patrick Kilby and his team for its great execution.

Colum Graham is a Researcher at the Development Policy Centre.