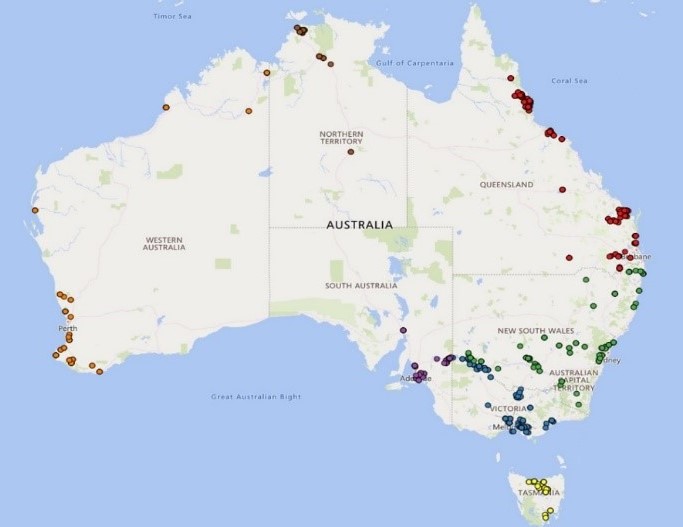 Australia’s Seasonal Worker Programme (SWP) is often seen, incorrectly, as an aid program. For example, a blog posted on the Lowy Institute’s Interpreter (15 April 2020) claims that “labour mobility is managed under the aid program”. This widespread misconception can affect how both sending-country governments in the Pacific and Australian agencies manage their roles under the SWP.

Both the SWP and the Pacific Labour Scheme (PLS) are entirely driven by employer demand. Employers participate on a purely voluntary basis. There are no country quotas. Understanding the role of employers in the operation of the SWP is crucial to understanding how it works and how effective it is.

All aspects of the employer’s engagement of workers are highly regulated, starting with the extensive vetting process an employer must go through to gain approved employer (AE) status.

AEs essentially fall into two categories. The first type of AE is a grower or farmer who not only employs seasonal workers, but also supervises them at work and provides pastoral care. The second type of AE is a labour hire company which is responsible for all aspects of being the legal employer, such as payment of wages as well as meeting the pastoral care obligations, but does not supervise the worker during work hours. The labour hire company or contractor is a labour market intermediary supplying labour services to a host workplace. The advantage for growers of this arrangement is that they can, for a set fee per worker per hour worked, minimise their transaction costs and risks, especially relating to overseas recruitment. Some farmers prefer hiring directly, but, in general, the smaller the farmer and their demand for labour, the more attractive it is to go through a labour hire company.

Data provided by the Department of Education, Skills and Employment (DESE) allowed us to undertake some analysis and provide some interesting insights into which types of employers use the SWP, and how many workers they hire. (Please see notes at the end of the blog.) 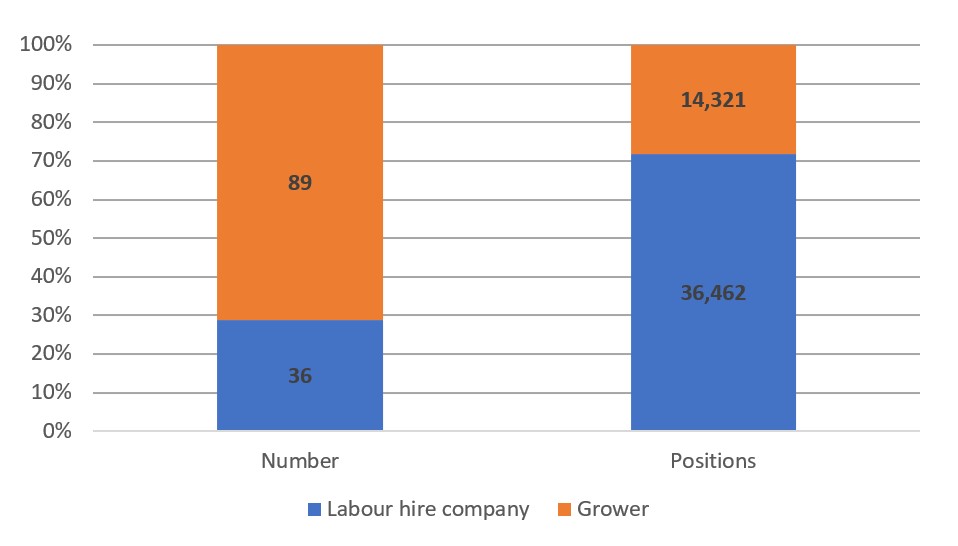 Moreover, SWP approved positions (or jobs) have been concentrated among a small number of AEs, mainly labour hire firms. Figure 2 below lines up all employers from largest to smallest on the horizontal axis and shows what share of approved positions are due to the biggest (1, 2, 3, etc) firms. The top 31 AEs employ 90 per cent of all workers. The top four employers (all labour hire firms or ‘L’ in the figure) account for nearly half of all SWP jobs (48 per cent), while the top ten employers (of which seven are labour hire firms) account for 70 per cent. 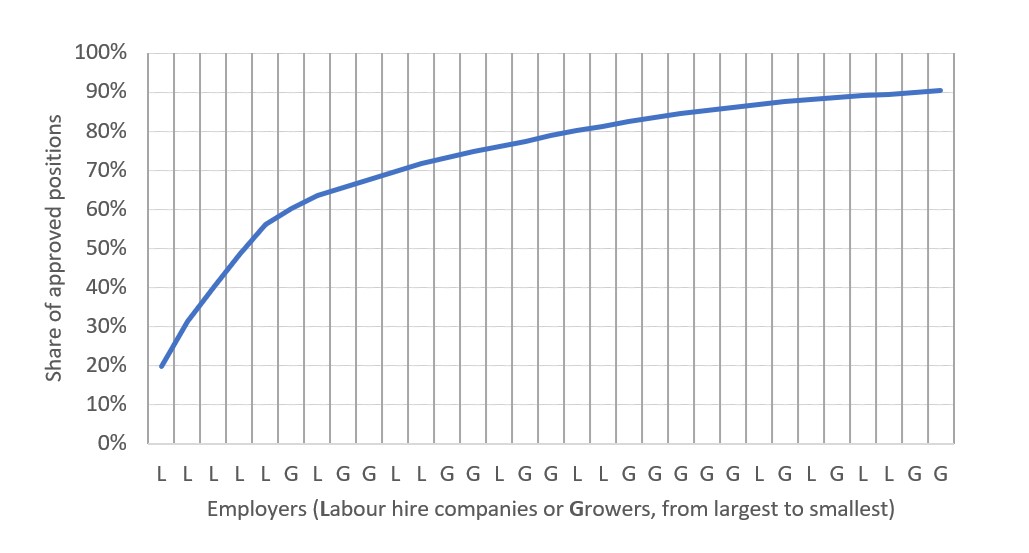 Note: ‘L’ is a labour hire company, and ‘G’ is a grower. Only the top 31 hirers are shown, ordered from largest to smallest.

What is the reason for both the dominance of labour hire companies and the concentration of employment within a few companies? The SWP has high transaction costs: all workers are hired from overseas; they require pastoral care and accommodation; and numerous government regulations have to be satisfied. These costs are only worth incurring if they can be spread over a large number of workers, and they are less onerous if the firm has labour market expertise. Labour hire companies are able to hire large numbers of workers, provided they can get a number of farmers interested. They also specialise in understanding the details of often complex labour regulations, so they are well positioned to bear the resultant transaction costs.

A second key feature of the SWP is the geographical spread of workers’ jobs. SWP workers are employed in all states and the Northern Territory. Figure 3 shows that Queensland is in the lead with 38 per cent of all SWP placements, followed by Victoria (18 per cent), NSW (13 per cent) and South Australia (12 per cent). 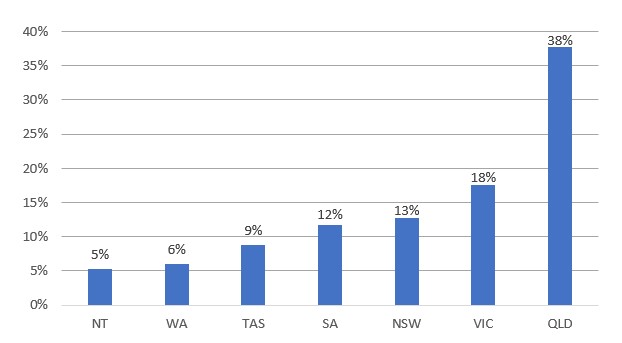 The large geographical spread of SWP workers across and within states (Figure 4) is in marked contrast to the concentration of Recognised Seasonal Employer scheme workers in specific regions of New Zealand. It is also another reason for the dominance of labour hire companies in the SWP. If your farm is very remote, you may not want to be responsible for your workers as soon as they arrive in, say, Brisbane. You might rather contract out responsibility for recruitment and transport. Also note that, while having such a dispersed program makes it difficult to monitor, having a few dominant players has the reverse effect.

We have also seen in our analysis of Pacific countries participating in the SWP that the countries that have been most successful in sending workers to Australia are those that have attracted the large labour hire companies. This latter group can scale up rapidly (as they recruit new farmers to supply labour to) and can take a lot of the burden of governance of the program away from the sending country, both before the workers leave, and when they are in Australia.

The best SWP stories come from the small growers: those farmers who have developed a long-term personal relationship with a relatively small group of workers (for example, here, here and here). However, it may well be that the future of the SWP is with large labour hire companies, who are able to manage its heavy regulatory burden as well as sending-country vagaries, and who are able to de-risk the scheme for growers.

Sources: DESE approves SWP positions on demand, and our analysis is based on the cumulative number of annual approved positions between 1 July 2012 and 12 February 2020. DESE data covers the names of employers, the number of positions approved for that employer in the period, and the state in which they are approved. We have categorised all employers as either growers or labour hire companies (contractors are included with the latter).

Note also that the number of seasonal worker positions approved and the number of these positions an approved employer fills through the SWP may not be the same, for a variety of reasons. In fact, the number of SWP visas granted between 1 July 2012 and the end of January 2020 was 46,575 compared with the 50,783 SWP approved positions for roughly the same period (ending 12 February 2020).