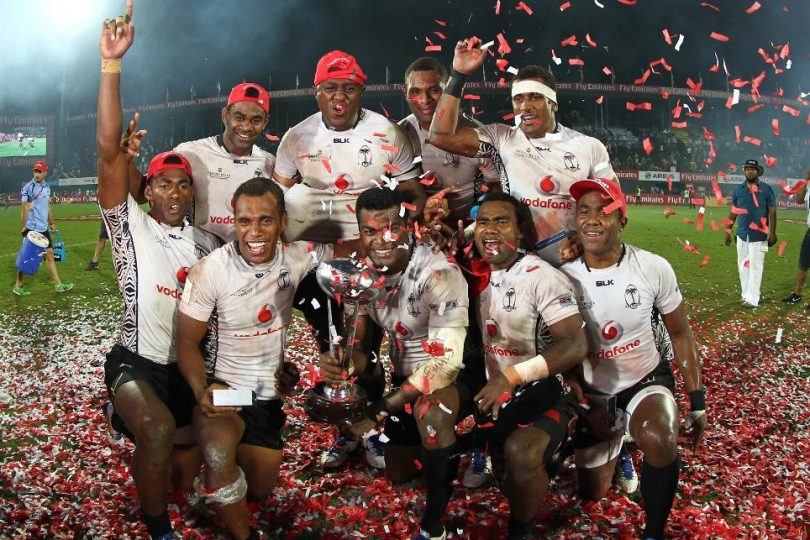 The Fiji team after winning the opening round of the HSBC World Rugby Sevens Series in 2015 (Photo credit: World Rugby)

In three years, former England coach Ben Ryan, took Fiji from a side that rarely won against the top developed country teams, to their first ever Olympic Gold medal in men’s rugby sevens at Rio. With no training kit or water bottles, worn out old balls and a mosquito-infested pitch in the middle of an army camp, over months, he got to know the families and communities and learnt by trial and error what motivated the players and the cultural challenges they faced. Above all, he learnt how to harness the power of Fiji’s cultural traditions to effect change.

In his book, Ben describes how he set up a 40-metre sprint test, only to record the slowest time he had ever seen sevens players. They appeared unmotivated and lacklustre, going through the motions, until Ben’s local physio suggested getting the players to chase each other. With a player five metres behind, the change was instant, ‘like watching a pair of synchronised explosions. Running 40 metres for no reason made no sense to a Fijian’.

I had a similar experience in West Africa. I was assessing an USAID Food for Peace project that provided high protein soy powder to raise the nutrition levels for lactating mothers. During my visit to the program, I had noticed that the mothers were getting three times the allocated amount and was told that this was to compensate for spillages. I duly noted the contravention in my report and raised the risk that the mothers could be selling the powder and profiting from the donation.

Proud of myself, I gave my report to a local colleague, eager to show my expertise as a development consultant. To my surprise, he was angry. The report had jeopardised the whole project. The reason for the over-allocation was that a third went to the husband and a third to the other children, leaving a third as the right amount for the mother. I was being paid ten times that of my colleague, as the expert, but I had failed in my first responsibility to understand the culture I was working in.

Sadly, thirty years later, I still see well-meaning aid workers, consultants and technical experts design and implement projects and programs that look good on office whiteboards and in multi-coloured diagrams, but fail to understand the needs, assets, culture and communities they work in.

Ben makes the observation that ‘I couldn’t change Fijian rugby without Fiji changing me first’. How many of us are willing and able to make this change? And if we don’t, can we be effective as development workers? Will the change we seek be appropriate and sustainable?

Australian Herb Feith is recognised as the world’s first international volunteer for development. In her book, Jemma Purdey tells the story of a picnic that Herb attended with American colleagues in Jakarta. As they brought out their lunch of American items, purchased from the embassy shop, Herb unwrapped his banana leaves. Herb believed that living and working as his local colleagues built trust and respect, cultural understanding, and the ability to determine what change he could make, and how he could make it.

This ethos has been at the core of Australian volunteer programs for over sixty years and has led to over 12,000 Australians building capacity with 3,000 partner businesses, government and community organisations in 89 developing countries. AVI has also used this approach to harness the skills and experience of mentors in partnership with DFAT in Timor-Leste and Solomons. These workers take the same bus to work with their colleagues, go to the local market together, share celebrations, and take time to build relationships. They are there to learn and contribute to change, not drive it. For me, this is sustainable development.

Paul Bird is the CEO of AVI (formerly known as Australian Volunteers International).