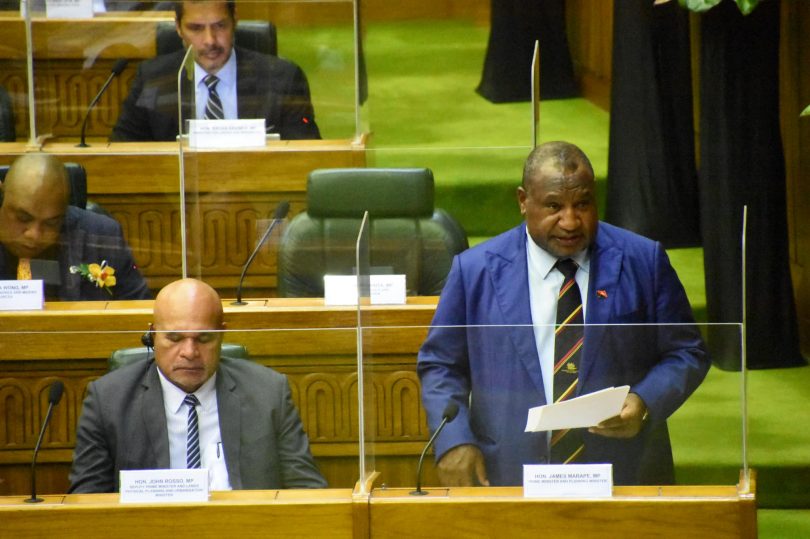 Two factors favoured James Marape going into the 2022 national elections and helped ensure his return. First, section 63 of the Organic Law on the Integrity of Political Parties and Candidates (OLIPPAC) passed in 2001 (and subsequently amended in 2003) mandates that the party with the highest number of MPs elected following a national election be invited to form the government. This is why there was only one nominee – James Marape – when parliament met to elect the PM for the 11th parliament. Marape’s Papua and Niugini Union Pati (PANGU) had 36 MPs to Peter O’Neill’s People’s National Congress party (PNC)’s 14 when parliament met.

The second has to do with the political culture of PNG’s parliamentary politics. Over the life of the parliament, MPs tend to join the party of the PM. The PM’s party then goes into the elections with by far the largest number of MPs, and subsequently emerges with a higher number of MPs. PANGU’s success in 2022 is a result of this pattern, with 25 out of 32 or 78% of incumbent MPs getting elected. In late April 2019, PANGU was left with only one MP, the former Governor of Morobe Province Ginson Saonu. PANGU numbers increased after Marape was elected PM and joined the party. PNC’s numbers fell from a maximum of 48 to a low of 13 in the same period after O’Neill was forced to resign as PM. Six got re-elected in 2022.

The question now is whether Marape can stay in power once the 18-month grace period expires – within the first 18 months following the appointment of a PM, a vote of no confidence is not permitted. In a vote of no confidence, any MP – one from a small party, or an independent for that matter – can contest for the PM’s seat. Unlike immediately after the elections, there is no special treatment for or protection of the largest party.

Only two PMs have ever completed their five-year terms. The rest were either replaced in a vote of no confidence, or resigned to avoid one, whilst the Supreme Court ruled Paias Wingti’s re-appointment as PM in 1993 unconstitutional.

Michael Somare was the first. His completion of the 2002–2007 term is often attributed to provisions of OLIPPAC which prevented MPs from switching parties. These provisions were declared unconstitutional in 2010.

Peter O’Neill was the second PM to complete a full term. He completed the 2012–2017 term partly as a result of a slew of constitutional amendments. These included extension of the grace period from 18 to 30 months, an increase in the number of MPs required to sign the motion for a vote of no confidence from 11 to 22, and an increase in the prior notification to parliament of a vote of no confidence from one week to 30 days. Because the opposition was depleted at the time, opposition MPs did not have the minimum number of MPs required to institute a vote of no confidence when the extended grace period ended. These constitutional amendments were all declared unconstitutional in 2015, but helped O’Neill prior to that.

Marape does not have the protection of OLIPPAC that Somare had, or the protection of constitutional amendments that O’Neill had. And he knows well how things can change once the 18 months grace period is over. In 2020 when the grace period following his 2019 election expired, as many as 20 MPs, led by the deputy PM and some other senior ministers, left his coalition to join the opposition. It was only through clever manoeuvring, including an unconstitutional sitting of parliament, and the use of adjournments, that Marape was able to survive as PM.

The limited window for a vote of no confidence also helped him, as a vote of no confidence is not possible 12 months before the next election. The opposition basically ran out of time trying to remove Marape as PM as the 2022 elections approached. In no term has PNG ever had more than two PMs, so the one who is second is normally secure. This time round, Marape is the first PM of the 11th parliament. To stay in power, he will have to defend votes of no confidence from early 2024 to mid-2026.

Votes of no confidence are power games, but need a narrative to succeed. Investigation into cases of alleged fraud, such as Marape’s son being linked to money laundering charges, are a risk for Marape. Inflation, delays in resource projects, and election-related violence are other issues that the opposition will likely use as grounds to mount a motion for a vote of no confidence.

Three things are in Marape’s favour. First, several political figures who led the charge to replace him in the last parliament and might be expected to in this one are not in parliament. Patrick Pruaitch lost his election, and Sam Basil passed away. Peter O’Neill has decided not to take the opposition leader’s position, suggesting that he will back an alternative to Marape rather than run himself. But, at least for now, there is no clear alternative.

Third, PANGU has had a convincing election result, and Marape has strategically appointed key MPs in the party to important ministerial portfolios, and retained 62% (21) of the ministries within PANGU. If Marape can keep PANGU together, he can survive the loss of a coalition partner.

Keeping his own party united behind him will be Marape’s key challenge as he seeks to become PNG’s third prime minister to survive a full term of parliament.