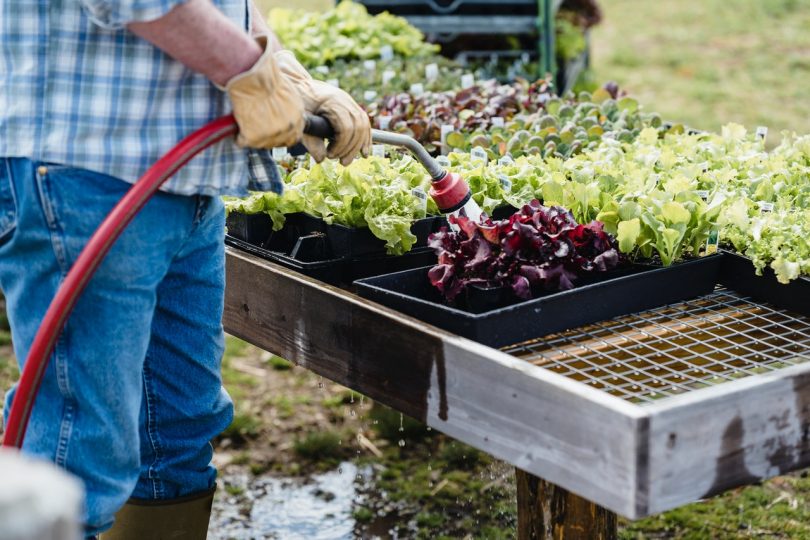 We’ve told the story before on this blog about how John Howard, under pressure from farmers in relation to workforce shortages, but unwilling to create a seasonal worker program, introduced the second-year backpacker visa in 2005 to be granted in return for three months (more specifically, 88 days) of agricultural work in the first year.

The policy shift was both transformational and damaging. It pushed tens of thousands to work on farms to get that second-year visa. The number of backpackers claiming the extension rose to 40,000 within a decade. The reform certainly solved the problem of agricultural labour shortages, but no safeguards were put in place and exploitation of backpackers has been rife ever since. Ten years later, the Fair Work Ombudsman conducted two inquiries. The findings supported the view that the “the work-for-visa system is broken” and uncovered “an environment of unreasonable and unlawful requirements imposed on visa holders by unscrupulous businesses.”

A couple of years after John Howard refused to, Kevin Rudd introduced the Seasonal Worker Programme (SWP). This was and continues to be a tightly regulated alternative. Not surprisingly, it took a long time to grow. But as backpacker growth levelled off, and as authorities started to crack down on worker exploitation, the SWP expanded. A major 2017 University of Adelaide study funded by horticulture industry associations found that “[t]he SWP results in less exploitation of workers … when compared with other low-skilled visa pathways”, such as backpackers.

And now there are signs that the scales may be further tilting in the direction of seasonal workers.

Two parliamentary committees have recommended fundamental reforms to the way the backpacker visas work. In November 2020, the Joint Standing Committee on Migration recommended in the report of its inquiry into the backpacker visas that the second-year visa extension also be given in return for work in regional tourism and hospitality. Since most backpackers would rather work in a pub than on a farm, this would reduce the availability of backpackers for the agricultural sector.

Then in September of this year, a Senate Select Committee on Temporary Migration handed down its report. This committee made the even more radical recommendation that the 88-day requirement be abolished altogether. The backpacker visas, the committee argued, should be refocused on their original purpose of facilitating cultural exchange, and the Seasonal Worker Programme (SWP) should become the “predominant source of low and semi-skilled labour in Australia’s agriculture industry.”

The government is yet to respond to either committee but, at least rhetorically, seems to be moving in the same direction. The recent factsheet put out in relation to the Australian Agriculture Visa (which will allow Asian farm workers into Australia) said that the SWP (now rebranded, together with the Pacific Labour Scheme (PLS), as PALM – the Pacific Australia Labour Mobility Scheme) would “remain the primary scheme for meeting agricultural workforce shortages.” 10,600 Pacific workers have arrived since the recommencement of the two schemes in September 2020, and there are plans to bring in another 12,500 by March. These are not all farm workers (PLS mainly supplies workers for meat processing), but many are.

These are all positive signs of a much-needed change in balance, but any claim of victory for the SWP would be premature.

There are still many more backpackers than seasonal workers on Australia’s farms. Although, due to the pandemic, backpackers have stopped coming to Australia, and many have gone home, the reduction in those backpackers who have received a visa extension in return for farm work has been more modest. In 2018-19, 36,100 backpacker visa extensions were granted in return for agricultural work. In 2020-21, there were 29,100 – a drop but still a sizeable number.

Not all who get a visa extension from farm work will continue to work on a farm in their second year, and not all who work on a farm will apply for an extension. While the number of backpacker visa extensions given out for farm work is therefore far from a perfect measure of backpackers on farms, it is the best one we have, and it shows that backpackers still greatly outnumber seasonal workers on farms. Looking at the graph below, it is very hard to know what the government means when it says that the SWP is the “primary scheme for meeting agricultural workforce shortages.” 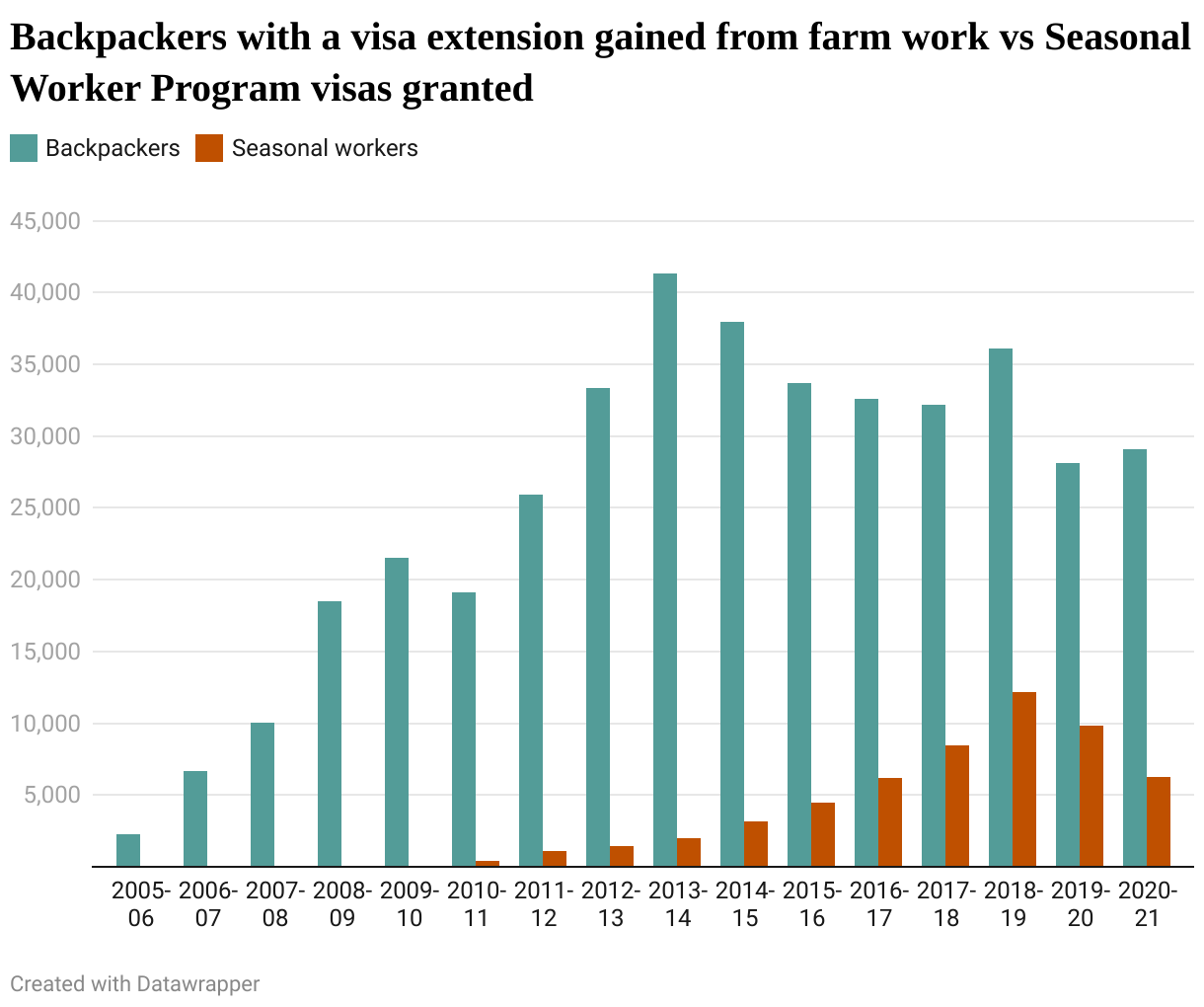 In recent years, the second-year backpacker extension has itself been extended. Since 2019, if you do regional work for six months in your second year, you can stay for a third. The graph above includes both second- and third-year extensions given to reward earlier farm work.

Given this ongoing dependence of agriculture on backpackers, it is unlikely that any recommendations that threaten that dependence will be accepted by government. The Senate Committee which recommended the abolition of the 88-day rule had four members, two Labor and two Liberal, with a Labor chair. The Liberals wrote a dissenting report in which they disassociated themselves from the “industrial relations” proposals of the main report. It isn’t clear whether the backpacker recommendations were thereby being rejected by them, but it is significant that there was no National Party senator on that Committee. It was the abolition of the 88-day rule for British backpacker visas which was deemed so unacceptable by the Nationals that it enabled them to obtain their long-sought-after Asian agriculture visa in return.

In summary, it is too early to declare victory for the SWP. Seasonal workers are still outnumbered by backpackers on Australian farms, and, with the reopening of borders and the growing popularity of the third-year visa option, this backpacker dominance will intensify. And now of course there is the Asian agriculture visa to contend with.

While the future of the SWP is far from assured, the recommendations and findings of these two parliamentary committees are significant. It will be hard to ignore the finding of the Senate Committee that the 88-day rule “is a systemic factor that contributes to exploitation” (p.180). While it is unlikely that the 88-day rule will be abolished (Recommendation 9), other recommendations of the Committees are more realistic, and could themselves have a powerful impact. Recommendation 13 is that any employer of a temporary visa holder should be required to obtain accreditation – as any SWP employer currently has to do, and any backpacker employer does not. Recommendation 15 would ban employers from hiring further backpackers if they were found to have breached workplace laws. Recommendation 24 supports a National Labour Hire Licensing Scheme. Implementation of these recommendations would help level the playing field between backpackers and seasonal workers.

Note: There are two backpacker visas: the 416 (Working Holiday Maker) and the 462 (Work and Holiday). Chapter 2 of the Working Holiday inquiry report has an excellent summary of the two visas and their evolution. SWP data is from the Department of Education, Skills and Employment. Backpacker data is from the Department of Home Affairs. We assume 85% of visa extensions are for work in the agriculture, forestry and fishing sector up to 2011-12 based on data for that year. Sectoral data for subsequent years is available (mostly for both visas, and for third-year visa extensions as well), but for 2020-21 is based on the first six months only.