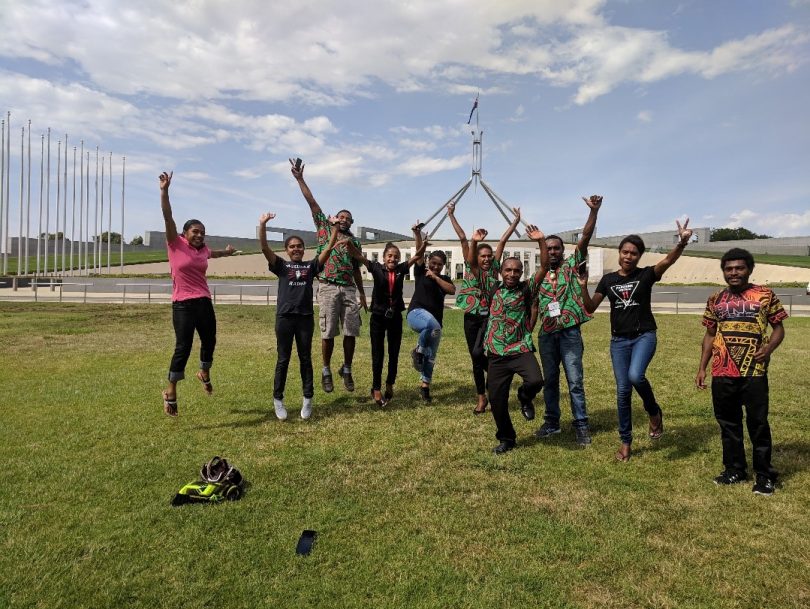 We have just said farewell to ten final-year undergraduate students from the University of Papua New Guinea (UPNG) who this week completed the second ANU-UPNG summer school, run by the Development Policy Centre and the Crawford School of Public Policy, ANU. The summer school is part of the ANU-UPNG partnership funded by the Australian government through the Pacific Leadership and Governance Precinct. The students take part in a five-week international program: an economics and public policy boot camp. They also meet senior government officials and leading researchers working on PNG. And they get to see a bit of Australia, including the beautiful Batemans Bay.

It was a great experience for all, but they almost didn’t make it.

My job as Project Coordinator and Lecturer based in Port Moresby was to assist our selected students last year to obtain all their necessary travel documents. It was my first time, and I was lucky to have some notes from my predecessor. We started the selection process as soon as the results for Semester 1, 2018 were made available at UPNG. By end of July last year, we already had a full list of ten candidates and four reserves, selected on the basis of grades and an interview, and had arranged for all candidates to undergo the required medical examination for an Australian visa.

I thought we were ahead of schedule as we were only left with travel documents to obtain. But I was soon proved wrong. None of our students had passports or any form of official identification. To apply for a PNG passport, one needs either a national identity (NID) card or a new version birth certificate (the old blue birth certificate is no longer accepted). The National Identity (NID) Project was first introduced in late-2014 with the intention of registering all PNG citizens in a central database for voting and identification purposes. The NID registration process is done via a new Civil and Identity Registration System which includes the issuance of both an NID card and a new version of the birth certificate that incorporates better security features.

To inquire, I went to the NID Haus in Waigani on two occasions by myself. I was told to leave on the first occasion after waiting for more than two hours, as NID stopped serving for the day due to overcrowding. Some who started queuing as early as nine in the morning faced the same fate as me and I later learned that it is not uncommon for this to happen. On the second occasion, I arrived at NID Haus at 7am and got hold of a NID’s officer’s mobile number from the front office. However, the number was later found to be not in service. I gave up queueing when I was instructed to join the long queue again just to follow up on my original inquiry.

I did not fare any better when I got in touch with the NID via UPNG. We were promised twice to have NID officers to attend our group registration on campus on different days. Not only did they not turn up, but no reasons were provided for their absence. Calls were often not answered and when they did, the common answer given was the mobile registration squad was simply too busy. Every time an appointment was made with NID, students had to skip classes for more than an hour just to wait for the arrival of the officers. On the third appointment, an officer showed up an hour late and managed to register all students.

This was already mid-September, about seven weeks after we finalised our list of candidates.

The story did not end here. Subsequent follow-up with multiple visits and daily calls to NID on the following week led to the discovery that none of our students’ records were properly processed in the system. Knowing well enough that bringing this matter over the counter might take weeks if not months to be resolved, I knew I had to escalate it. I went straight to the NID Registrar General, explaining the urgency of the matter and providing supporting letters from the Development Policy Centre and UPNG Dean’s office to facilitate the process. He was kind enough to fast-track our applications. But then we were told by staff that the only operational card printing machine in the office had broken down and they have run out of toner for the birth certificate printer. We were not given a definite timeline regarding when the printer would be fixed or when a new batch of toner would arrive. Our applications were delayed once again.

By this stage, we were doubtful that the students would be able to make it to Australia for the summer school . Students usually return to their respective provinces when semester ends. Many came from remote parts of the country. Thus, it was really important that our students had their passports ready before the semester ended in mid-October.

In the end, we were fortunate enough to get at least their birth certificates in early October, more than two months after we first contacted NID. With the new birth certificates, we could apply for passports, which we received after only a short delay. Their Australian visas came through before they left Port Moresby. As of today, six months since the applications were submitted to NID, the students are yet to receive their NID cards.

The point of this article is not to dispute the merits of the NID project, but to provide a firsthand account of the reality facing the general public in the process of applying for NID cards and birth certificates. We were blessed enough to have institutional supporting letters at different stages to facilitate our students’ applications and it still took us two good months to get birth certificates and passports, and the students still don’t have NID cards. Think how much harder it would be for an ordinary citizen with inflexible working hours and no transport to consistently follow up with NID. No doubt this helps explain the low registration rate, with only half a million registered in four years despite the government spending more than 230 million kina.

It’s been good to see the Planning Minister promise an overhaul this year, with a target of two million cards to be issued by the end of the year. Let’s see if the students who’ve just returned get their cards, and whether it’s easier to get cards for the next batch of students for the 2020 summer school. I certainly hope so. It’s  a great experience if you can make it!