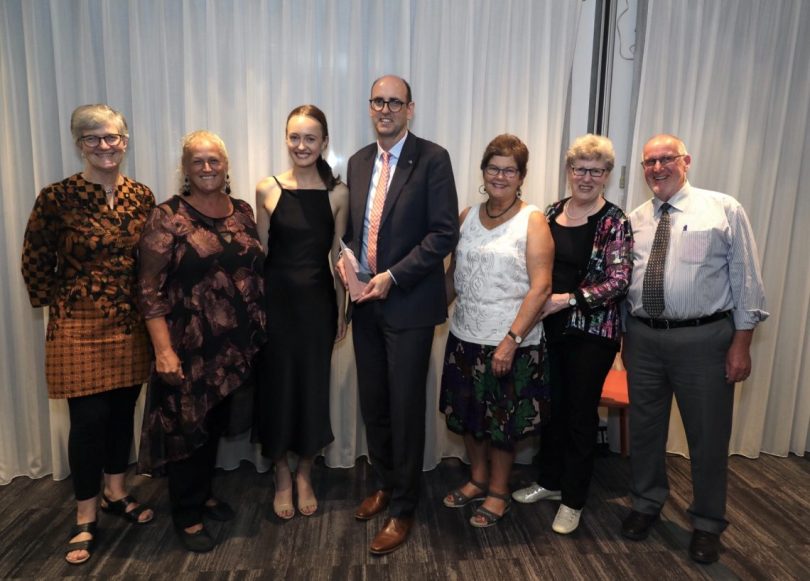 The 2020 Mitchell Humanitarian Award was presented to Mark Sullivan and John Reeder in a ceremony at The National Museum of Australia on Tuesday night. The award recognised their contribution, described in this essay, to end the debilitating disease onchocerciasis, more commonly known as river blindness, through navigating complex drug development pathways to make a better treatment available for patients.

River blindness, caused by worms transmitted by blackfly bites, is endemic in 31 countries and approximately 20 million people are currently infected, including more than a million with vision loss. Other symptoms include skin disfiguration.

While use of the drug ivermectin since the 1980s has made substantial gains on treating cases of river blindness, it has limitations: one-third of those treated did not clear the worms from their body, while most had the worms return within three months of treatment. The frequency of treatment needed in often remote locations was reducing the possibility of eliminating the disease.

Twenty years ago, an alternative and potentially more effective medicine began to be examined for use, moxidectin. Subsequent studies showed it was more effective in controlling the worms behind the disease. Yet obtaining market authorisation for a drug with little chance of making a profit was a significant hurdle for its supporters to overcome.

This is the where the work of two Australians became crucial – John Reeder, in his role as head of the UN-based Special Programme for Research and Training in Tropical Diseases, and Mark Sullivan, a drug development industry expert who went on to found the organisation Medicines Development for Global Health.

Their efforts and expertise in navigating the complex processes involved in drug development led to moxidectin being approved by the US Food and Drug Administration in 2018 for use in river blindness for patients aged over 12 years. This was the first case of an Australian-sponsored novel drug achieving FDA approval, and the first case of a non-profit organisation achieving approval without a pharmaceutical industry partner.

Mark continues his work on moxidectin, as it has been identified as a possible cure for scabies, a major health problem in remote Indigenous communities here in Australia.

The Mitchell Humanitarian Award was given to John Reeder and Mark Sullivan in recognition of their live-saving contribution, and its demonstration of the capacity of Australian medical researchers and experts to make a difference to health both in Australia and worldwide, and of the ability  of public-private partnerships to propel change.

“I’m honoured to receive this award, and particularly honoured to be nominated alongside John. We represent the efforts of our organisations to make this medicine available over a 20-year timespan, work that we are very proud of,” said Mark.

“I am delighted to receive this award, that honours the work of many scientists, in many places, across many years,” added John.

“There did come a time though, that to get this drug across the line into registration required stepping beyond the research with a certain single-minded stubbornness, a willingness to take a risk and an ability to keep a sense of humour under fire. Perhaps not so surprising that I found these qualities in fellow Australian Mark, whose partnership allowed us to push on down that last hard mile to success.”

The Mitchell Humanitarian Award is named after Mr Harold Mitchell AC, a leading Australian businessperson and international philanthropist, and is awarded by the Development Policy Centre at The Australian National University. The Award is given annually to recognise a contribution to the cause of international development which inspires others, which is of lasting and significant value, which has a link to Australia, and which has not yet been adequately recognised.

The shortlist for this award is made up of those whose stories are told in the Development Policy Centre’s Aid Profiles over the last 12 months. They include Sally Lloyd, a lifelong community development worker in Papua New Guinea who shone a light on the devastating impact of PNG’s 2015 drought, and Glenyys and Graham Romanes, a trailblazing couple whose remarkable careers and lives have traversed the response to the Ethiopian famine and war, domestic policy and politics, and rethinking gender equity at home,

Mark Sullivan accepted the Mitchell Humanitarian Award trophy and prize on behalf of the pair at the 2020 Australasian Aid Conference dinner on 18 February in Canberra. Mark and John are contributing their $10,000 prize to support the work of the Healthy Mothers, Healthy Babies collaborative research program at the Burnet Institute.

Read the full profile on Mark and John’s contributions here, and all three Aid Profiles here.