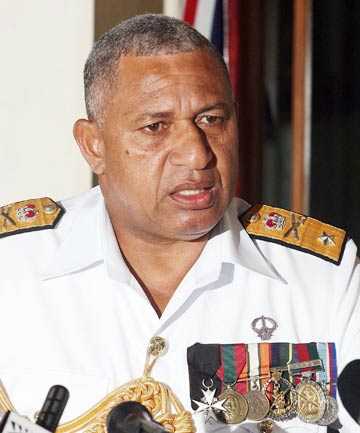 Even for hardened political junkies, the events of yesterday were numerous, varied and a lot to take in. In Vanuatu, Fiji and Australia the chatter in real and virtual forums went on late into the night about what had happened, what might happen next and what it all might mean.

It started with an announcement that there would be an announcement [pdf] at 6 p.m. Fiji time and so it transpired that the interim regime presented its draft constitution [pdf] to the country, the region and the world. But then as the right hand gave, so the left hand took away… the role of a constituent assembly in reviewing the draft. In what Commodore Bainimarama described as a ‘modification’ to the process he declared that the entire nation of Fiji would act as the constituent assembly and that they had until April 5th to provide feedback on the draft document. It is not clear what will happen to that feedback (should any be received) but it is envisaged that the constitution will be implemented no later than April 12th, 2013. This, according to the interim prime minister, is to provide for fulfilment of the regime’s commitment to hold democratic elections no later than 30th September 2014. The derogation from the use of a nominated constituent assembly to consider and finalise the constitution was blamed on failings on the part of political parties to comply with the decreed registration requirements with the attendant claim that this does not provide for a ‘conducive’ climate for the process as previously envisaged.

No doubt others will analyse the provisions of the constitution in more detail, including the extent to which the content of the Ghai draft has been incorporated into this iteration. Here, I will highlight some key points only, by way of starting that discussion.

The draft constitution provides for a unicameral Parliament comprising 45 seats (it also provides for the distribution of those seats across four electoral divisions of the country). The electoral system will be by way of proportional representation in multi-member constituencies. (Earlier this year, Norm Kelly undertook an analysis [pdf] of how differing voting systems might play out in the Fiji context). Holders of public officers (as defined) are deemed to have vacated such offices on or before the date on which their nominations to stand as electoral candidates re submitted to the relevant returning officer. Whilst members of the Republic of Fiji Military Forces are considered to be holders of public office, the prime minister, the leader of the opposition and ministers are not. It remains unclear as to how his will affect those members of the military who are currently occupiers of ministerial positions, in an interim capacity.

The role of the military is stated in the following terms: “It shall be the overall responsibility of the Republic of Fiji Military Forces to ensure at all times the security, defence and well-being of Fiji and all its residents.” Perhaps of more significance is chapter 10 of the document, which covers immunity. The immunities granted by the 1990 constitution and the Limitation of Liability for Prescribed Political Events Decree of 2010 are continued into force. Further immunities are provided to a list of prescribed persons from “from any criminal prosecution and from any civil or any other liability in any court or tribunal, in any proceeding including any legal, military, disciplinary or professional proceedings and from any order or judgment of any court or tribunal, as a result of any direct or indirect participation, appointment or involvement in the Government from December 2006 to date of the first sitting of Parliament elected after the commencement of this Constitution”. For good measure the constitution ousts the jurisdiction of the courts to consider challenges to such immunities and precludes Parliament from amending or revoking the immunity provisions of the constitution.

There is more to say about the content of this document but what is of more interest and significance is how it fits into the process by which the interim regime makes good (or otherwise) on the commitment to hold democratic elections. The process is becoming increasingly opaque and hard to predict. There continues to be speculation as to whether there will be early elections, what exactly the elections will look like should they take place and what the ongoing implications will be for Fiji in particular and the region more widely.

Yesterday started with a great deal of anticipation as Parliament prepared to debate a motion of no confidence tabled by the Opposition. There was a great deal of confidence in the ranks of the would-be government claiming they could rely on the support of between 28 and 31 members (out of 51) of the House. Parliament convened, the Speaker identified that the only matter of business was the motion of no confidence and then read out a letter of resignation from the prime minister, Sato Kilman. He subsequently ruled the motion to be no longer in order and closed the session despite attempts from the Leader of the Opposition and others seeking to put forward an amended motion to elect a new prime minister there and then. As things currently stand, the Deputy PM Ham Lini is now acting as prime minister and Parliament will reconvene in an extraordinary session on Friday March 29th. As we know, a week is a long time in politics and the Opposition is not willing to risk losing the momentum it has established so a constitutional application to challenge the Speaker’s rulings has been lodged and will be heard this morning. Should the challenge be successful the Opposition will seek orders to have Parliament sit this afternoon to elect a new PM. Even if there is a change of government it is not yet clear who will be the new prime minister as the Leader of the Opposition, Edward Nipake Natapei, has stated that he does not want the job.