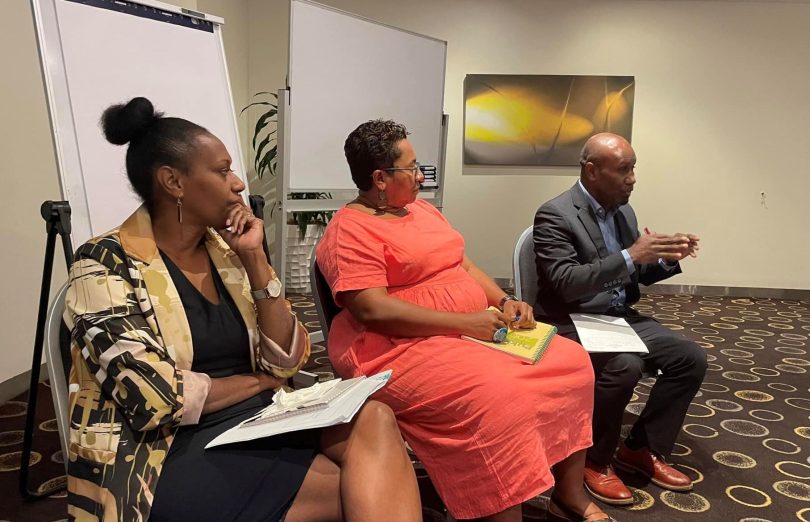 The Vanuatu Skills Partnership had the privilege of presenting on the theme of localisation at November’s Australasian AID Conference, hosted by the Development Policy Centre. The panel was chaired by DFAT and organised by the International Development Contractor Community, with the intention to drill down into the realities of locally led development cooperation, and away from the rhetoric of the latest industry buzzword. Clearly, this is an area of considerable interest; more than 30 people had to be turned away at the door due to the room reaching its capacity limit. Considering this, and the feedback we have received about the usefulness of the presentation to operationalise localisation within the context of a donor investment, we offer a summary here.

The Vanuatu Skills Partnership commenced in 2005 as an AusAID-funded project implemented under a managing contractor modality. As is all too common in the aid industry, the original design was premised on an entirely false assumption – that structural reform of the national skills system could occur by linear “capacity building” activities implemented as per an externally designed, predetermined logframe. The project was led by an international team leader, with a large number of long-term, full-time international “technical advisers”. All local staff were in junior administrative and logistical positions. And the managing contractor had all power to determine strategy, staffing and funding allocations, in consultation with the donor.

This power dynamic was itself a product of the original false assumption around why Vanuatu’s education and training system was dysfunctional and ineffective – it was apparently a lack of money and technical expertise, which outsiders could provide, that was the main factor behind the dysfunctionality. But this was simply the tip of the iceberg. The root causes lay well below the surface – a complex intersection of resource distribution, corruption, normalised behaviours, and relationships and allegiances – and were ones that no foreign outsider had the local intelligence, legitimacy and influence to shift. Like many others around it, the project had set itself up to “fix” deep structural problems, but was operating in a superficial bubble, disconnected from the surrounding realities of blockers and drivers of change.

Due to a series of unexpected events, a new team leader, with an unconventional background for such a role, was appointed. She did not have the usual multi-country technical experience, but she did know her history: that no sustainable, systemic change, in any sovereign country at any time, has ever taken place primarily through external actors.

The first thing the team leader realised was that her most useful function was as an identifier, incubator and promoter of local developmental leadership. Moreover, rather than being a “doer” of development, the focus of the investment became to facilitate and convene development processes, using its relative neutrality to bring together diverse “green shoots” of reform momentum. Critically, this also meant supporting a local staff member to take on this politically savvy convening role – the first-ever ni-Vanuatu as a team leader of an Australia-funded initiative.

With the backing of a DFAT country team that was open to innovation, the Partnership undertook a new design process, led by the ni-Vanuatu team leader, which did not see the main problems of Vanuatu’s skills system as needing to be solved by technical “experts”. This was underpinned by a granular political economy analysis, and understanding that the implementation team would need to work relationally and politically to navigate these thorny challenges. It also meant building in an authorising environment for adaptive management, so that planning and activity could flexibly respond to evolving entry points for coalition-building and reformist appetite. Documentation would then be revised based on these adaptations, rather than stifling adaptation through its dictates.

More testingly, it also meant removing international personnel who did not comprehend or accept that they were no longer to operate as the “star player” in another country’s development process, and needed to embrace a subordinate and facilitative position. This extended as far as the replacement of the managing contractor, which similarly failed to grasp that imposition of “one-size-fits-all” processes and systems was detrimental to supporting the complexity of social change in a unique Pacific Island operating context.

Finally, there was a realisation that language needed to change. Within the aid industry, false assumptions and patronising approaches have been perpetuated by ubiquitous jargon of the sector. Examples of changes include:

Through this journey from “projectisation” to “localisation” – or more accurately, local leadership – the Vanuatu Skills Partnership has achieved significant, systemic results. It has catalysed a complete restructure of the Ministry of Education, including the provincial skills centres it originally established being formally integrated into the government system. Staff in these centres are now employed under the national Public Service Commission, and the Partnership’s funding mechanism has been expanded into a National Skills Development Fund with annual contributions from government departments. The Partnership’s collective action has led to transformation of provincial economies in tourism, handicraft and construction sectors, and it is nationally recognised as the key service delivery reform mechanism for the government’s decentralisation agenda.

While the details are still being worked out, the plan is now for the Vanuatu Skills Partnership to become a local entity, and to receive DFAT grant funding directly rather than via a support contractor. By changing thinking, programmatic structures and language – and with the longstanding support of a committed donor – it stands as evidence to the development industry that translating the rhetoric of localisation to reality is possible, and indeed is the only way for sustainable development to occur.

Fremden Yanhambath is the Director/Team Leader of the Vanuatu Skills Partnership, a position he has held since 2015.

Anna Gibert is the Strategic Support Officer for the Vanuatu Skills Partnership and former Team Leader.