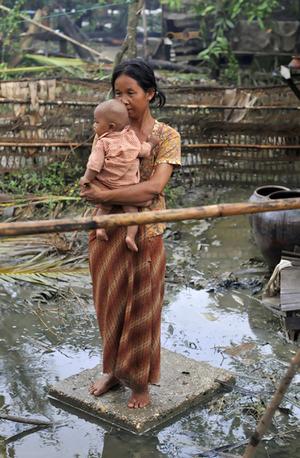 More aid and lending opportunities are opening up for Myanmar, with the US announcing this month that it would lift its restrictions on international financial institutions such as the World Bank and Asian Development Bank lending to the country to assist it with its transition to democracy, following a decision by the US Congress in September.

Japan has also signalled that it will resume yen loans to the nation to help its ‘sustainable economic development’.

UNDP recently announced an ambitious US $144 million program over three years to assist the most marginalised.

However, even with this recent elevation of Myanmar in the eyes of donors, many in the country are still missing out on assistance. According to a new report by the Kachin Women’s Association Thailand (KWAT), at least 60,000 of the estimated 100,000 Kachin civilians along the China-Myanmar border are surviving on boiled rice alone.

South Asia has the highest levels of hunger in the world, according to the 2012 Global Hunger Index released on World Food Day by the International Food Policy Research Institute (IFPRI), with Bangladesh, India and Nepal among the region’s poor performers.

However, agricultural land ownership farming is still a contentious food security-related issue in many Asian countries, including Cambodia, where authorities have started resorting to violence in land tenure disputes. In India, some 60,000 landless rural farmers called off a planned mass protest this week after the government resolved to process land disputes more quickly and transparently.

The amount of committed but unused foreign aid for Bangladesh has reportedly grown to US$16.3 billion. The underspending has been blamed for holding back various development projects in the country.  JICA has reportedly expressed ‘unhappiness’ over the Bangladesh Bank’s failure to start loan disbursement under a program to support SMEs. JICA made an initial payment of one billion yen in March this year. However, the country’s central bank had not yet distributed the loans to successful applicants.

In a move hailed as ‘remarkable’, the government of Indonesia has quietly made an order to override the patents on seven medicines used to treat Hepatitis B and HIV to allow cheap versions to be made by local companies. The move has been praised by activists pushing for cheaper drugs to be available for patients in developing countries, including the NGO Medecins sans Frontieres.

Additionally, a malaria treatment drug made by India’s Cipta has gained pre-approval from WHO, an important step in its potential rollout across Asia.

Vietnam sets its sights on space

Vietnam is aiming to build its first space centre by 2020, and Japan will be funding the bulk of it. The centre is expected to cost some US$700 million, of which the majority will come from Japanese ODA.

A ground breaking ceremony took place for the centre in late September outside Hanoi – and the first Vietnamese-made satellite took to orbit this month. A total of 350 engineers and scientists would be trained to work at the centre.

Vietnam is planning to use the space centre to compile its own data on climate change to create disaster risk reduction strategies.  While Vietnam is not the only Southeast Asian country with space facilities (Thailand and Malaysia have also invested in the area, though on a smaller scale), it’s certainly an interesting use of ODA.

Does Asia need both the banks?

Widespread flooding in northeastern India has forced some two million to flee their homes as relief efforts continue.

A new occasional paper from the Open Society Foundation looks at who benefits from US military aid to Central Asia.

The IMF has admitted that austerity advice it gave countries in Asia during the 1998 crisis might have created economic damage three times larger than previous estimates.

Russia has forgiven $11 billion it was owed by North Korea, some 90 percent of the debt the country had incurred since the Cold War.

Pakistan has been praised by the Asian Development Bank President for maintaining its macroeconomic stability.

Thailand is making more steps to move from recipient to donor, with its government having pledged some US $77 million for development work in the Greater Mekong Region.

Singapore is set to help the Indian city of Bangalore to improve water management systems.

USAID has filed a fraud accusation against the largest anti-trafficking NGOs in the Philippines.

A new draft paper [pdf] by Takashi Yamazaki examines in part how Japan has used ODA to secure sea lanes.

Australia has announced a change of approach to the controversial Cambodia Railway Rehabilitation Project, in conjunction with ADB and the Cambodian government.

Two volunteers with the Korean International Cooperation Agency were killed in Sri Lanka after being struck by lightning.

The Asian Development Bank will finance Sri Lanka for US$130 million to improve the quality and reach of the country’s power grid, while Korea is contributing to build the country’s first sanitary landfill facility.